As auditory , aural or acoustic perception or hearing is called the sensory perception of sound by living beings , more precisely z. B. the auditory events that occur during certain sound events . Sensory organs , which are stimulated by vibrations from the living being's environment, serve to perceive the sound . The vibrations can be transmitted via the surrounding medium (air, water) or via the subsurface (vibrations). The sense of hearing is not always tied to the ears ; Vibrations in particular can also be perceived or felt by sensory organs on corresponding parts of the body. 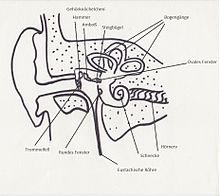 The hearing organ of mammals consists of the ears ( outer ear , middle ear and inner ear ):

The hearing organ of mammals has a high spectral resolution because it contains sensory cells in the cochlea for many different frequencies of sound . Such hearing is already present in early vertebrates . Both the balance organ and the hearing organ arose from the lateral line organ of the fish. This changed in the course of evolution u. a. through the development of the ossicles (originally parts of the primary jaw ). The stirrup is already found in amphibians , hammer and anvil are found exclusively in mammals. 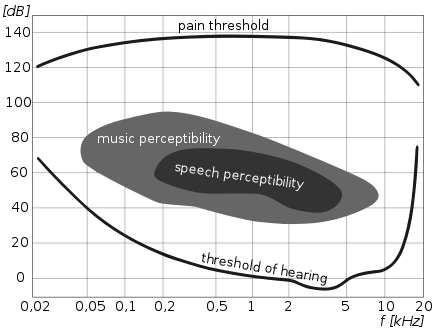 Compared to the sense of sight , the hearing can distinguish two signals following each other relatively well, because unlike the eye it does not have to break down chemical substances and put them back together again. Humans can perceive up to around 20 signals per second as individual, separate events. If the sequence is faster, these blur into a single tone that represents the lowest audible frequency.

Hearing or auditory perception can be broken down into peripheral and central sub-processes:

Hearing and auditory perception impairments are:

An audiogram describes a person's subjective hearing sensitivity. The ear is a sound pressure receiver , as is a microphone with the directional characteristic of a sphere, i.e. i.e., it is sensitive to sound pressure alone .

ENT medicine and the hearing aid industry in Germany have been organizing Hearing Day since 2010 .

The perception of directions ( localization ) and hearing in a certain direction ( cocktail party effect ) is achieved on the one hand by "offsetting" the information from both ears. To this end, the brain uses time differences and level differences between both ears, whereby the ear distance plays a role (see the duplex theory of Raleigh ). On the other hand, directional hearing also takes place via a single ear (monaural) by offsetting the direction-dependent filtering of the sound spectrum at the auricle and the external auditory canal ( directional frequency bands ). Monaural directional hearing also only enables localization in the median plane (top-bottom, front-back).

Unlike mammals, fish have neither a cochlea nor an eardrum . The sound vibrations of the water are transmitted to the skeleton of the fish and further to otoliths (small auditory stones) that are located in an inner ear. The vibrations set them in motion and stimulate sensory hair . In some species the vibrations are amplified by the swim bladder acting as a resonance body . Furthermore, most fish and also some amphibians (e.g. tadpoles ) can perceive water vibrations with the lateral line organ .

In terrestrial vertebrates such as amphibians, reptiles and birds, sound is transmitted (with a few exceptions) via the eardrums and ossicles to the inner ear. In contrast to that of mammals, this is shorter and not rolled up in a cochlea .

In addition to the vertebrates, however, a number of other animal groups have hearing. All insects that produce sounds for communication have hearing organs that can be structured differently. These include, for example, the long-sensor terrors , the short-sensor terrors and the cicadas . Many fishing rods can even sense ultrasound , which bats send out to locate their prey.

In the class of insects, body hairs are widespread, which - stimulated by sound waves - begin to vibrate. Due to the resonance phenomenon, certain hairs vibrate more intensely at specific sound frequencies. This specificity depends on the stiffness and length of the hair. For example, some species of caterpillars have been able to evolve hairs whose resonance frequency is tuned to the sound of buzzing wasps, so that the caterpillars are informed in good time about the presence of the predators. Mosquitoes also have hair on the antennae that is specified for the flight noise of females of the same species, so that the males can recognize their potential sexual partners.

Some insects also have a tympanic organ . These are "eardrums" that cover air-filled chambers on the legs. Similar to the hearing process in mammals, the eardrum is stimulated to vibrate by sound waves. Receptors attached to the inside convert the vibration into electrical signals and transmit them to the brain.

Classification according to external and internal stimuli: Exteroception  | Interoception