The acoustics is a field of acoustics , which deals with the impact of the structural conditions of a room to be held in his sound events. The focus of room acoustics is the design of the perceptibility of sound events by users of concert halls, theaters, assembly halls, classrooms, television and radio studios, churches and other rooms in which acoustic performances are made accessible to many listeners (technical room acoustics). Room acoustics also play an increasing role in everyday rooms (schools, restaurants, shopping centers, open-plan offices, etc.) and are included in the planning.

The aim of the planning is to adapt a room as well as possible to its intended purpose and the existing communication scenario. The characteristics of human hearing , the particularities of speech perception as well as subjective listening habits ( psychoacoustics ) and musical aesthetics must be taken into account.

The acoustic impression of a room is determined by

The task of room acoustics is to influence these parameters through room design in such a way that the acoustic properties of the room fit as well as possible to its intended purpose.

The goals of room acoustic design can be:

Since the room acoustic properties are practically incompatible for different applications, it is hardly possible to create a universal room that combines good speech intelligibility and a good spatial music experience. If this is nevertheless required, either the room has to be redesigned depending on the application (e.g. by pulling up heavy curtains in the concert hall for speech or creating additional reflection surfaces in the lecture hall for music), or the rooms have to be provided with electroacoustic sound (e.g. by distributing loudspeakers in the lecture hall, which are controlled by appropriate effects devices and thus simulate wall reflections and reverberation). 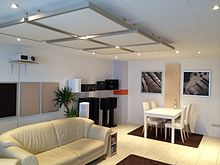 Especially for music performances, the optimization of the room acoustics is achieved not only by installing sound absorbers but also by attaching diffusers . These dissipate the sound field in such a way that better perception is possible without causing over-insulation. The use of electroacoustic reverberation extension systems is also an option.