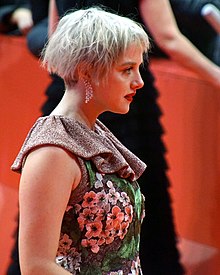 Jella Haase at the opening evening of the Berlinale 2020 , in which she plays a leading role in the competition film Berlin Alexanderplatz .

Jella Haase started acting as a child. In 2009 she was in front of the camera for her first short film, and she played her first leading role in the TV film Mama is coming! Other television productions followed, including two appearances in Polizeiruf 110 . In 2010 she was seen in six episodes of the transmedia project Alpha 0.7 - The enemy in you of the SWR .

In 2011 she was in the hearts of men ... and the really, really big love was shown in the cinema for the first time. In the same year she took on a leading role in David Wnendt's neo-Nazi milieu study Kriegerin . For this portrayal and her role in Lollipop Monster , which was also released in 2011 , she received the award for best young actress at the Bavarian Film Prize 2011 .

At the beginning of 2013, the Tatort puppeteer was broadcast, in which Haase portrays an underage prostitute who lets herself be filmed having sex with a judge and then tries to blackmail him with the video. In June 2013 she received the Günter Strack Television Award for best actress.

In the movie comedy Fack ju Göhte , the most popular German film of 2014, Haase was seen as a proletarian student Chantal. For this achievement she was nominated for the German Film Award for Best Supporting Female Role . She also took on the part of Chantal in the sequels Fack ju Göhte 2 (2015) and Fack ju Göhte 3 (2017). For the second part she won the Bavarian Film Prize and the Jupiter Film Prize together with Lena Klenke and Gizem Emre . In addition, Haase was honored as a German Shooting Star at the 2016 Berlinale . In the same year she took on the role of police trainee Maria Mohr in Tatort Auf ein Schlag (2016).

For her portrayal of the noble prostitute Mieze in Burhan Qurbani's feature film Berlin Alexanderplatz , Haase received a 2020 nomination for the German Film Prize for the best female supporting role .