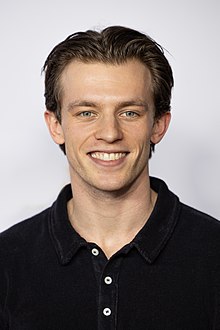 Niewöhner, the son of a regionally known theater maker, started his acting career at the age of ten in the Tatort episode Facts, Facts ... directed by Susanne Zanke. This was followed by other film and television productions, such as Christian Zübert's feature film The Treasure of the White Falcons in 2004 and a guest appearance at SOKO Cologne .

He first gained fame through his role as Peter 'Tim' Carsten in the movie TKKG - The Secret of the Enigmatic Mind Machine . In the movie The Wild Chickens and Love , he played the role of Maik . In 2008 he starred as Lars in the film Sommer at the side of Jimi Blue Ochsenknecht and Sonja Gerhardt . For this role he was nominated in the same year for an Undine Award in the category of best young supporting actor in a feature film. Together with the Ochsenknecht brothers Jimi Blue and Wilson Gonzalez as well as Emilia Schüle , he played in the youth drama Gangs by Rainer Matsutani in 2009 . Also with Schüle, Niewöhner appeared in 2010 in the youth film Freche Mädchen 2 , in which he played Antony .

At the age of 16 he applied to the Berlin Academy of Dramatic Art Ernst Busch , but failed the entrance exam. After graduating from high school, he devoted himself exclusively to his film career.

In 2012 he took on the leading role of Gideon de Villiers in Rubinrot , the film adaptation of the first part of the book series Love Goes Through All Times by Kerstin Gier . The film opened in German cinemas in 2013. For its sequel, Saphirblau , he took on this role again in 2014. In 2013 he was alongside Emilia Schüle in the television films Heroes - When Your Country Needs You and In a Wild Country . In 2015 he again played the role of Gideon de Villiers in the third and last part Emerald Green , for which he received the Jupiter Award in the category Best Actor national , as well as that of Milan in the film Ostwind 2 .

After numerous appearances in youth films, Niewöhner initially struggled to be cast for more demanding roles. His breakthrough came with the psychiatry drama 4 Kings (2015). The role of the aggressive Timo was followed by the European Shooting Star award at the Berlinale in early 2015 .

A year later, Niewöhner was honored for his portrayals in the dramas Jonathan (2016) by Piotr J. Lewandowski and Jugend ohne Gott (2017) based on Ödön by Horváth Niewöhner as the best young actor at the Bavarian Film Prize 2016 . After the historical three-part television series Maximilian - The Game of Power and Love (2017), he took on roles in the comedies High Society by Anika Decker (2017) and in Asphaltgorillas by Detlev Buck (2018). In 2017 and 2018, Niewöhner also had smaller appearances in the international productions Berlin Station and Mute .

At the end of 2017 he played the drug addict techno club promoter Robert 'Beat' Schlag in the Amazon Prime series Beat , directed by Marco Kreuzpaintner , who is recruited by the secret service and involved in a criminal case involving the trafficking of arms, human beings and organs. For his portrayal in Beat , Niewöhner received the Grimme Prize in 2019 as well as the Jupiter Award for Best TV Actor nationally and was nominated for the i-Emmy in the Best Performance by an Actor category.

At the beginning of 2018, he took on the role of a young father from a precarious background who is fighting for custody of his three children in Barbara Ott's feature film debut Kids Run . Later that year, the film adaptation of the Hermann Hesse novel Narcissus and Goldmund took place under the direction of Oscar winner Stefan Ruzowitzky , in which Niewöhner was cast alongside Sabin Tambrea as Narcissus for the role of Goldmund (theatrical release 12. March 2020). In 2019 Niewöhner shot Moritz Bleibtreu's directorial debut, the psychological thriller Cortex , the Siegfried Lenz film Der Überläufer , directed by Florian Gallenberger and Je suis Karl by Christian Schwochow .

In March 2020 and after a pandemic-related break from June 2020, the filming of Confessions by the impostor Felix Krull based on the novel by Thomas Mann with Niewöhner in the title role took place.

Since 2018 he has acted as an ambassador for the German Film Prize together with Emilia Schüle and Kostja Ullmann .

Jannis Niewöhner has lived in Berlin since 2011 . From 2008 to 2015 he was in a relationship with fellow actor Emilia Schüle .