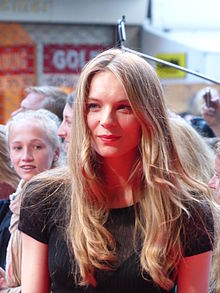 Stangenberg grew up in Berlin-Kreuzberg . She attended the Free Waldorf School in Kreuzberg , where she learned Russian and did an internship in a children's home in St. Petersburg . Stangenberg began her acting career at the P14 youth theater of the Volksbühne Berlin . Without any acting training, she was then engaged at the Theater Basel and the Schauspiel Hannover and was in the ensemble of the Schauspielhaus Zurich from 2009 to 2012 . At the same time she also worked for film and television. In 2010, she was supported by the trade magazine Theater heute for Promising Actress of the Year chosen. From 2012 to 2016 she was part of the ensemble of the Volksbühne Berlin on Rosa-Luxemburg-Platz .

As a film actress, Stangenberg was best known in the multi-award-winning leading role in Nicolette Krebitz 's feature film Wild , in which she plays a young woman who has a relationship with a wolf . In October 2018, she played the main episode role in the television film Tatort: ​​Blut , a woman suffering from a light allergy who believes that she is a vampire . In Orphea , the film adaptation of the Orpheus myth with reversed gender roles by Alexander Kluge and the Filipino artist Khavn, she embodies the title role. The film celebrated its world premiere at the Berlinale 2020 in the newly established Encounters section .