This article covers the singer and poet from Greek mythology. For more meanings of Orpheus, see Orpheus (disambiguation) .

Hermes, Eurydice and Orpheus (relief in the Villa Albani , Rome)

There are various legends about the figure of Orpheus. According to unanimous ancient tradition, it came from Thrace , even if the so-called landscape was generously extended and included Macedonia . Pierien in the northeast of Mount Olympus in particular is mentioned by the majority and in the oldest traditions as his home, specifically Dion in particular claimed to be Orpheus' birthplace. He was born the son of the muse Calliope . His father was the Thracian king and river god Oiagros (or, according to other traditions, Apollo ). Apollon, the god of music, gave him a lyre that Apollon had received from his half-brother Hermes . Orpheus was considered the best among the singers; he bewitched gods, humans and even animals, plants and stones. The trees bowed towards him when he played, and the wild animals crowded peacefully around him, and even the rocks wept at his beautiful song. 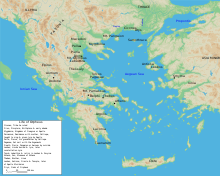 The Argonauts took him on their way to obtain the Golden Fleece . Orpheus sang so beautifully that he even conquered the angry sea and enemies with the magic of his lyre. While driving, he is said to have drowned out the sirens with his singing .

Orpheus' wife was the nymph Eurydice . When Aristaios tried to rape her, according to Virgil's story in the Georgica , she died while fleeing from a snakebite, which Aristaios was charged with. Orpheus went into the underworld to move the god Hades through his song and the play of his lyre to give him back his wife. His art was so great that even the hellhound Kerberos stopped barking. So his request was granted - but on the condition set by Hades and Persephone that he should go ahead on the ascent into the upper world and not look around for Eurydice. However, since he did not hear the steps of his wife behind him, he looked around and she disappeared again into the underworld.

The singer was close to the muses and thus to the god Apollo, but not to Dionysus , the god of intoxication and extravagant, wild parades and chants. Orpheus, as Ovid reports , was torn apart in his homeland by " maenads ", intoxicated followers of Dionysus. According to ancient beliefs, it was no consolation that he could now join the shadow of Eurydice as a shadow. In later adaptations of the myth, the motive for the murder is cited as being that Orpheus renounced his love for women and developed into a misogynist or even turned to the love of boys, which, as Ovid claims, he was the first to have taught the Thracians. However, his head and lyre were thrown into the Hebros River , they swam down into the Aegean Sea and were washed ashore on the island of Lesbos . The head kept singing until Apollo told him to be silent. His grave is said to have been in the city of Leibethra - other sources also name this city as the birthplace of Orpheus and the river in which his head was found, Meletos . His lyre was moved to the sky as a constellation .

Orpheus may have had historical models and was possibly a reformer of the Dionysus cult . His myth embodied the immortality of the soul and combined strong oriental influences with the Thracian roots. The Greeks ascribed the invention of music and dance to him.

Interpretation of Orpheus in early Christian apologetics and art

Since Clement of Alexandria , Orpheus has been interpreted as a prefiguration of Christ and corresponding interpretations can also be found in Eusebius of Caesarea , Cyril of Alexandria and Augustine , who called him a "poeta theologus". His descent into the underworld has been compared to Christ's descent into the dead ; while Orpheus finally had to leave his beloved behind, Christ broke the gates of hell and led the prisoners of the deep into heaven. Orpheus bewitched the wild animals - Christ the sinners. In the 5th century Orpheus was described as the prophet of Christ.

Classic Orpheus motifs also appear in early Christian art, which can be seen as depictions of Christ. Often these are connected with the motif of the Good Shepherd and show a lyre player with sheep at his side.

The Christian Orpheus motif persists into the late Middle Ages. With the renaissance and the renewed engagement with ancient motifs, the Orpheus representations were largely no longer intended to be Christian from around the 16th century.

The work of a poet also called " Orpheus " is received in the old church.

The myth in art

Name vase of the Orpheus Painter in the Antikensammlung Berlin , red-figure vase painting , middle of the 5th century BC Chr.

In the opera in particular , the story of the singer who tries in vain to win back his lover from Hades has always remained alive, although in Christoph Willibald Gluck's opera Eurydice does not have to return to the underworld, but is allowed to stay with Orpheus. There are numerous Orpheus operas . 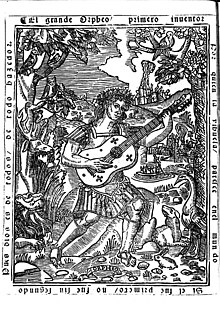 An Orpheus playing the vihuela , from El Maestro by Luis Milán , 1536

Musicians in particular took up the story of the singer, who soothed wild animals and even the gods of the underworld with his music:

The tragic love story is u. a. tells at

Some literary versions and arrangements: 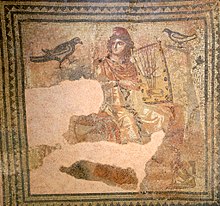 Anita Rée: Orpheus with the animals , mural in the ballet school of the Hamburg Ballet , around 1930

Orpheus in the circle of wild animals listening to his music is a popular theme in Roman mosaic art :

The scene in which Eurydice reaches out her hand to Orpheus on the rise from the underworld was a popular motif in sculpture even in antiquity.

Motifs from the Orpheus legend are also taken up in the Middle Ages and in modern art:

The myth in the visual arts

The myth in literature

The myth in the film

The myth in class