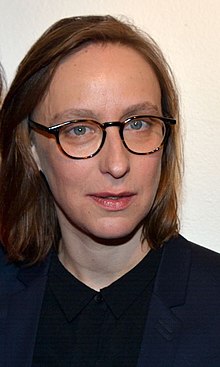 Celine Sciamma (born November 12, 1978 in Pontoise ) is a French screenwriter and film director .

Sciamma grew up in a Paris suburb. She graduated from the University of Paris-Nanterre with a degree in French literature . Then she studied from 2001 to 2005 at the film school La fémis specializing in screenwriting . In 2004 and 2006 she wrote screenplays for two short films by Jean-Baptiste de Laubier, alias Para One .

Sciamma made her debut in 2007 with the feature film Water Lilies (original title Naissance des pieuvres ) as a director. The film premiered in Cannes and achieved international success. Her second feature-length film, Tomboy , opened the panorama section of the Berlinale 2011 , while her third feature film, Mädchenbande , opened the Quinzaine des réalisateurs at the Cannes Film Festival in 2014 and won numerous international awards. Sciamma made her fourth feature film with Portrait of a Young Woman in Flames , for which she also wrote the screenplay. It celebrated its premiere in the competition at the 72nd Cannes Film Festival and earned her the European Film Prize for best screenplay.

In 2017 she was accepted into the Academy of Motion Picture Arts and Sciences (AMPAS) for her achievements as a screenwriter . a. the Oscars awards.