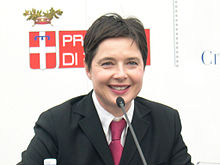 The 61st Berlin International Film Festival (Berlinale) took place from February 10 to 20, 2011. The main prize of the festival, the Golden Bear , was awarded to the Iranian contribution Jodaeiye Nader az Simin from Asghar Farhadi .

The Berlinale opened with the American Western True Grit by the Coen brothers , which was shown out of competition. The film is a remake of the 1969 John Wayne film The Marshal. 385 films from 58 countries were shown in 969 screenings within eleven days. 99 productions came from Germany or were made with German participation. The funding for the festival in 2011 is 19.5 million euros. 6.5 million euros of this come from federal funds. The sales quota for cinema tickets was 300,000, while 20,000 accreditations were issued to trade visitors.

The Italian-American actress Isabella Rossellini was selected as the president of the international jury . The Iranian director Jafar Panahi was invited to join the jury . After Panahi was sentenced in December 2010 by the Islamic Revolutionary Court in Tehran to a six-year prison term and a 20-year professional ban, Berlinale director Dieter Kosslick announced his support for Panahi. His films are shown in several sections of the film festival. In addition, the Berlinale Talent Campus and World Cinema Fund are planning a panel event with Iranian filmmakers on censorship and the restriction of artistic freedom in Iran.

The Honorary Golden Bear of the Berlinale 2011 was awarded to the 80-year-old German actor Armin Mueller-Stahl . The retrospective is reminiscent of the Swedish film director Ingmar Bergman .

Countries represented in the competition for the Golden Bear for the best feature film (including co-production countries); gold colored Iran

Rossellini was assisted by six jury members. It was all about filmmakers:

On December 15, 2010, the first competition films were announced. The program was completed on January 18, 2011. A total of 16 film productions from 20 countries were represented, four fewer than in the previous year . With the exception of Asghar Farhadi (Director Award 2009 for Everything About Elly ), Joshua Marston ( Alfred Bauer Award 2004 for Maria Full of Grace ), Rodrigo Moreno (Alfred Bauer Award 2006 for The Bodyguard ) and Jonathan Sagall ( entry in 1999) the other twelve filmmakers for the first time for the Golden Bear . JC Chandor , Ralph Fiennes , Paula Markovitch and Victoria Mahoney were represented with their feature film debut .

In addition to competition, the following films are shown in the competition program:

Berlinale program and cinema tickets for the 61st edition

The Panorama section took place for the 32nd time this year and was dedicated to international film (preferably art house cinema and auteur films). From the films, the cinema-goers could choose the most popular film on ballot papers, which was then awarded the Panorama Audience Award. This was won by También la lluvia (feature film) by Icíar Bollaín and In Heaven, Below Earth . The Jewish cemetery Weißensee (documentary film) by Britta Wauer.

The Perspective German Cinema section was held for the tenth time and showed current German documentary and feature film productions. It is considered a platform for young German directors and was also considered for the award of the prize for the best debut film in 2011 (together with the competition, the Panorama, the Forum and the Generation section).

* = Guest of the Perspektive Deutsches Kino

Awards from the independent juries