Official Berlinale poster for the 2006 competition

Festival director Dieter Kosslick announced the Berlinale 2006 as a festival that focuses on political film. According to Kosslick, the Berlinale 2006 is "as political, cruel and unpleasant as the world situation is". The competition then also featured films like Esma's Secret - Grbavica , which tells of the effects of the rape during the Balkan War and which ultimately won the festival, The Road to Guantanamo, about the effects of the war on terror, and Syriana, about the struggle for the ever scarcer evolving resources.

The following films were shown in the official competition this year :

Natalie Portman at the Berlinale 2006 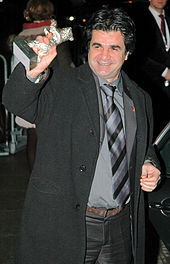 This year the actor Ian McKellen and the director Andrzej Wajda were awarded the Honorary Golden Bear for their life's work.

Under the title Mystery Classics , the section showed a total of nine films by Japanese genre director Nakagawa Nobuo from the 1950s and 1960s. The focus was on horror and crime films. Nakagawa Nobuo had previously been rediscovered at festivals in Venice and Paris, and the Japanese festival Tokyo FilmEX had shown a retrospective of 12 films last October. With the series, the forum also resumed the Midnight Screenings that had been suspended the year before; In previous years, old and new genre films were shown at a late hour in this program line.

The gay and lesbian film prize Teddy Award celebrated its 20th anniversary this year. On the occasion of the anniversary, a retrospective with the best films from 20 years was shown. The 2006 Teddy Award went to the Filipino children's film Maximo Oliveros Blossoms by Auraeus Solito .

The jury of the Berlinale 2006 refused to include the film " The Lives of Others " in the competition program. It was the feature film debut of Florian Henckel von Donnersmarck , who had also written the script for the film. In 2007 the film received the Oscar for best foreign language film and many other awards.