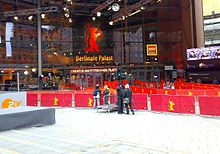 The Berlinale opened on February 5th with the film The International by Tom Tykwer . The film was seen in competition, but out of competition. 383 films were shown in 1238 screenings at the festival. There were around 20,000 accredited trade visitors at the festival. A total of around 270,000 tickets were sold. This means a new audience record. The Friedrichstadt-Palast and the Cinema Paris on Kurfürstendamm were added as new venues this year .

On December 12, 2008 the first competition films were announced.

The following films will be shown in the official competition:

In addition to competition, the following films can be seen within the competition program:

Award for the best first work

During the official award ceremony on February 14th, the prize for the best first work was given. An international jury consisting of Hannah Herzsprung (Germany), In-Ah Lee (Germany) and Rafi Pitts (Iran) selected the competition film Gigante by Adrián Biniez as the winner from among the debut films from all sections of the festival . The film Flickan ( The Girl ) by Fredrik Edfeldt received an honorable mention from the jury . This film was shown in the Generation Kplus section.

The films London River and My One and Only received honorable mention from the ecumenical jury .

The Panorama section celebrated its 30th anniversary this year. This was celebrated on February 10, 2009 in the Zoo-Palast with a gala screening of the film Milk in the presence of director Gus Van Sant . Another jubilee was the Panorama Audience Award . For ten years now, panorama viewers have been voting on their favorite film. On this occasion, the ten winners of the last ten years were shown again.

In the Generation Kplus section, the children's jury awarded the Transparent Bears for the best feature film to the Canadian entry C'est pas moi, je le jure! ( I swear it wasn't me! ) By Philippe Falardeau . The film Max Pinlig (Max Peinlich) by Lotte Svendsen received an honorable mention from the jury . The Transparent Bear for best short film went to the film Ulybka Buddy (Buddha's Smile) by Bair Dyshenov .

The youth jury in the Generation K14plus section awarded the Transparent Bears for the best feature film to the American entry My Suicide by David Lee Miller . The animation film Mary and Max by Adam Elliott received an honorable mention from the jury . The New Zealand film Aphrodite's Farm by Adam Strange received the transparent bear for best short film .

The Teddy Award for the best feature film this year went to the film Raging Sun, Raging Sky (Rabioso sol, rabioso cielo) by Julián Hernández . The best essay film was Fig Trees (Fig Trees) by John Greyson and the best short film A Horse Is Not a Metaphor by Barbara Hammer .

Already in mid-December 2008 it was announced that Maurice Jarre the Honorary Golden Bear is obtained. The Oscar-winning film composer received the award at a gala performance of Lawrence of Arabia on February 12th at Kino International .

The French director Claude Chabrol , who won the Golden Bear in 1959 for Schrei, if you can , and the German film and television producer Günter Rohrbach were honored with the " Berlinale Camera " on February 8 and 9, respectively . Another Berlinale camera was awarded to Manoel de Oliveira .

This year's retrospective dealt with films made in 70 mm format . In addition to the showing of films, there were accompanying panel and workshop discussions. In addition to American monumental productions such as Ben Hur , Cleopatra and musical productions such as Hello, Dolly and West Side Story , Soviet films such as Sergei Bondarchuk's War and Peace and Goya by Konrad Wolf were shown.