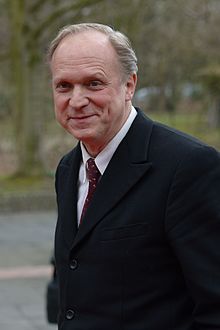 Ulrich Tukur at the Grimme Prize 2015

Ulrich Tukur (* 29 July 1957 in Viernheim as Ulrich Gerhard Scheurlen ) is a German actor and musician .

Ulrich Tukur, a descendant of Gustav Schwab , grew up in Westphalia , Hesse and Lower Saxony . His father worked as an engineer for various power generators. His mother was a teacher. His parents described Tukur as "very stuffy, middle-class, Swabian". He spent his youth in Wedemark near Hanover . He graduated from high school in Großburgwedel in 1977 and graduated from high school during a student exchange with the American Field Service in Boston (USA). It was there that he met his future first wife, Amber Wood. After thisHe studied German , English and history at the University of Tübingen and worked, among other things, as a street musician. In Tübingen, at the age of 21, he went to a theater for the first time voluntarily, to a performance of the Threepenny Opera . Eventually he was discovered for the stage and began training in acting in 1980 at the State University for Music and Performing Arts in Stuttgart . After completing his acting studies in 1983, he was hired by the Heidelberg City Theaters . During his studies in Tübingen he was a member of the student association AV Igel .

Tukur got his stage name at the request of Michael Verhoeven , the director of his first feature film, at the beginning of his career. He derived it from an incident passed down in the family during the occupation of the Rhineland by Napoleon at the beginning of the 19th century, when a French officer named a newborn baby "Napoleon, tout court" (for 'Napoleon, very simple') as Napoleon Tukur Germanized.

Ulrich Tukur is married to the photographer Katharina John for the second time. From 1999 to 2019 they lived in Venice on the island of Giudecca and in the Tuscan village of Montepiano (town of Vernio ). Tukur's first marriage is the result of daughters Lilli and Marlene, who are both studying in the USA. In 2019 Tukur moved to the Schöneberg district of Berlin .

While still a student, Michael Verhoeven made it possible for him to take part in a film for the first time: In 1982, he played the students and members of the resistance group against the Nazi dictatorship Willi Graf in The White Rose . During a later engagement in Munich in Ferdinand Bruckner's Illness of Youth , Peter Zadek became aware of him, which resulted in a fruitful artistic collaboration that finally led to Tukur's breakthrough at the theater in 1984.

Tukur first played under Zadek at the Freie Volksbühne Berlin as SS officer Kittel in Joshua Sobol's play Ghetto . Later, the Deutsches Schauspielhaus in Hamburg became their artistic home for both of them - for Zadek as artistic director and for Tukur from 1985 to 1995 as a member of the ensemble in numerous leading and supporting roles. In particular, he was able to convince under Zadek in Shakespeare's As You Like It , as Marc Anton in Shakespeare's Julius Caesar , in Zadek's production of Lulu by Frank Wedekind as Alwa Schön and as Hamlet in the production by Michael Bogdanov . In 1986 he was named actor of the year by German theater critics. From 1995 to 2003 he was director of the Hamburger Kammerspiele together with Ulrich Waller , which he opened with the role of Beckmann in Wolfgang Borchert's Outside Front Door . From 1999 to 2001 he played the title role of Jedermann by Hugo von Hofmannsthal at the Salzburg Festival .

Ulrich Tukur & the Rhythm Boys in a guest performance at the Deutsches Schauspielhaus , Hamburg , early 1990s

In 1995 he founded the Ulrich Tukur dance band and the Rhythm Boys , with whom he has played many tours and released various recordings. It operates under the name of the oldest boy band in the world and plays its own compositions and evergreens, with Tukur as singer, pianist and accordion player. The Rhythm Boys are Kalle Mews (drums, animal sounds), Ulrich Mayer (guitar, vocals) and Günter Märtens (double bass, guitar, vocals). "Ulrich Tukur & Die Rhythmus Boys" started a tour as musical ambassadors for Germany in Budapest, Belgrade and Ljubljana on April 24th, 2017.

In 2006, Tukur played the role of Lieutenant Colonel of the GDR - State Security Anton Grubitz in the Oscar- winning film The Lives of Others . In August 2009 it was announced that Tukur would take on a role as crime scene investigator Felix Murot for Hessischer Rundfunk . The first episode was broadcast on November 28, 2010, for the 40th anniversary of the Tatort .

In 2014 he took over the patronage of the German Television Crime Prize .

In October 2019 he published his first novel The Origin of the World .

Directors of the Hamburger Kammerspiele