Kathy Bates grew up in Memphis as the youngest of three children of engineer Langdon Doyle Bates and Bertye Kathleen Bates. Her great-great-grandfather was an emigrant from Ireland and a doctor for US President Andrew Jackson . She graduated from Southern Methodist University in 1969 with a degree in theater studies . After graduation, she moved to New York City to advance her acting career.

She started her career on Broadway , starring in Lanford Wilson's Fifth of July and in Come Back to the Five and Dime, Jimmy Dean, Jimmy Dean (directed by Robert Altman ) with Karen Black and Cher . In 1983 she received a Tony Award nomination for her role in Night, Mother . This multiple award-winning production was performed for over a year.

Her first film role was in the comedy Taking Off by the Czech director Miloš Forman ; Bates also contributed (in the cast as 'Bobo Bates') the self-composed song Even Horses Had Wings . In 1978 she played alongside Dustin Hoffman in Straight Time , both played again in 1990 in Warren Beatty's Dick Tracy . This was followed by roles in smaller films and guest roles in TV productions such as LA Law , before she got the lead role in the film Misery in 1990 . For this role, she received both an Oscar and a Golden Globe .

In 1991 she starred alongside Mary Stuart Masterson and Jessica Tandy in Green Tomatoes . She also took on a leading role in 1995 in the film Dolores , for which she received, among other things, a nomination for the Saturn Award . In 1997 she took on the role of Margaret 'Molly' Brown in James Cameron's Titanic . In 1998 she starred alongside John Travolta and Emma Thompson in the drama With all Power , for the role of political advisor Libby Holden, she received, among other things, an Oscar and a Golden Globe nomination for best supporting role. In 2002 she was nominated for both awards for the film About Schmidt . In 2006 she and Terry Bradshaw played the parents of Matthew McConaughey's character in the film Seduced To Undress . Between 2011 and 2012 she starred in the NBC series Harry's Law . From 2013 to 2016 she was also a member of the American Horror Story series . After skipping in 2017, she will return for Season 8 in 2018. In 2016 she received a star on the Hollywood Walk of Fame for her life's work .

In addition to acting, Kathy Bates also works as a director . She has directed several episodes of the television series Everwood and Six Feet Under , in which she also had guest appearances. Her permanent German dubbing voice is Regina Lemnitz . 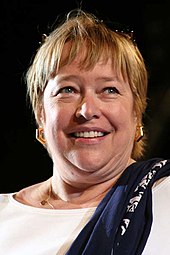