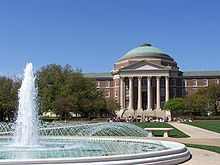 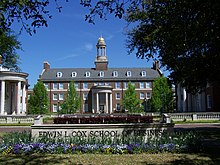 The Southern Methodist University (also SMU called) is a private university in University Park ( Dallas County ) in the state of Texas . Founded in 1911, 10,901 students are currently enrolled at the university. The SMU is part of the United Methodist Church , but only about 25% of them are members of that church. The university is particularly known for its research and teaching in the fields of law and economics.

The SMU's Meadows Museum houses one of the largest and highest quality collections of Spanish painting outside of Spain.

The SMU sports teams are known as the Mustangs and are members of the American Athletic Conference . In the field of college football , the college was responsible for the Ponygate scandal in the mid-1980s , which was one of the greatest scandals in American sports history.