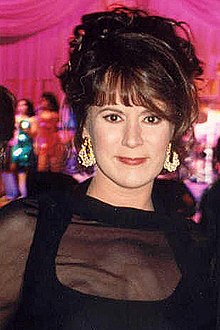 Patricia was born Patricia Castle Richardson at Bethesda Maryland Hospital and has three sisters - Ann, Lynn and Cathy. Her family was forced to move frequently when she was young, as her father Lawrence was employed as a test pilot in the US Navy . Patricia attended two high schools - the Holton Arms School in Bethesda and the High Aday School for Girls in Dallas , Texas . She began acting while in high school, and later earned a BFA in acting from Southern Methodist University . At the same university she also attended a course in fine arts, drama.

Her acting career began in 1980 with the film You better watch out , in which she played the role of Moss' mother. In the following years she was mainly active in television. In 1991 she had her breakthrough with a leading role in the sitcom Listen, Who Is Hammering (Tool time) . There she played the role of Jill Taylor , the wife of Tim Taylor, played by Tim Allen . For her role, Frances Fisher was initially intended, but left the series after the pilot .

Breakthrough and other roles

Richardson became internationally known through listen who's hammering . The series was in production for eight years until it was finally discontinued in 1999. Although she was offered $ 25 million for another season, she turned it down because she felt there were no more stories to tell on the show.

She played the female villain in an episode of Law & Order: Special Victims Unit and in a TV miniseries titled Blonde Gladys Baker, the mother of Marilyn Monroe . She then played a double role in the independent film Viva Las Nowhere , which was only released on DVD with the title Dead Simple . From 2002 to 2004 she was in the doctor series Strong Medicine: Two doctors like fire and ice as Dr. See Andy Campbell. She later played the role of a campaign manager on The West Wing .

In 1994 she moderated the 46th Emmy Awards together with Ellen DeGeneres .