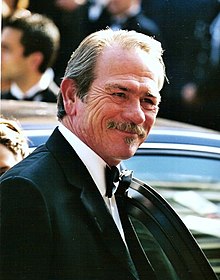 Jones was born in 1946 in San Saba, Texas, to oil worker Clyde Jones and police officer Lucille Marie (née Scott) . Jones had an Indian grandmother ( Cherokee ) and worked as a teenager with his father in the oil fields. His father left the family to work in the Libyan oil fields . Jones made it through football scholarships to the elite St. Mark's School of Texas in Dallas , a boys' college that prepares for college, and then went to Harvard University , where he studied English and graduated cum laude in 1969. At Harvard, he also successfully played American football (1966–1968) and had the option of joining the Dallas Cowboys as a professional player . Jones has been friends with his roommate at the time, the Democrat Al Gore , since he was a student and supported his presidential campaign in August 2000 .

Jones' first wife was Katherine (Kate) Lardner, granddaughter of Ring Lardner , with whom he was married for seven years. In 1981 he married the photographer Kimberlea Gayle Cloughley, the daughter of Phil Hardberger , from whom he divorced in 1996. He has two children with her. He has been married to camera assistant Dawn Maria Laurel since March 2001 . Jones is active in various charitable projects and lives far from Hollywood in San Antonio , Texas. In the surrounding area, he managed two ranches where cattle and polo - Ponies are bred.

Jones got his first acting experience at school. During his studies he participated in Shakespeare performances, among other things . After graduating from Harvard, he went to New York in 1969 , where he played for theater and television for a few years. His debut on Broadway he was with A Patriot for Me (1969) by John Osborne. Jones had his first small film role in Love Story (1970), written by his Harvard roommate Erich Segal . Jones played the roommate of the main actor Ryan O'Neal and commented on his love life in two scenes. In 1975, Jones moved to Los Angeles and played a supporting role in the Charlie's Angels series pilot . His first leading role was the escaping prison inmate in Rape Behind Bars .

In 1983 Jones got an Emmy for his portrayal of a murderer on death row The Executioner's Song , which increased his notoriety and established himself as a Hollywood actor. Jones was best known as an actor in action films . He is one of the few actors who got a stand-alone sequel , although he only had a supporting role in the first film: In On the Hunt , he returns to the Oscar-winning role of Deputy US Marshal Sam Gerard from On the Run . His fee for Hollywood productions intended to peak at 20 million US dollars have been lying ( Men in Black II ) .

Jones made his directorial debut in 1995 with the television film Once a Cowboy, Always a Cowboy ( The Good Old Boys ) based on a model by Elmer Kelton, in which he also played the lead role. The production received nominations and a. for the Cable Ace Award and the Actor's Guild Award. 2005 he directed Three Burials - The Three Burials of Melquiades Estrada ( The Three Burials of Melquiades Estrada ), a contemporary Western in which he also played a major role for the second time directing. This production was his first feature film that he directed. Jones co-produced the film with Luc Besson , Michael Fitzgerald and Chris Menges and was awarded the Actor Award for the role of Pete Perkins at the Cannes Film Festival . In 2011, The Sunset Limited - A Question of Faith followed , another television film that Jones directed. His fourth directorial work The Homesman was released in 2014.