This article describes the actor John Goodman . For the art director and production designer of the same name, see John B. Goodman .

After high school, John Goodman attended Missouri State University and took acting classes . He also worked as a doorman. In 1985 he made his Broadway debut in New York City with the play Big River .

Goodman made his first television appearance in a commercial for the fast food chain Burger King and Sesame Street . This was followed by major roles in the films The Big Easy and Arizona Junior , for which he first worked with Ethan and Joel Coen , who found a kindred spirit in him. In 1988 he made his breakthrough as the family man Dan Conner in the sitcom Roseanne . For this role he received the Golden Globe in 1993 for best actor in a comedy series. One year after the series began, he made his first appearance on the legendary comedy show Saturday Night Live , where he met Annabeth Hartzog , with whom he still lives and has a daughter.

Goodman's greatest box office successes include the films Flintstones - Die Familie Feuerstein , King Ralph , Coyote Ugly , Endstation Sehnsucht , Good Vibrations - Sex vom Another Stern as well as the works of the Coen brothers, with whom he worked six times ( Arizona Junior , Barton Fink , Hudsucker , The Big Lebowski , O Brother, Where Art Thou? And Inside Llewyn Davis ). In Blues Brothers 2000 , the sequel to Blues Brothers , he took on a role in 1998 on the side of Dan Aykroyd . In 2000 he got his own sitcom called Normal, Ohio , but it was canceled after the first season. His next sitcom, Center of the Universe (2004), also flopped and was quickly canceled. 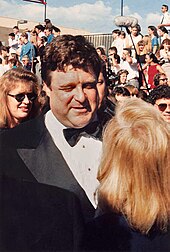 Goodman at the 1994 Emmy Awards

In the theater, he played the role of the Christmas Present Spirit in A Christmas Carol . From 2007 Goodman took over (as in A Kingdom for a Lama and its sequel, A Kingdom for a Lama 2 - Kronk's Great Adventure ) the voice actor role of Patcha in Kuzco's premier class . In the first season this role was still spoken by Fred Tatasciore. In 2009 he took on a speaking role again, namely "Big Daddy" La Bouff in Disney's Kiss the Frog .

Goodman, as he later admitted, had been a heavy alcoholic since the 1980s . He got drunk every evening and was under the influence of alcohol most of his film appearances. During theater performances he often hid glasses with vodka in the sets because otherwise the tremor would have prevented him from continuing to play. During a stay in Germany in 2006, he stopped drinking and has been attending Alcoholics Anonymous meetings since then .