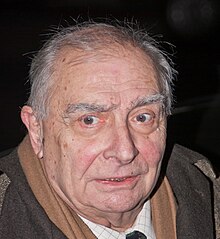 Claude Henri Jean Chabrol [ kloːd ʃaˈbʀɔl ] (born June 24, 1930 in Paris ; † September 12, 2010 ibid) was a French film director , screenwriter , film producer and actor . He was one of the important directors of the Nouvelle Vague and known for his socially critical films about the French bourgeoisie . Influenced by Alfred Hitchcock , he portrayed the cryptic and ambiguous in many of his films in an ironic and detached way.

Claude Chabrol came from a long-established family of pharmacists. He grew up with his grandparents in the central French village of Sardent ( Département Creuse , Limousin region ). At the age of thirteen he founded a film club in a village barn. After the end of the Second World War he returned to Paris, attended high school and studied literature at the Sorbonne . After passing the state examination, he was briefly enrolled in law and pharmacy . At the same time , he regularly attended the Cinémathèque française and the cineastes circle in the Parisian "Café de la Comédie", which was founded by André Bazin . Together with Éric Rohmer , he wrote a monograph on his film role model Alfred Hitchcock in 1956 , the world's first Hitchcock monograph. In the late 1950s he became a film critic for the Cahiers du cinéma . Chabrol eventually dropped out and initially worked in the press department of 20th Century Fox in Paris.

Although his parents prevented him from attending the Paris Film School ( IDHEC ) and he was never able to gain experience as an assistant director , he presented his first directorial work, Die Enttäuschten , at the Locarno Film Festival in 1958 . The location was the village of his childhood and youth. With an inheritance and the proceeds from his second film, Scream, If You Can (1958), he was able to set up his own production company AJYM (the name is an acronym formed from the initials of the first names of his first wife and both sons). She also produced the first works by Éric Rohmer, Philippe de Broca and Jacques Rivette .

His first wife, Agnès Goute, “came from a wealthy family, and we basically did nothing other than throw decadent parties. When she inherited her grandmother, we didn't even know what to do with the money. ”In 1957, Chabrol decided to do a film work“ to spend at least part of the money ”. He regretted the unexpected success of the film, because it meant that he was “forced” to continue filming. This marriage (1952–1964) was the result of the sons Jean-Yves (* 1954, architect) and Matthieu Chabrol (* 1956), who, as a musician and composer, composed the music for some of his father's films. In his second marriage (1964–1980) Chabrol was married to the actress Stéphane Audran ; their son, the actor Thomas Chabrol , also appeared in his father's films, such as Betty . In 1983 he married Aurore Pajot, who used to work as a "script girl" or script supervisor and who often accompanied her husband on filming . Chabrol was an avowed Maoist and known as a gourmet and workaholic . In 1989 he was voted " Pipe Smoker of the Year ". Chabrol described himself as a feminist, among other things he made this clear by the appreciation of his wives: “With every marriage there was a surprise. My first wife had a lot of money that I didn't know before. The second suddenly turned out to be a gifted actress. And the third turned out to be the most wonderful wife, who also cooks wonderfully, and that is the greatest happiness of my life. "

In order to keep his film team, which he also regarded as his extended family, in a good mood, he always went to filming locations where a good restaurant could also be reached.

He shared an intensive working relationship with the composer Pierre Jansen , who composed the music for 30 of his films, and the character actress Isabelle Huppert , who appeared in seven of his best films: “Chabrol knows me better than anyone. We don't need miles of conversation. We understand each other even without words. "

Chabrol has filmed works by Henry James , Cornell Woolrich, Flaubert , Henry Miller , Patricia Highsmith , Ellery Queen and Simenon , as well as Fantomas . The French bourgeoisie was his favorite domain: Using filmic means he dissected the relationship of the bourgeoisie to money and power, depicting their intrigues , their decadence and their lust. Even more so, the middle-class middle class, which works on the externally determined or self-imposed desires and demands, on the desired self-image, until self-confidence crumbles and is punished with obsessions and pathologies.

Gravestone in the Pere Lachaise cemetery

Chabrol was popular with colleagues for his “witty” and “contagious joke”, with which he “relaxed” ideological-aesthetic debates at the Cinémathèque française , as Volker Schlöndorff observed. For Hanns Zischler he was “a very warm person and very entertaining. He was able to spread an extraordinarily good mood. ”He also doesn't know anyone who has seen so many films and was able to speak enthusiastically about so many films as Chabrol.

In 2000, Chabrol was a member of the jury at the Venice International Film Festival . A great admirer of Chabrol's film art was the German filmmaker Rainer Werner Fassbinder , who analyzed Chabrol's films in 1975 in an essay , but also criticized them. Occasionally, Chabrol appeared as an actor in films by colleagues.

Claude Chabrol was buried in the Père-Lachaise cemetery in Paris.

Scripts for films by other directors

Performances as a performer 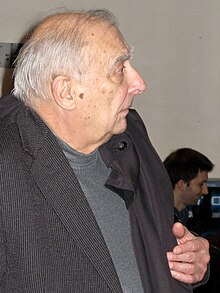