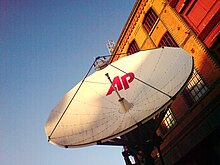 Associated Press ( AP ) is a news and press agency headquartered in New York City that was founded in May 1848 (as the "Harbor News Association"). The company had 263 offices in 106 countries in 2016. It is considered to be the largest news agency in the world.

By merging several regional press agencies in 1892, the Associated Press significantly expanded its information advantage. The first Germany correspondent ( Wolf von Schierbrand ) started work in 1898. In 1900 the until then informal association was brought into the legal form of a cooperative . Today it has well over 1,400 members. The number of customers is put at around 12,000 worldwide.

AP was probably the first news agency to deliver content to private customers via an online service . This happened from 1980 with the online provider CompuServe .

According to recent records, the origins of AP go back to May 1846, when Moses Yale Beach , the publisher of the New York Sun , suggested competing newspapers to collect news about the war between the United States and Mexico . Moses Sperry Beach, the son of Moses Yale Beach, describes in a memorandum dated June 1872 that reports of the Mexican War were brought by boat to Mobile , Alabama , and from there by horse to Montgomery , Alabama, according to the 1846 agreement . From there, the reports ran with coaches of the US mail to Richmond in Virginia , which would become the southernmost point of the telegraph line to New York City was located. This complex express transport meant a time advantage of 24 hours. The agreement was initially joined by the Journal of Commerce , the Courier and Enquirer , the Herald and the Express . During World War II , the Associated Press exchanged photos with the German National Socialist regime.

When the so-called editor's law of the NS state came into force in 1934, only Germans of "Aryan" descent were allowed to work in the editorial offices and picture services. The regulation also applied to international agencies that had branches in the Reich. These included the British-American company Keystone and Wide World Photos, the picture service of the New York Times. In 1935 the Propaganda Ministry pilloried these agencies because they continued to employ Jews. Then all agencies gave up the location. Only the AP remained. By remaining in Germany, AP received an internationally unique market position. The agency was brought into line and fired German (Jewish) employees. The Propaganda Ministry now had the right to censor the agency archives. It controlled the use of the photo reporter on certain occasions. In addition, the agencies had to submit their pictures to the ministry for censorship. From 1942 there was a Germany office successor to the AP as the German office Laux, whose former AP employees now joined the SS. The cooperation with the US headquarters remained constant.

AP operates APTN ( Associated Press Television News ) - which it claims is the world's largest video news agency. The material is distributed to TV stations and other users (Internet) worldwide via its own (encrypted) satellite channels. APTN delivers current images from politics, sport and entertainment according to a set program in so-called feeds, as well as some live images from war zones (e.g. extra channel from Baghdad during the 2003 Iraq war ). In Germany, APTN has sales offices in Berlin and Frankfurt.

The German headquarters of the AP were in Frankfurt am Main until the end of 2009 . In December 2009, the German AP service was taken over by the owners of the ddp news agency , Peter Löw and Martin Vorderwülbecke, and renamed "DAPD - German Foreign Dispatch Service". The two houses ddp and DAPD remained, but they evaluate each other's reports. They were given a joint managing director and editor-in-chief; there was also still a separate editor-in-chief for DAPD and ddp. DAPD moved to Berlin.

Initially, DAPD messages were marked with (APD) after the placemark instead of the previous (AP). However, since it turned out that the rights to this abbreviation belong to the "Adventist Press Service", the information service of the Evangelical Free Church of Seventh-day Adventists in Germany, the agency changed the abbreviation to (apn). As before, DAPD's international service was prepared using material from the global AP network of correspondents. Conversely, AP evaluated the ddp for their reports from Germany. The Swiss service of the DAPD was closed on February 1, 2010; only one correspondent's office remains in Switzerland.

Distribution of AP services by dpa

Since 2013, the German Press Agency has had the right to sell AP services in Germany on the basis of a long-term cooperation agreement. Among other things, the AP Weltnachrichten are broadcast in German. Reports on international topics are distributed around the clock; the service sees itself as a supplement to the international reporting in the dpa basic service. According to its own information, the AP Weltnachrichten have a volume of approx. 80 reports per day.

Pressure on AP and media manipulation by the Pentagon

On the occasion of an honorable mention ( national citation ) of journalistic excellence for AP CEO Tom Curley of the William Allen White Foundation on February 6, 2009 at the University of Kansas , Curley criticized the increasing pressure of the US military on independent reporters in war zones and one increasing media influence by the US Department of Defense.

Since the Iraq war in 2003, eleven AP journalists have been arrested for more than 24 hours and in 2008 alone the US military had arrested eight journalists worldwide for more than 48 hours. If the arrested journalists were willing to trash their colleagues ( to trash other people ), they would be released immediately. Otherwise, they would be held for two to three weeks and subjected to further questioning. Leading commanders had given him to understand that he and the AP would be destroyed ( ruined ) if he and the AP news agency continued to insist on their journalistic principles. He did, however, did not understand these remarks as a threat, but as an "expression of anger" ( in expression of anger ), Curley said later in an interview. After the Iraq war, the US military expanded the rules for war reporters from one to four pages and now (2009) they are so vague that a journalist can be sent away on the spot if a commander does not like the reports.

In addition, a year-long research of over 100,000 pages of government documents and a survey of 100 people by AP officials revealed that the United States Department of Defense has increased its budget for propaganda operations by 63 percent since 2003, which amounted to $ 4.7 billion in 2008 and employed 27,000 people. Most of the information about it is secret, even information that was previously made public. Instead of assisting journalists with their inquiries, the Ministry of Defense's press office would rather collect intelligence material about the inquiring journalists. According to AP information, a public relations department called the Joint Hometown News Service is at a former Air Force base in San Antonio , Texas. There they produce verbal or picture reports that are leaked to the media with incorrect sources. For 2009, the publication of 5,400 press releases, 3,000 television spots and 1,600 radio interviews is planned. In view of the change of government in the USA (from George W. Bush to Barack Obama ), Curley called for a new transparency in the rules between the military and the media.

In April 2013, AP stated that it had been officially informed that the Ministry of Justice had secretly obtained the connection data of more than 20 lines from the news agency and its journalists over a period of two months in early 2012. As a result, a letter from AP President Gary Pruitt to Attorney General Eric Holder was published on the Internet, with which AP complained that the government could obtain detailed insights into the work of the news agency with the data obtained from the call logs, without any authorization to be. This included information about confidential communications with sources: “ We consider this Justice Department act as a serious interference with AP's constitutional right to gather and report. “ CNN quoted a statement from the Justice Department saying that it respects the freedom of the press, but that investigations must strike the right balance between the free flow of information and the fair and effective application of criminal law.

Since 2015, AP has been publishing historical film recordings on YouTube together with the British Movietone newsreel archive . There are 550,000 digitized recordings from 1895 to the present.