Isabelle Anne Huppert (born March 16, 1953 in Paris ) is a French theater and film actress who has received numerous awards over the course of her career.

Isabelle Huppert was born in 1953 in Paris as the daughter of the safety engineer Raymond Huppert and the English teacher Annick Huppert. With Caroline (director), Jacqueline and Elisabeth (actress), she has three sisters and her brother Rémi.

She has been married to the Lebanese producer and director Ronald Chammah (* 1951) since 1982. The couple have three children: their daughter Lolita Chammah (* 1983) is also an actress and played their film daughter in Copacabana (2010). Their youngest son was born in 1998. Isabelle Huppert lives in Paris. 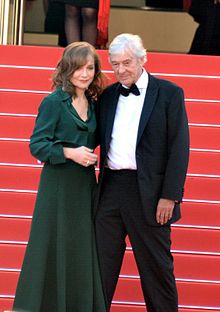 Huppert with Paul Verhoeven in Cannes 2016

In 1971 Isabelle Huppert made her film debut in Faustine et le bel été , directed by Nina Companéez . The early highlights of her film career include The Clever , The Judge and the Murderer, and The Lace Maker . Later films cemented her reputation for portraying profound characters whose fragile appearance contrasts with her willpower. B. The Lady of the Camellias (1981). She often shot with the director Claude Chabrol , with whom she had a deep artistic understanding. She also worked several times with the Austrian director Michael Haneke . In his film The Piano Player (2001) she played the role of Erika Kohut, for which she was awarded the Best Actress Award at the Cannes Film Festival.

In 1980 she accepted an offer from Hollywood ; Michael Cimino's late-western Heaven's Gate , however, turned out to be one of the biggest flops in film history. American films remained the exception in Huppert's filmography. She turned in 1987 yet the bedroom window , 1994 Amateur of Hal Hartley and 2004 I Heart Huckabees .

In May 2009, Huppert took over the office of jury president at the 62nd Cannes International Film Festival . The main prize of the Golden Palm was awarded this year to the contribution The White Ribbon by Michael Haneke. At the 1984 film festival , she was a member of the competition jury in Cannes under the direction of British actor Dirk Bogarde, alongside Michel Deville and Stanley Donen . 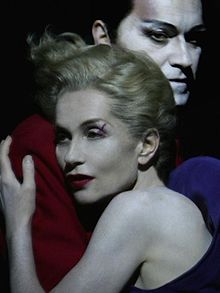 Huppert at a quartet performance at the Odéon - Théâtre de l'Europe

At the age of fourteen, Huppert took acting lessons at the Conservatoire de Versailles , which was followed by courses with Jean-Laurent Cochet . It was the beginning of a theater career. In parallel to her film work, Huppert also appeared again and again successfully as a theater actress. On French and European stages she took on leading roles in French-language performances both in classical plays such as Shakespeare's comedy Maß für Maß (Paris, 1991) and Schiller's Maria Stuart (London, 1996) as well as in contemporary works such as Sarah Kane's 4.48 Psychosis (Paris, 2002; Berlin, 2005), Heiner Müller's Quartet (Paris and Berlin, 2006), Yasmina Reza's Der Gott des Gemetzels (2008) or Krzysztof Warlikowski's Un Tramway (Paris and Berlin, 2010).

For the title roles in Un mois à la campagne , Virginia Woolf's Orlando , Euripides ' Medea and Ibsens Hedda Gabler , she was nominated five times for the Molière in the category Best Actress , but has not yet won the most important French theater award. In 2017 she was awarded the European Theater Prize. After Orlando (1993), Isabelle Huppert appeared for the second time in a monologue staged by Robert Wilson in 2019 : as Maria Stuart in Darryl Pinckney's Mary Said What She Said . After its premiere on May 22, 2019 in the Espace Cardin of the Parisian Théâtre de la Ville, the piece appeared on several European stages, including the Wiener Festwochen and the Hamburg Thalia Theater .

As a singer, Huppert was responsible for the song cycle Madame Deshoulières (2001) together with Jean-Louis Murat , and a year later she also took on a vocal part in the film 8 Women (2002).

Huppert also works as a curator, for example for a Robert Mapplethorpe exhibition in Salzburg or the photo fair Paris Photo 2014.

Isabelle Huppert has won numerous awards, including the César for best actress in 1996 for her role as Jeanne in the film Beasts by Claude Chabrol . In addition, she was nominated 13 more times, more often than any other actress for the César. She was twice named best actress at the Cannes International Film Festival , in 1978 for Chabrol's Violette Nozière and in 2001 for The Piano Player , based on the novel by Elfriede Jelinek . In 2002 she and her seven partners received a Silver Bear at the Berlinale for the crime comedy 8 Women . In November 2011 the actress received the “Die Europa” actor's prize endowed with 10,000 euros at the Braunschweig International Film Festival . She was awarded the Honorary Golden Bear at the Berlinale for 2022 . 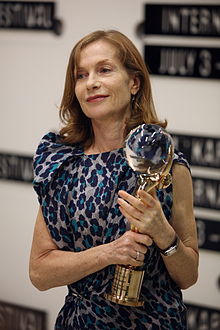 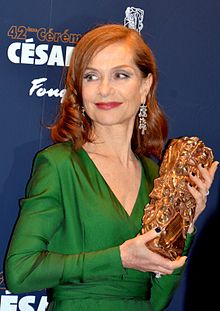 Huppert at the César Awards 2017