Valeria Golino , with the 2015 Coppa Volpi for Best Actress for Per amor vostro

The Coppa Volpi (German: "Volpi-Pokal") is a prize that is awarded at the annual Venice Film Festival . The award is given in recognition of the best acting performance by an actor and an actress in a competition film and was first presented at the third edition of the film festival in 1935. Previously, in 1932 and 1934, there were untitled actor awards to Fredric March ( Dr. Jekyll and Mr. Hide ) and Helen Hayes ( The Sin of Madelon Claudet ) or Wallace Beery ( Scream of the Haunted ) and Katharine Hepburn (Four Sisters ).

The Coppa Volpi is named after Giuseppe Volpi (1877–1947), an Italian businessman and politician who was president of the Venice Biennale and co-founder of the Venice Film Festival. As a trophy, the winners receive a gold-plated trophy that is adorned with the coat of arms of the city of Venice .

Up until 2019, the most frequently awarded actors and actresses were American actors and actresses (34 victories, including awards for supporting actors and actors), followed by their colleagues from France (26), Italy (22) and Great Britain (18). The French Jean Gabin (1951 and 1954) and Isabelle Huppert (1988 and 1995), the Japanese Toshirō Mifune (1961 and 1965), the Americans Shirley MacLaine (1960 and 1988) and Sean Penn (1998 ) each received the Coppa Volpi twice and 2003), the Spaniard Javier Bardem (2000 and 2004) and the Italian Valeria Golino (1986 and 2015). The jury's decision in 1997, when Victoire Thivisol's victory as best actress was announced, was controversial . The French woman was four years old when Jacques Doillon's drama Ponette was set , which sparked a discussion about the use of child actors in the film. To this day, Thivisol is the youngest winner of the Coppa Volpi.

Artists from German-language film were successful for the first time in 1935 and 1937, respectively, when the Austrian Paula Wessely ( episode ) and the German Emil Jannings ( The Ruler ) prevailed against the competition. Katja Riemann and Michael Fassbender were the last German winners to enter the list of winners, which were awarded for Rosenstrasse and Shame in 2003 and 2011, respectively .

By 2019, actors from the United States had received awards 22 times, followed by their colleagues from France, Great Britain and Italy (9 wins each).

* = Best performer of the festival was not awarded the Coppa Volpi 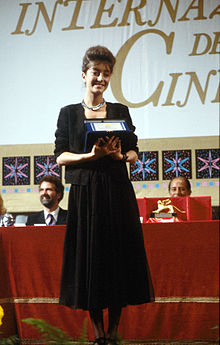 By 2019, actresses from France had received 17 awards, followed by their colleagues from the United States (10 wins), Italy (9 wins) and Great Britain (8).

¹ = 1952, the real winner was Ingrid Bergman disqualified because her voice in the Italian film in competition Europe '51 dubbed was.
² = Best actress of the festival was not awarded the Coppa Volpi