from Wikipedia, the free encyclopedia
This is the spotted version , flagged on July 17, 2020 . There are 3 pending changes that have yet to be viewed. 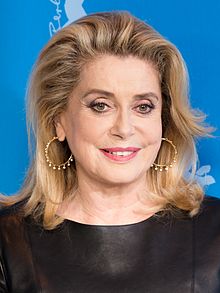 Catherine Deneuve at the Berlinale 2017

Catherine Fabienne Deneuve , b. Dorléac [ katʁin dənœv ] (born October 22, 1943 in Paris ) is a multi-award-winning French film actress . She has received numerous awards for portraying mysterious reserved beauties in films by eminent directors such as Roman Polański , Luis Buñuel and François Truffaut . Since her film debut in 1957, Deneuve has appeared in over 130 films, mainly in the cinema.

Catherine Deneuve comes from a family of actors. Her mother Renée Deneuve (* 1911) is a stage actress and her father Maurice Dorléac (1901–1979) was a film actor and director of the Paramount dubbing studio . Her older sister, the actress Françoise Dorléac , who brought Catherine into the film business, was killed in a car accident in 1967. Deneuve said it took a long time to come to terms with the death of her beloved sister. Other sisters are Sylvie Dorléac and her half-sister Danielle, whose father was Aimé Clariond. Catherine is the third of the family's four sisters. Her natural hair color is brunette; but since she has been coloring her hair since the 1960s, she is known as a blonde . In 1963, Roger Vadim gave her son Christian Vadim . Marcello Mastroianni is the father of their daughter Chiara Mastroianni, who was born in 1972 . Both children are also actors. From 1965 to 1972 Deneuve was married to the British fashion photographer David Bailey . Today she says about marriage: “Why marry if there is a possibility of divorce?” Deneuve holds back on providing information about her private life, but she says of her childhood that she “grew up very sheltered”.

Deneuve, who did not take acting lessons, worked in the film business from an early age. She had her first role at the age of 13, at that time still under the name Catherine Dorléac, in Les Collègiennes in 1957 . Her sister Françoise had asked her to play during the summer holidays. In 1960 she played again with Françoise Dorléac in The Little Sinner . 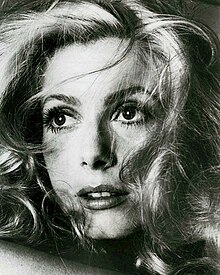 She achieved her breakthrough at the age of 21 in the musical film The Regenschirme von Cherbourg (1964), directed by Jacques Demy . The director Benoît Jacquot considers this film to be of decisive importance for her type and appearance in her later films, Demy's film is "the heart of her art". Her next success was Roman Polański's Disgust , in which she plays a young woman who becomes a murderess in a maddened state. In 1967 she played the lead role again in a Demy film, in The Girls of Rochefort - at the side of her sister Françoise and the then 50-year-old Danielle Darrieux , with whom she also appeared in 8 women 35 years later . She starred in Belle de Jour in 1967, directed by Luis Buñuel . The film became an international success and is considered one of Buñuel's best-known works. 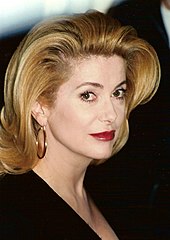 In 1969 Deneuve played alongside Jean-Paul Belmondo in The Secret of the False Bride . The internationally successful film was directed by François Truffaut . Deneuve played a marriage fraud here. The last Metro was the next internationally successful Truffaut film in 1980, in which Deneuve was seen as the director of a Parisian theater who hid her Jewish husband in the basement of the theater. Your film partners this time were Gérard Depardieu and Heinz Bennent . In 1970 Deneuve starred in the Buñuel film Tristana, which was also praised by critics and audiences . In the late 1970s she was to take part in The Short Night , Alfred Hitchcock's last unfinished film project .

Alongside Susan Sarandon and David Bowie , she played 1983 in desire , the bisexual vampire Miriam Blaylock. According to their own admission, the two actresses became close friends through the film to this day. In 1993 she was nominated for an Oscar for her role as the rubber plantation owner Elaine in Indochine . Régis Wargnier directed and wrote the role of Elaine for her with other screenwriters. Together with Björk , she played a factory worker in the Lars von Trier film Dancer in the Dark in 2000 . According to his own statements, Deneuve wants to have asked von Trier by letter - contrary to their custom - for a role in one of his films after she had made a lasting impression on him with Breaking the Waves . The next success was 8 women , in which director François Ozon brought together many of the most famous French actresses.

To date, Catherine Deneuve has starred in over 100 feature films, including more than 90 feature films. She was almost always seen in one of the leading roles. In 1988 she was also the producer of the film Drôle d'endroit pour une rencontre , in which she starred with Gérard Depardieu. Princesse Marie by Benoît Jacquot (via Marie Bonaparte ), Life is Strange and André Téchiné's Changing Times , a Balzac film adaptation in which, among others, Depardieu, who became one of her favorite colleagues, came from the last few years .

With her role of a lesbian vampire in lust , Deneuve caught the attention of the lesbian audience. Deneuve also played sexually ambiguous roles in several other films: in Zig Zig in 1975 she played a prostitute who kisses her friend. In Ecoute voir she portrayed a private detective in a trench coat, partly Emma Peel , partly Humphrey Bogart, including the attractive secretary. In Thieves of the Night , she played a professor who is having an affair with a student. In 8 women there is a kiss between her and Fanny Ardant , which is supposed to allude to Deneuve's previous roles and her associated image.

Catherine Deneuve also used her voice successfully, although she had not taken any singing lessons. She read several audio books for the Édition des femmes and interpreted various chansons. She sang duets with other stars such as Bernadette Lafont (1975), Gérard Depardieu (1980), Malcolm McLaren (1993), Joe Cocker (1995) and Alain Souchon (1997). In 1981 she recorded a full album of Serge Gainsbourg chansons .

Deneuve has worked as a journalist for Liberation , Madame Figaro, France 5 and other media. In 2005 her diary “A l'ombre de moi-même” (German book title: “In my shadow”; better translation would be: “In the shadow of myself” or “In my own shadow”), in which she spoke of the Shooting of " Dancer in the Dark " and " Indochine " told.

Catherine Deneuve has been committed to social and political issues since the 1970s. In 1971 she campaigned to legalize abortion in France. She signed the Manifesto of 343 ("le manifeste des 343"), a commitment to abortion written by Simone de Beauvoir and published on April 5, 1971 in Le Nouvel Observateur magazine.

Deneuve was 1994 Goodwill Ambassador of UNESCO appointed to sign up for the preservation of film heritage use. On November 12, 2003, she resigned from her honorary office to protest against the appointment of French businessman Pierre Falcone as Angola representative, as this would give him legal immunity in relation to investigations into the illegal arms trade.

At the end of 2003 Deneuve used a radio commercial for “Douleur sans frontières” to solicit donations for the victims of landmines .

Since 2008 she has been a member of the Waris Dirie Foundation, a foundation that campaigns against genital mutilation of women and girls .

As part of a collective of 100 women, Catherine Deneuve participated in an open letter that appeared in the French daily Le Monde on January 9, 2018 , criticizing the effects of the debate sparked by the #MeToo initiative. Since the letter was seen by many as an attempt to relativize the meaning of the grievances mentioned in the #MeToo debate, it sparked a controversial discussion.

"You don't have to be drunk to want to sleep with Catherine Deneuve - no matter what sexual orientation you had before."

"She is so beautiful that a film in which she plays can do without a story."

A bust of the French national figure Marianne was created in 1985 based on Catherine Deneuve's image . She donated the proceeds from the municipalities' purchase to Amnesty International . Before her, Brigitte Bardot (1970) and Mireille Mathieu (1978) had already received this honor , her successor was Inès de la Fressange in 1989 . In 2000, a "Golden Palm" star was dedicated to Catherine Deneuve on the Palm Springs Walk of Stars .