Marie Bonaparte, Princess of Greece and Denmark in Greek costume, around 1907

Through her father, Roland Bonaparte , she was the great-granddaughter of Lucien Bonaparte , the brother of Napoléon Bonaparte . Her mother, Marie Blanc, died of tuberculosis a few weeks after she was born . Her maternal grandparents were François Blanc and his wife Marie , who became rich as concessionaires at the Monte Carlo casino .

As the designated heiress of the considerable maternal fortune, she grew up as a half-orphan under the care of changing nannies and governesses in the household of the mostly absent father. Her paternal grandmother acted as head of the household. The impoverished Bonapartes were very worried about little Mimi , who was shielded from all potentially harmful external influences. She wasn't allowed to play with her peers to prevent infectious diseases. Contact with the mother's relatives was also cut. Mimi took refuge in writing horror stories, which she worked on decades later, during her treatment by Sigmund Freud , with his help.

Marie Bonaparte with her two children, 1912

In the summer of 1898, sixteen-year-old Marie fell in love with her father's secretary, who courted her and brought her into opposition to the Bonapartes' paternal family. Roland Bonaparte finally fired his apparently corrupt secretary. This then used the love letters of the sixteen year olds to blackmail the Bonapartes. Marie felt betrayed and fell into a depression, the violent hysterical side effects of which brought her to treatment by a student of Charcot .

On November 21, 1907, she appropriately married Prince Georg of Greece from the house of Schleswig-Holstein-Sonderburg-Glücksburg . They had two children: 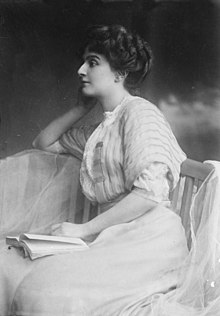 Princess Marie of Greece and Denmark, around 1910

Marie Bonaparte suffered from frigidity for life . Conceiving their children was more of a chore than a satisfying act of love for both parties involved. The penetration left her practically cold. Symbolically, she felt the penetration as a traumatic threat , as a sadistic intrusion into her being, aimed at her destruction.

She was friends with René Laforgue , one of the leading French Freudians, and dealt with Freud's view of problems of female sexuality, in particular with his development-theoretical assessment of infantile-clitoral and mature vaginal erogenicity . In contrast to Freud's concept of psychosexuality , she believed that her frigidity and that of other women were anatomically conditioned by the distance between the clitoris and the urethral meatus ; later she recommended surgery to shorten the distance between the clitoris and the vaginal opening in order to cure the frigidity . At the same time, she criticized Freud's idea of ​​the necessary detachment of the clitoris as an erogenous guiding zone:

“For all women, the clitoris is the central organ of sexual pleasure, despite the vaginal sensitivity of the vagina, which will never succeed in replacing the clitoris. Because the clitoris corresponds to the penis (...) the normal woman cannot experience pleasurable contacts without it, just as the man without his penis. "

After Rene Laforgues failed to mediate, she contacted Sigmund Freud directly in 1925 , who finally agreed to treatment. An initial analysis, lasting around six months, began in the autumn, which was later refreshed with shorter sessions. She rediscovered her notebooks from childhood and was able to establish connections between the nightmarish stories and forgotten, repressed real events of that time. Accompanied by Freud, it became clear to her that at an early age she had witnessed various sexual practices (including fellatio ) between her carer and a groom. She had noted these disturbing experiences, among other things, in her child's exercise books in a symbolically distorted form, in order to be able to translate them back into reality and check them. She questioned the former groom who eventually confirmed the reconstructed story. For Marie Bonaparte, however, the scientific nature of psychoanalysis had become a certainty. However, Freud was unable to remedy their special “frigidity” either. In 1927 she had the Viennese gynecologist Halban perform the operation for which she had previously advertised.

A close friendship developed from the treatment with Freud, which was initially planned as a didactic treatment. Marie Bonaparte, Freud's princess , used her social status and wealth for the Freudian cause. As Mme Freud-a-dit , she became a leading founding member of the Société psychanalytique de Paris (SPP, November 4, 1926) and the Revue française de psychanalyse (1927). She translated Freud's works into French and wrote studies on Edgar Allan Poe , drive theory and female sexuality .

From the mid-1930s she was one of the first women scientists to research the consequences of female circumcision in Africa.

In 1937 she acquired the letters that Freud had written to his former friend Wilhelm Fließ , thus securing documentary material from the early days of psychoanalysis, not least from the author himself. After the "Anschluss" of Austria in March 1938, she was crucial to his success Escape from the National Socialists by interpreting the “ Reich Flight Tax ” for him , which Freud later returned to her in London .

She died at the age of eighty and was buried in Greece in the Tatoi Royal Cemetery . Bonaparte's relationship with Sigmund Freud as a patient and friend was dealt with in the 2004 television film Princesse Marie (German title: Marie und Freud).

Translations of works by Sigmund Freud