This article deals with the brother of Emperor Napoleon I. For his grandson of the same name, Cardinal Lucien Bonaparte (1828–1895), see Lucien-Louis-Joseph-Napoleon Bonaparte . 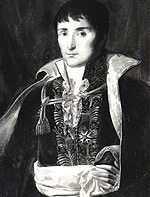 Lucien Bonaparte (born Luciano Buonaparte on 21st May 1775 in Ajaccio , Corsica , since 1814 Principe de Canino e Musignano ; † 29. June 1840 in Viterbo , Italy ) was a member of the Bonaparte family and brother of the French Emperor Napoleon I .

Lucien was the third son of Carlo Buonaparte . After his training in France he became one of the most radical spokesmen for the Jacobin Club in Ajaccio in 1789 . When the Welfare Committee initiated the de-Christianization , he dropped his first name and temporarily called himself Brutus Buonaparte .

As a supporter of Robespierre he was arrested on July 27, 1794 ( 9th Thermidor ) in Aix-en-Provence after his fall. Thanks to the intervention of his older brother Napoleon , he barely escaped the guillotine . 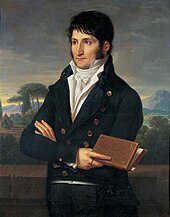 As President of the Council of Five Hundred in Saint-Cloud , he chaired this Parliament in the coup d'état of the 18th Brumaire VIII . In this position he managed to have his brother Napoleon elected First Consul on November 10, 1799 . He himself became Minister of the Interior.

From 1800 ambassador to Spain , he attacked together with Manuel de Godoy (1767-1851), the First Minister of Spain, in the so-called Orange War (Spanish Guerra de la Naranjas ) Portugal . Instead of occupying the land as his brother wanted, Lucien and de Godoy extorted high compensation for themselves and granted the mild peace of Badajoz . Napoleon was furious and called his brother a scoundrel and a thief.

After falling out with his brother Napoleon over his second marriage, Lucien withdrew to his lands in Canino in Italy in 1804 . When he wanted to emigrate to America in 1810 , he was captured by the British , which lasted until 1814. Meanwhile, he resided at the Thorngrove country estate in Worcestershire . Released by the British, Pope Pius VII raised him to Principe de Canino e Musignano in 1814 and thus sovereign ruler by papal grace over his lands.

Despite his differences with the emperor, he supported Napoleon on his return of the Hundred Days in 1815 . After the battle of Waterloo and the final abdication of Napoléon, Lucien was arrested in Turin by the king of Sardinia and released after the intervention of Pius VII. In the course of the Restoration of the Bourbons , he was banished from France in 1816 and lost his seat in the Académie française. He spent the rest of his life in Italy. There he excavated Roman works of art as a hobby archaeologist and became interested in the Etruscans. In 1823 he was elected a member of the American Philosophical Society .

As an author, Lucien wrote works in prose and rhyme form; so the novel La Tribu indienne (German The Indian tribe ) and the poem Charlemagne about Charlemagne .

In his first marriage, Lucien was married to the wealthy heiress Christine Boyer (1773-1800) from 1794 . In 1803 he married Alexandrine de Bleschamp, Hippolyte Jouberton's widow known under the name Madame Jouberton; the couple had ten children together. This marriage with a woman who was considered inappropriate was entered into against Napoleon's will and led to a rift between the two brothers.

His great-granddaughter Marie Bonaparte was a pioneer of psychoanalysis and a companion of Sigmund Freud . There were other descendants, the scientific inclinations had: The marriage of Lucien's daughter Letizia with the Englishman Thomas Wyse went Louis Lucien Napoleon Wyse out who explored the Isthmus of Panama. Lucien's grandson Roland Bonaparte (a son of Pierre Napoleon Bonaparte) was a well-known anthropologist.