Ajaccio ( French [ aʒakˈsjo ], Italian [ aˈjattʃo ], Corsican Aiacciu [ aˈjaʧːu ]) is a French commune with 70,659 inhabitants (as of January 1, 2017) and the capital of the Mediterranean island of Corsica . Within the structure of France , Ajaccio is the capital of the Corse region (Corsica) and the seat of the prefecture of the Corse-du-Sud (southern Corsica) department.

Napoleon Bonaparte was born in Ajaccio in 1769. Ajaccio is a founding member of the Federation of European Napoleonic Cities .

View through the city center to the harbor

Ajaccio is located on the north bank of the gulf of the same name on the southern west coast of Corsica . About ten kilometers to the west, on the Gulf of Ajaccio, is the Îles Sanguinaires archipelago .

The commercial port is the second largest on the island after Bastia . Ferries connect Ajaccio with Marseille , Toulon and Nice all year round . During the season there are also inner-Corsican ferry connections to Calvi and Propriano . Ships from numerous cruise lines call at Ajaccio.

At the port is the Corsican Railway Station ( Chemins de fer de la Corse ). Corsica's rail network is 230.6 km long and connects the port cities of Bastia and Ajaccio. From Ponte-Leccia there is a route to Calvi .

The public bus transport in the city is operated by the company Muvistrada . The standard ticket costs € 1 per journey and person (as of May 2018). For example, the bus line 5 runs from the centrally located Place Charles de Gaulle along the coast 10 km in a westerly direction to the excursion destination Pointe de la Parata at the end of the Route des Sanguinaires.

Blazon : In blue a silver column standing on a green shield base with a three-pointed silver crown hovering over it, held on both sides by two upright facing golden lions, the rear foot resting on the column base.

Until 1768 Corsica belonged to the Republic of Genoa in what is now Italy. That is why the coat of arms of Ajaccio shows references to Italy: The column with the crown comes from the coat of arms of the Roman family Colonna , the original heraldic animals - dogs - have been replaced by lions.

The inner city is characterized by narrow, shady streets with multi-storey old houses. In the surrounding quarters there are spacious boulevards with magnificent villas. The facades of the houses are mostly kept in warm red, orange and yellow tones.

The west side of the city is characterized by harbors: the Gare Maritime is located between two yachting harbors, with piers for large ferries and cruise ships. The citadel Ajaccio at the southwest tip is a distinctive landmark that separates the city's western and southern seashore. This southern bank is characterized by a boulevard that stretches 10 km beyond the city to the Pointe de la Parata headland. The entire southern bank is lined with sandy beaches.

The Genoese old town with its narrow streets is heavily touristy. It extends with a diameter of around 250 m northwest of the citadel. In front of the citadel lies the most elegant marina, the Port de Plaisance Tino Rossi . Within this marina, the fishing port of Port Abri lies in the shadow of the citadel. The top of the Jetée de la Citadelle on the outer pier of the marina offers a view of the port, city and the bay of Ajaccio. The citadel itself can only be visited as part of an organized tour of the tourist office.

To the north of the old town is Place Maréchal Foch, also known as Place des Palmiers, with the monument to Napoléon Bonaparte adorned with four lions . The city hall is located on the avenue Serafini, which borders the north side of the square. Several times a week there is a market on the square selling Corsican products, especially Corsican sausages and Corsican cheese. Every Thursday in July and August, the Association du 2e Regiment des chasseurs à pied de la garde organizes a parade in the original uniforms of the Napoleonic period. To the north of the square is the lively shopping district around the pedestrianized Rue du Cardinal Fesch.

Monument to Pasquale Paoli in front of the citadel

Napoleon Bonaparte is omnipresent in his hometown of Ajaccio. In addition to the aforementioned monument on the Place Maréchal Foch, a monumental statue stands above the city on the Place d`Austerlitz. Key data of his résumé are engraved on the slope below. From the statue one has a line of sight through the Cours Général Leclerc and the Cours Grandval through the newer part of the city center to the port. In the old town is the house where Napoleon was born, Maison Bonaparte .

A statue of Napoleon in the form of a Roman consul, the Monument à Napoléon Ier et ses frères , stands on the large free Place Charles de Gaulle immediately west of the old town. Statues of his brothers Joseph , Lucien , Louis and Jérôme are grouped around the statue of Napoleon . A war memorial reminiscent of the world wars stands on the southeast side of the square . With the bust of Napoleon II, there is also a small monument to Napoleon II in the city. In front of the Palais Fesch , the Fesch monument commemorates Cardinal Fesch.

A bust of the freedom fighter, democratic constitution-maker and Bonaparte opponent Pasquale Paoli , the Paoli monument , is erected on Boulevard Danielle Casanova between the old town and the citadel.

Reading room of the municipal library

The Cimetière d`Ajaccio with many, partly monumentally designed family burial chapels is located on the southern bank boulevard on the edge of the inner city area . There is also a smaller burial chapel for the local born singer Tino Rossi . Outside the cemetery is a series of particularly large chapels, the Sept Chapelles .

The western headland of Pointe de la Parata is dominated by a Genoese watchtower. The tower itself cannot be entered. Its hill and the headland below offer a panoramic view of the extended bay of Ajaccio, of the mountain and coastal landscape south of it, over to the island chain of the Îles Sanguinaires , out to the open sea and over to the northern coastline. You can take a boat to get to the islands. A hiking path leads over the cliffs and through the macchia to the north to secluded beaches and to Capo di Feno with its lighthouse.

The municipality is home to the AC Ajaccio and Gazélec FCO Ajaccio football clubs . 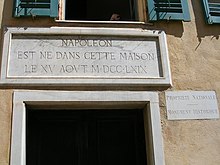 Inscription at the entrance to Napoleon's birthplace

Place Foch, Napoleon Bonaparte on the fountain of the four lions 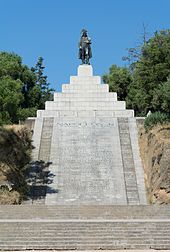 Place d'Austerlitz, monument to Napoleon and his successes

Municipalities in the Arrondissement of Ajaccio