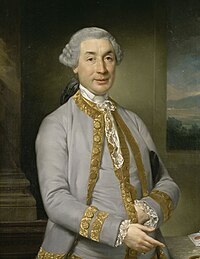 The Buonapartes family, which is part of the Corsican nobility, originally came from Sarzana in Liguria , where they belonged to the patriciate of the city, and came to Corsica in 1490 with the Genoese colonization.

Carlo lost his mother Maria Saveria Paravisini (1715–1750) at the age of four. At the age of seventeen he lost his father Giuseppe Maria Buonaparte (1713–1763) ( for further ancestors see there ). His brother, the archdeacon Luciano Buonaparte (1718–1791), took care of Carlo beforehand and sent him to Corte for training.

It was in Corte that Pascal Paoli , the leader of Corsica, which was virtually independent except for a few Genoese- controlled cities, became aware of Carlo. On his advice, Carlo studied law at the University of Pisa from 1762 , but interrupted his studies in 1764 so that he could ask for Letizia Ramolino's hand . They married on June 2, 1764 in Ajaccio.

Not long after his marriage, Pascal Paoli looked for a legal advisor in him, and Carlo di Buonaparte was instrumental in drafting the Corsican constitution. At the age of 20 he became Paoli's secretary and was sent to Rome as a special envoy to campaign for the independence of Corsica, which at the time was the papal fiefdom of Genoa. However, due to Buonaparte's skilful intervention, the Vatican refrained from retaliation against the Corsicans.

After the Genoese sold the island to France on May 15, 1768, Paoli fought the French and Carlo di Buonaparte joined them, with his pregnant wife and son Giuseppe accompanying him into the mountains. As captain of a company of partisans, Carlo di Buonaparte was able to take over 500 prisoners in an attack on Borgo and to force the French commander-in-chief Chauvelin to hold an armistice until winter.

A year later, a much larger French army landed with 45 battalions of infantry, several gun batteries and three cavalry regiments under the command of Noël de Jourda, comte de Vaux . When Paoli was defeated at Ponte Novu on May 9, 1769 , Carlo di Buonaparte held the resistance on Corsica's second highest mountain, Monte Rotondo , in a cave for two weeks until a French parliamentarian invited him to negotiate on May 23 brought with Count Vaux.

Carlo di Buonaparte learned of the capture of Paoli's capital, Corte, and of Paoli's surrender. In Corte, Count Vaux proposed to him and all freedom fighters a peace with amnesty and promised that France would protect the Corsican identity and promote the way of life and prosperity of Corsica. Since he had a family to support, Buonaparte finally submitted and did not, like Paoli, go into exile in England , but stayed in Ajaccio, where he received all his goods back.

When a son - a Frenchman - was born on August 15, 1769 in the house of the Maison Bonaparte family , they named him Napoleone after an uncle who had fallen in battle - in Corsican Nabulione . Buonaparte quickly finished his studies in Pisa and took the oath of a French lawyer on December 11, 1769 to work as such. In addition, he also took care of agriculture. On May 10, 1771, he became a judge in the Ajaccio district, but continued to work as a lawyer and in his fields. During this time Buonaparte won a self-initiated lawsuit for the surrender of Letizia's dowry, which led to a foreclosure auction of natural produce.

On September 13, 1771, he achieved French nobility recognition with the associated privileges. In the files he is listed there as Charles-Marie de Buonaparte . Since he dressed in velvet and silk befitting his status, he was nicknamed "Buonaparte il Magnifico" (The Magnificent). In 1772 he received a seat on the council of the 12 nobles , the professional parliament and influential self-governing body of Corsica. In 1778 he was given the honor of being in a delegation representing the three estates - he for the nobility - King Louis XVI. to visit the Palace of Versailles , where on March 10, 1779 he spoke to both the king and Marie Antoinette , expressed the loyalty of Corsica, but also reported of worries and problems of the island.

The family was not poor, but with the increasing number of children lived in limited circumstances. With the recognition of nobility and the associated tax breaks, servants and nannies, and at times even a cook, could be afforded. The judge's office brought in only a small part of the annual income, the main income came from agriculture, through several fields and vineyards. Two apartments, a shop, the usage fees for a grain mill and an oven brought additional income.

Carlo di Buonaparte spent himself financially in the drainage of a salty marshland because the state funds were initially missing. Among other things, he introduced the potato to the island with his friend, the military governor of Corsica, Count Marbeuf. Marbeuf was the family's sponsor and supported them financially for the education of the children.

In the last years of his life he stood up in the Corsican Parliament for the unity of Corsica to France - and thus against a return of Paoli or a turn to England.

With his wife, Letizia, he had eight surviving sons and daughters. The first two children died early, then came Joseph and Napoléon. After two miscarriages, the other children followed. Apart from the last three, who were still too young, Charles-Marie de Buonaparte took care of his children's careers. In the government of Louis XVI. there were scholarships for the sons of the deserving poorer nobility. Charles Buonaparte's efforts in the agricultural sector in Corsica made him well-deserved, and the financially strained situation of swamp drainage made him poor enough that his sons Joseph and Napoléon, and later Lucien, also benefited from these scholarships. It was certainly important for their upbringing that Buonaparte built the largest private library in Corsica and that the children grew up with books. Joseph Bonaparte was originally supposed to be a clergyman, but became a lawyer like his father. Lucien Bonaparte submitted several constitutional drafts for France, which included features of the Corsican Paoli constitution.

When he fell ill in 1784, he was examined by the Queen's personal physician in Paris, but all the cures did not help. On another trip to Paris to see the ministers, he became so ill that, on the advice of doctors, he went to the medical school in Montpellier . At the age of 38, Charles-Marie de Buonaparte died on February 24, 1785, in the presence of his son Joseph, of stomach cancer in Montpellier, where he was first buried. In 1803, with the consent of Letizia and Joseph and against the will of Napoléon, his son Louis had him buried on Louis' property near Saint-Leu. In 1951 the bones were solemnly brought to Ajaccio.

Buonaparte was almost never mentioned by his descendants. When the city of Montpellier wanted to erect a memorial to him twenty years after his death, Napoléon, the first consul at the time, forbade it on the grounds that he had been dead too long.