Sarzana is a small Italian town on the Magra River in the province of La Spezia in Liguria with 22,148 inhabitants (as of December 31, 2019). Two fortresses shape the image of the place: the castle Fortezza di Sarzanello by Castruccio Castracani on a hill above the city, on whose construction Matteo Civitali helped, and the castle Firmafede ( La Citadella ) in the historical center. 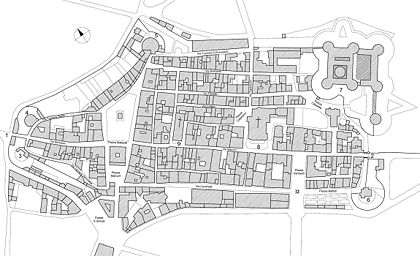 The name Sarzana is mentioned for the first time in a document from Emperor Otto I on May 19, 963. In a sense, it is taking over from the ancient city of Luna , which was abandoned because of the gradual swamping and thus the malaria contamination and the Saracen invasions of that time . Sarzana experienced an upswing in 1163 when it was directly subordinate to the emperor and was thus allowed to raise road tolls and to surround itself with a protective wall. Later Sarzana belonged alternately to Pisa , Lucca , Genoa and Florence . From 1562 Sarzana finally fell under the rule of Genoa and Liguria .

Intermarine shipyards are located at the mouth of the Magra. The Sarzana-Luni military airfield is nearby .

On November 29, 1953, a memorial plaque was erected in Piazza S. Giorgio for Rudolf Jacobs , who had joined the Resistance as a deserted Wehrmacht soldier . In addition, he was made an honorary citizen of the city posthumously .

Partnerships exist between Sarzana and the French municipality of Villefranche-de-Rouergue in the Aveyron department and with the Hungarian city of Eger .

Municipalities in the province of La Spezia in the Liguria region