Bourg-Saint-Pierre ( German formerly St. Petersburg ) is a political municipality and a civil parish in the district of Entremont in the French-speaking part of the canton of Valais in Switzerland .

The village is located in Val D'Entremont. The municipality borders on Orsières to the west, Liddes to the north and Bagnes to the east . In the south lies the Swiss border with Italy .

The Great St. Bernhard pass and the hospice on the Great St. Bernhard belong to the municipality of Bourg-Saint-Pierre . In the municipality there is also the beginning of the approximately 6 km long, completely avalanche-proof roofed access road to the north portal of the Grosser-St.-Bernhard-Tunnel , located south near Bourg-Saint-Bernhard, on the Swiss main road 21 as part of the Europastrasse 27 . 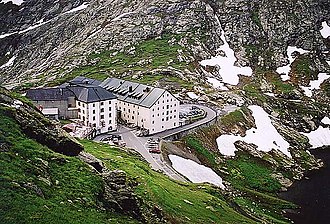 Hospice on the Great St. Bernhard

Political communities in the Entremont district