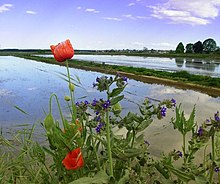 Vercelli ( Italian pronunciation ? / I , Piedmontese Vërsèj , Walser German and outdated German Wertaal ) is a town in the Italian region of Piedmont with 46,558 inhabitants (as of December 31, 2019). It is the capital of the province of the same name .

The city lies at an altitude of 130 meters above sea level and extends over an area of ​​79 km².

In the time of the Roman Empire the city was called Vercellae . Already in the 10th century BC There was a Celtic settlement. South of today's city, Gaius Marius won the battle of Vercellae against the Cimbri in 101 BC. BC on the Raudian fields. The city was fortified at the beginning of the imperial era. In late antiquity, the city was significant due to its size and the most important center of the Nicene people in northern Italy.

The Vercelli diocese was established early on . The first bishop was the legendary Eusebius of Vercelli . In the Middle Ages, Vercelli was an important bishop's seat due to its strategic location in the run-up to an important Alpine pass. During the time of the Lombards , V. was the seat of a duke and had the right to mint gold coins. In the 10th and 11th centuries, the bishops Atto von Vercelli and Leo von Vercelli were able to further expand the power of their city through royal privileges and successfully defend it against various attacks by their opponents (under the leadership of the Marquis Arduin of Ivrea ). Power struggles within the clergy in the second half of the 11th century weakened the position of the church in the city. In the middle of the 12th century, Vercelli was transformed into an independent republic that was involved in the Lombardy League of Cities. The first university in Piedmont was built in Vercelli in 1228. Power struggles within the urban factions ended the city's heyday in the second half of the 13th century. In the 14th century, the city was under the power of the Visconti family , but they finally had to cede them to the Duchy of Savoy in 1427 .

Vercelli is considered to be the largest handling point for rice in Europe. This is also where the Istituto Sperimentale di Risicoltura di Vercelli had its seat, which for about 50 years from 1912 to 1952 described the peculiarity of the baraggia and the rice grown there in the journal Giornale di Risicoltura every month . In 1952 this journal was replaced by the publication Il Riso , published by the Italian Rice Authority ( Ente Nazionale Risi ). There is a famous women's prison in Vercelli. In 2015 Pier Giuseppe Dellavalle tried to found a state of its own called Dellavalle due to a dispute with the municipality in the municipality .

In Vercelli to the highway junction A26 and A4 , on the Turin , Milan and Alessandria are within easy reach. Various country roads connect Vercelli with the towns in the vicinity. Vercelli is on the Turin-Milan , Vercelli-Pavia and Vercelli-Valenza railway lines . The city has a small airfield for general aviation . The nearest commercial airports are Turin and Milan-Malpensa .

The large city coat of arms shows above the shield a golden wall crown, inside red, made of a two-story wall and five three-pinned conical round towers, each with a black portal and two black windows on top of each other, on the right by a laurel branch, on the left by an oak branch in natural colors, both with one Ribbon tied together in the Italian national colors and covered with a silver currency ribbon; then the motto : "POTIUS MORI QUAM FOEDARI" ("Better to die than be dishonored").

Piazza Cavour with the Angel Tower

The football club Pro Vercelli won a total of seven Italian championship titles. His most famous player was, from 1930 to 1934, Silvio Piola (called "Adler von Vercelli"), the later center forward of the Squadra Azzurra during the World Cup in 1938 and the so-called "inventor of the fall retractor ".

Vercelli's twin towns have been Arles in Provence (France) since 1970 and Tortosa in Catalonia (Spain) since 2003 . There is a friendship treaty with the English city of Ely in the east of Cambridgeshire .

Municipalities in the province of Vercelli  in the Piedmont region