Pietrasanta is a small Italian town with 23,542 inhabitants (as of December 31, 2019) in the province of Lucca in northern Tuscany .

Pietrasanta is about 30 km north of Pisa at the foot of the Apuan Alps . The district of Marina di Pietrasanta by the sea is a well-known seaside resort.

Remnants of the wall indicate settlement as early as Roman times. The city was founded in 1255, when the Milanese Guiscardo Pietrasanta, namesake of the place, had a settlement built at the foot of an already existing Lombard fortress. In the Middle Ages, rulership changed several times between the city-states of Genoa , Lucca and Florence . After an arbitration, by decision of Pope Leo X of the Medici family in 1513, Pietrasanta and its area with the port of Motrone - at that time the only one in Versilia - came to Florence, under whose rule it remained until the unification of Italy. A period of decline followed in the 17th and 18th centuries, partly due to malaria .

Leopold II , Grand Duke of Tuscany and Archduke of Austria, promoted the reconstruction in the 19th century and created the economic basis for the return to its former importance as the city of marble by setting up schools for stonemasons .

The name Pietrasanta (Italian pietra : stone, santa : holy) says it all. In fact, stone processing is of particular importance here . In the nearby marble quarries of Carrara , one of the world's best sculptor marbles called Statuario is quarried, which is processed in many companies in and around Pietrasanta. Less pure, white and gray varieties of the marble extracted there are also cheap and practical building materials in Pietrasanta. Many everyday objects in the city such as window sills, mailboxes, sidewalks, electrical boxes or garbage bins are made of the finest white marble. 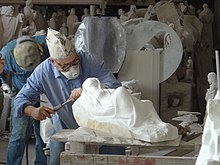 Quite a number of stonemasons, sculptors and other artists who work with stone have settled here. One of these well-known artists is Fernando Botero . However, marble is not the only material used in handicrafts. Many artists, almost all of them very elderly Italians, work with other materials, especially copper and glass , with which artistic mosaics are laid.

Pietrasanta has partnerships with the following cities and municipalities:

Municipalities in the province of Lucca in the Tuscany region