This article describes the city in Switzerland, for further meanings see Martigny (disambiguation) .

Martigny ( French [ maʀtiɲi ], in the Franco-Provencal local dialect [martiɲˈəː] , [a martəɲˈi] , German  Martinach ) is a municipal municipality , a civic community with a civic council and capital of the district of the same name in the Swiss canton of Valais . The German name Martinach is still in use in Upper Valais .

The town of Martigny is located in the French-speaking Lower Valais , on the alluvial land of the Dranse on the Rhone knee.

The community consists of the districts :

Martigny-Combe on the left bank of the Dranse forms its own political municipality. 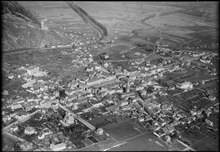 The vicus Octodurus is first mentioned in Julius Caesar's Bellum Gallicum in connection with the Battle of Octodurum in 57 BC. Called ("in vico Veragrorum, qui appellatur Octodurus"). In AD 47, in Roman times, the place was officially called Forum Claudii Augusti or Forum Claudii Vallensium, but the original name is again documented from the sources from 280 onwards. The first mention of the current name Martigny dates from 1058 ("usque Martiniacum").

Octodurus is an uncertain Celtic name; possibly it means "eight gates". Forum Claudius Augusti / Vallensium pays tribute to the Roman emperor Claudius , who elevated the area of ​​today's Valais to the province of Vallis Poenina . The name change from Octodurus to Martiniacum is explained with the abandonment of the ancient city at the end of the 4th century and the move of the population to a younger settlement in the neighborhood. The new name goes back to the Latin personal name Martinius , combined with the Celtic suffix -akos, -acum, and means "among the people of Martinus", thus referring to a landowner in late antiquity.

From 381 to 585 the first bishops of Valais, the predecessors of the bishops of Sion , resided in Octodurus. In the Middle Ages the place belonged to the episcopal Kastlanei Martigny, which in 1351 placed itself under the protection of the House of Savoy . After the seven Upper Valais Zehnden had conquered the Lower Valais in 1475, they incorporated Martigny into the Landvogtei Saint-Maurice . Thanks to the privileges of the Bishop of Sitten and the Count of Savoy, the citizens were able to choose their local authorities themselves.

In 1800 Napoleon Bonaparte crossed the city with the French Italian army. 1840–1847 the place was the center of clashes between the Liberals and the Conservatives ; the former, the "Young Switzerland", was defeated in 1844 in the battle of Trento, which was fought near Martigny. Martigny is still a bastion of the Free Democratic Party or the FDP, the liberals in the largely conservative canton of Valais.

The population of Martigny has developed as follows since 1850 (for the period before 1956 and 1964, the figures for the former municipalities of Martigny-Ville, La Bâtiaz and Martigny-Bourg are added together):

According to information from Meyer's Konversationslexikon, Martigny la Ville had 1,525 inhabitants around 1888, Martigny le Bourg 1,303 and Martigny-Combe 1,714 inhabitants.

The Martigny General Council ( conseil géneral ) has 60 members. The authority is traditionally dominated by representatives of the Free Party. For the 2017 to 2020 term of office, it is composed as follows:

In the previous term of office, a group of the SVP was represented in the Conseil général ; the party won five seats in the 2012 elections, while the CVP lost three and the FdP and the Social Democrats lost one seat each.

In 2020, Jean-Pierre Terretaz is President of the Conseil général of Martigny.

The city of Martigny is a regional center for the Lower Valais with numerous service companies.

There are several agricultural zones in the wide municipal area. Fruit growing is dominant in the Rhone plain. To the west of the city is a vineyard.

Martigny has large areas of forest on the mountain slopes in the south and west of the plain.

Martigny is the headquarters of the Groupe Mutuel insurance group .

The family-run distillery Morand has been producing spirits in Martigny since 1889.

In the alluvial plain there are areas of gravel pits with quarry ponds, which are of ecological importance for the birds. They are the only larger bodies of water in the Rhone Valley between the nature reserves Poutafontana near Sierre and Les Grangettes on Lake Geneva .

Martigny is an important traffic junction for road and rail.

From the national road A9 , the bypass road A21 branches off to Aosta (Italy, through the Grosser St. Bernhard tunnel ) and to Chamonix (France).

There is an association of traffic enthusiasts on site, some of which receive and operate original vehicles from 1906 (nostalgic trips on the 1-meter railway line, tram).

Sursee, in the canton of Lucerne, is Martigny's friendship city.

To the modern town

To the ancient city

Political communities in the Martigny district