The following important information is missing from this article or section:
History, economy, transport ...
Help Wikipedia by researching and pasting it .

The title of this article is ambiguous. Further meanings are listed under Fully (disambiguation) .

Fully ( formerly German  Füllien ) is a political municipality and a civil parish in the Martigny district in the French-speaking part of the canton of Valais in Switzerland .

Fully is an important wine town in the Valais. See also the article Viticulture in Switzerland . 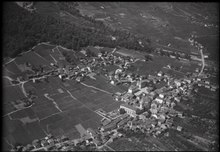 Fully is located northeast of Martigny on the north side of the Rhone Valley at the foot of the Grand Chavalard (2899 m above sea level). The municipality consists of 18 villages and hamlets, namely Fully, Beudon, Branson, Buitonne, Châteignier, Chiboz d'en Bas, Chiboz d'en Haut, Eulo, Jeur Brûlée, Le Carre, L'Etray, Mayen Loton, Mazembroz, Planuit , Randonnaz, Saxe, Tassonières and Vers l'Église. The municipality borders on Bex VD to the north, Leytron to the north-northeast and east-northeast, Saillon to the northeast and east, Saxon to the east-southeast, Charrat to the south-east, Martigny to the south, Dorénaz to the south-west and Collonges to the north-west .

Fully is on the Martigny - Sion post bus line . The Fully-Charrat SBB station is located in the neighboring village of Charrat and is only served by regional trains.

Political communities in the Martigny district