Vineyards near Sion in the canton of Valais

Most Swiss wines are drunk in Switzerland; only one to two percent of the wines produced in Switzerland are exported. The demand exceeds the amount of wine that is usually grown on difficult terrain. This leads to high prices as well as the temptation to create conditions for very high yields. Since the legal framework in Switzerland has tightened through the creation of controlled appellations , the quality of Swiss wine has increased. The growing conditions on only small vineyards on steep slopes are difficult.

Swiss wines are predominantly light wines that are drunk young.

In the canton of Wallis ( French Valais ) grape seeds from an Iron Age context are documented in the Upper Valais Gamsen . In addition, it has been proven that in Valais between 800 and 600 BC. Vines were cultivated. Grape seeds were also found in numerous excavations from the early Roman context. Vine knives were discovered in manors in western Switzerland and cities such as Nyon and Martinach . Old autochthonous grape varieties, such as the Amigne grape (Mitis amoena?) Or Resi (Uva raetica?), Also speak in favor of Roman viticulture in the Valais Alps .

The first surviving documentary mention of vines in Switzerland comes from the canton of Valais from the year 516 from the St. Maurice Abbey , which is the oldest continuously inhabited monastery in the West. From there the vine gradually spread to the monasteries throughout Switzerland, as was the case with the Cistercians in Dézaley . Wine has been cultivated in Vaud since the 6th century.

In the 17th century, the Swiss winemakers experienced their first crisis with the increased import of southern wines, especially from the lower Rhône valley on the French side. At the end of the 19th century, Switzerland was ravaged by powdery mildew and phylloxera . Together with cheap imports and the increasing development of the lakeshore, which is important for viticulture, the area under vines fell from 33,000 ha to 12,500 ha from the end of the 19th century to around 1960.

In 1990, the canton of Valais was the first growing area in Switzerland to introduce a quality wine hierarchy. In the past, it was largely up to a Swiss winemaker which information he wanted to print on the label of the wine bottle. The wines were usually named after place names or grape varieties. There were also wines with their own brand names. The Swiss wine legislation (wine ordinance) provides for three categories of wine:

In Switzerland, around 200 grape varieties are known on a vineyard area of ​​14,835  hectares . The area under vines has been declining slightly but continuously for years. Some of these vines are known internationally and are grown in several countries. There are also autochthonous varieties with a local character such as B. the varieties Petite Arvine, Amigne, Rouge du Pays  (Cornalin du Valais, Walliser Cornalin) and Humagne Blanc from the canton of Valais. There are also smaller vineyards with new varieties such as the Gamaret , Garanoir or Diolinoir varieties . The ratio of white to red wine grape varieties is 42:58.

It has been proven that in the canton of Wallis ( French Valais ) between 800 and 600 BC. Vines were cultivated. Today there are more than 5236 hectares of vineyards in Switzerland's largest wine region, which are cultivated by more than 22,000 small landowners, mostly as a sideline. As a result, around 40% of all wines produced in Switzerland come from the canton of Valais. Starting at Visp , the vineyards follow the course of the Rhone river to Martinach . The vineyards are located on the lower slopes of the mountains at an altitude of 450 to 850 m above sea level. M. with steep slopes of up to 70%; many of the vineyards are terraced. The Riebe vineyard near Visperterminen is the highest vineyard north of the main Alpine ridge . The Valais has an average sunshine duration of 2090 hours with a rainfall of 600 to 800 mm / year. The climatic conditions are therefore similar to those in Bordeaux (France). The Valais is characterized by an unbelievably large number of autochthonous white and red grape varieties, which are often related to also autochthonous grape varieties from the Aosta Valley. Some of them are believed to date from Roman times. The wines are characterized by a great variety: some grape varieties produce more rustic wines, while others also produce world-class wines (especially Petite Arvine, Amigne Blanche and Humagne Blanche). The best-known indigenous red varieties Cornalin d'Aoste  (Humagne Rouge) and Rouge du Pays  (Cornalin du Valais, Walliser Cornalin) are on the one hand vinified individually, but are also often used in cuvées. At about the same time as the interest in autochthonous grape varieties was awakened, the cultivation of Syrah has also increased significantly in recent decades, after it had been shown that excellent wines can be made from this grape variety in Valais.

Indigenous (autochthonous) grape varieties of the canton of Valais are:

The following municipalities have the status of an Appellation d'Origine Contrôlée (AOC):

Well-known wines are the white Fendant , the medium-heavy red wine Dôle and a rosé with the name Œil de perdrix du Valais . 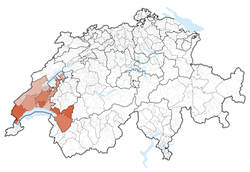 The canton of Vaud ( French: Vaud ) has 3814 hectares of vineyards, making it the second largest wine-growing canton in Switzerland. The Chasselas grape alone accounts for 68% of the vineyard area. The vineyards of the 28 appellations are quite widely spread, so that the canton is divided into four regions from a viticulture perspective:

The canton of Geneva ( French Genève ) has a vineyard area of ​​1340 hectares. Of the total of 45 municipalities in the canton, wine is grown in 35 municipalities. Unlike the rest of Switzerland, the terrain is quite flat. In the Le Mandement region, a total of 879 hectares are monocultured. Over a length of 7 km to the French border, there is one vineyard next to the other. So it is not surprising that the largest community in this region, Satigny, is also the most important wine-growing community in Switzerland. The following municipalities have the status of an appellation: Choully , Satigny , Peissy , Russin , Dardagny , Lully , Bardonnex , Cologny , Jussy , Choulex , Hermance , Céligny , Collex-Bossy .

Drei-Seen-Land (parts of the cantons of Bern, Friborg, Vaud and Neuchâtel) 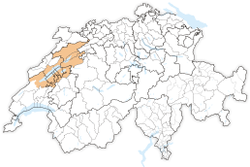 The Drei-Seen-Land ( French Pays des Trois-Lacs ) is a region in Switzerland around the three large Jura lakes Bielersee , Neuenburgersee and Murtensee . This region is located in different cantons, namely in the canton of Bern , the canton of Friborg , the canton of Neuchâtel and the canton of Vaud .

In this area, 945 hectares of wine and vines are cultivated. In the region known for its watchmakers , the Chasselas grape varieties clearly dominate in white wine and Pinot Noir in red wine . The white grape varieties dominate in the three-lake region. In addition, the region's specialty is the rose-colored Œil de Perdrix , a Neuchâtel invention. The canton of Neuchâtel was the first canton in Switzerland to introduce yield restrictions.

There are also wine hiking trails in the middle of the vineyards on Lake Biel, Lake Neuchâtel and on Mont Vully, as well as several museums and exhibitions. The Bern cantonal government awards the “Bern Wine of the Year” award annually to the best wines produced in the canton of Bern. 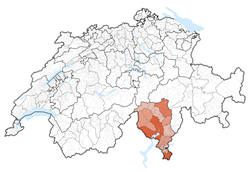 In the canton of Ticino ( Italian Ticino ), the southernmost canton of Switzerland, there is an area of ​​1028 hectares, shared by around 3800 winegrowers. Almost 83% of this area is planted with the Bordeaux grape Merlot , which was introduced here at the beginning of the 20th century. The grapes ripen reliably at heights below 450 m. In higher-lying vineyards you have to switch to Pinot Noir. Most of the 3800 vintners work the vineyard on a sideline basis, there are around 30 full-time vintners in Ticino.

The Merlot wine from Ticino generally corresponds to an appellation, the Ticino DOC Merlot . In addition to the appellation status, Ticino also awards a seal of approval with the name VITI . This seal requires a taste test as well as a general assessment and is only awarded to the better wines. The VITI seal of approval is also awarded to another Ticino specialty, grappa . Wine-growing communities in Ticino are Giornico , Malvaglia , Biasca , Verscio , Gordola , Tenero , Gudo , Giubiasco , Rivera , Morcote , Rovio , Stabio , Morbio , Chiasso with the village of Pedrinate and Castel San Pietro .

Grape variety index for the Canton of Ticino: 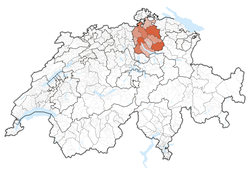 The largest wine areas of the 17 German-speaking cantons are located in the canton of Zurich . The 644 hectares of vineyards are distributed along the shores of Lake Zurich and in regions of the Limmat Valley , Zurich Unterland and Zurich Wine Country . Wine-growing communities in the canton of Zurich are: Freienstein-Teufen , Stammheim , Dachsen , Andelfingen , Flaach , Neftenbach , Seuzach , Eglisau , Weiningen , Meilen , Stäfa , Au , Wädenswil , Richterswil .

Grape variety index for the Canton of Zurich: 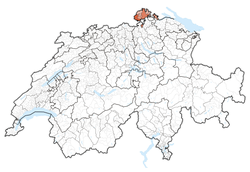 The Schaffhausen wine-growing region, the second largest in German-speaking Switzerland after the canton of Zurich, is spread over 20 wine-growing communities. Basically, there is a subdivision into five sub-areas:

In the canton of Aargau , wine is grown on almost 400 hectares. The cultivation area extends over many small communities, which are mainly located on exposed southern slopes in the main and side valleys. The main grape varieties are Blauburgunder and Riesling x Silvaner. The municipalities in which wine is grown are located in the following seven areas:

The area under vines is growing continuously in the canton of Lucerne . Within 15 years the area tripled to almost 70 hectares today. Almost forty winemakers cultivate as many different grape varieties.

The wine-growing regions of the Canton of Lucerne are divided into four vine regions:

In 2005 the controlled designation of origin (AOC Lucerne) was introduced.

Viticulture is practiced on the shores of Lake Thun in the municipalities of Thun, Spiez, Oberhofen and Hilterfingen. White varieties are Müller-Thurgau and Chardonnay, red varieties are Garanoir and Pinot Noir. In contrast to the wines of the Bernese Seeland, which are included in western Switzerland, the Thunersee wines belong to eastern Switzerland.

The Bündner Herrschaft includes the communities of Fläsch , Maienfeld , Jenins and Malans . Pinot Noir is mainly grown on this relatively small vineyard area; there are also Riesling x Sylvaner (Müller-Thurgau) and Chardonnay. Through this wine region, a leading wine trail .