Fricktaler coat of arms, painted in the old canton school in Aarau

The Fricktal is a region in northwestern Switzerland between the Jura , Black Forest and Rhine with around 82,000 inhabitants.

The Fricktal region is located in the canton of Aargau east of the city ​​of Basel . It consists of the administrative districts of Rheinfelden and Laufenburg am Rhein in Aargau and parts of the administrative districts of Brugg (the three municipalities of Effingen , Elfingen and Bözen ) in the east and Aarau (municipality of Densbüren ) in the south. It borders Germany to the north, the canton of Basel-Landschaft to the west and the Zurzibiet region to the east . The region is crossed in the north by the A3 motorway and the Basel – Zurich railway line ( Bözberglinie ) from east to west. Larger side valleys of the north-south running Fricktal are the Möhlintal in the west and the Mettauertal in the east. 18 communities in the Fricktal form an essential part of the Aargau Jura Park, a “regional nature park of national importance”.

The Fricktal can be divided into two parts. A distinction is made between the more rural upper Fricktal and the suburban lower Fricktal. Economically and culturally, the Fricktal is closely linked to the Basel region. Of the 36 communities in the Fricktal, 8 (all located in the Rheinfelden district) belong to the agglomeration of the city of Basel. The population is concentrated in the lower Fricktal (over 30,000 inhabitants) around the Zähringer town of Rheinfelden (with Kaiseraugst , Magden and Möhlin ) and in the upper Fricktal (around 10,500 inhabitants) around the market town of Frick (with Gipf-Oberfrick , Oeschgen and Wittnau ). 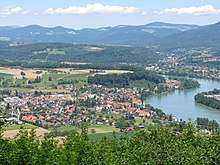 View of Wallbach am Rhein

In the low-lying Fricktaler Rhine plain (lowest point 260 m), embedded between the Jura and the Black Forest , there is a very mild climate. The Basel-Fricktal region is the warmest region north of the Alps and has up to 40 more sunny days than the Central Plateau. On August 5, 2003, the Möhlin weather station reported 40.3 ° C, the highest temperature measured north of the Alps to date. The mild Fricktal climate is therefore ideal for fruit and wine growing , which are increasingly being pursued.

The first traces of life in the Fricktal come from prehistoric times. The dinosaur finds from the Frick area became known nationwide.

The Rhine only briefly formed the northern border of the Roman Empire ; the expansion of the Romans could not be stopped. Extensive Roman buildings and a very well-preserved theater were excavated in Kaiseraugst and made accessible as an open-air museum together with a reconstructed villa. It is a traditional destination for countless school classes. There are also cultural events and concerts by international artists.

The Fricktal is an early settled area of ​​the Alemanni . Via the Counts of Alt-Homberg and the Counts of Frick, the area was inherited by the Counts of Habsburg . From 1386 the Fricktal formed part of the Upper Austrian administrative area and as such belonged to the Breisgau District Office from 1754 . In contrast to Thurgau, which was able to break away from Konstanz, the Swabian War had no territorial consequences for the Fricktal area.

The Thirty Years' War also tore the Fricktal into destruction and economic ruin. Hordes of soldiers plundered the villages and towns. Famine and plague followed .

In 1799 French troops occupied the Fricktal. With this separation from the Habsburg Empire, the more than 400 years of Austrian rule and the name Frickgau, which had been common up until then, ended . On February 20, 1802, the canton of Fricktal was proclaimed a French protectorate . The canton was incorporated into the Helvetic Republic in August 1802 at its own request. However, on February 19, 1803, Napoléon Bonaparte ordered the dissolution of the canton and, together with the canton of Baden , to join the newly founded canton of Aargau .

Miss years and famines followed during the 19th century. The courage to live and the existence of many residents reached a low point and led numerous residents to the emigration agencies in Basel . The general impoverishment in the middle of the 19th century led to the point that emigration had to be encouraged by the authorities. From 1933 the economic situation became dramatic again. The Fricktal became an extreme commuter area (Basel and Baden ).

From 1945 the Fricktal experienced a stormy economic and industrial development. Large-scale industry settled in (especially the Basel chemical industry ), and industrialization advanced. With the urban exodus , suburbanization and population growth began in the lower Fricktal .