Yvorne is a municipality in the Aigle district in the canton of Vaud in Switzerland .

Yvorne is 454  m above sea level. M. , 1.5 km north-northwest of the district capital Aigle (air line). The village extends slightly higher in the vineyards on the eastern edge of the Rhone Valley , on the Torrent d'Yvorne stream , at the west foot of the heights of the Tour d'Aï .

The area of ​​the 12.2 km² municipal area comprises a section of the Rhône Valley and the adjacent slopes of the Vaudois Alps. In the west, the area is bounded by the canalized course of the Rhône, in the south by its right tributary, the Grande Eau . The municipality extends from the Rhône eastward over the flat valley lowland, which is up to 4 km wide. The steep slopes of Plan Favey and Sex des Nombrieux rise from this plain in the north. At Yvorne, at the foot of the slope, there is the area of ​​accumulation of alluvial material from the Torrent d'Yvorne, which is covered with vines. The forest slope of Les Lavanches rises to the east of the village . Below the Alp Prafandaz , which belongs to Leysin , is 1540  m above sea level. M. reached the highest point of Yvorne. In 1997, 9% of the municipal area was settled, 40% forest and woodland, 48% agriculture and a little less than 3% was unproductive land.

Yvorne was a predominantly agricultural village until the second half of the 20th century . Even today, over 55% of those in work in the town are employed in the primary sector. With a vineyard area of ​​just over 160 hectares, Yvorne is one of the most important wine-growing communities in the canton of Vaud. The main grape variety is the Chasselas grape, while Pinot Noir and Gamay grapes are also planted. Both red and white wines are produced. The wide Rhône plain is ideal for arable , vegetable and fruit crops . There are numerous large greenhouses here.

Other jobs are available in local small businesses and in the service sector (especially wine cellars and wine shops). A small industrial zone has emerged on the border with Aigle in recent years. In the last few decades the village has developed into a residential community. Many employed people are therefore commuters who work in the larger towns of the Rhône Valley and in the Vevey-Montreux region.

The community has good transport connections. It is only a little off the main road 9 , which leads from Lausanne via Montreux into the Valais . The next motorway junction to the A9 (Lausanne-Sion), which opened in 1970 and crosses the municipality, is around 3 km from the town center. On June 10, 1857, the Villeneuve-Bex section of the railway line from Lausanne to Valais was opened with a stop in Yvorne. A bus line, which serves the route from Aigle to Corbeyrier, ensures the fine distribution of public transport. 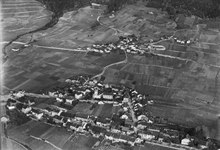 There was probably a settlement in the municipality as early as Roman times . At that time the important trade route ran from Aventicum (Avenches) via Octodurum (Martigny) over the Great Saint Bernard to Italy through Yvorne.

The place was first mentioned in a document in 1020 under the name Evurnum . Later the names Yvorna (1332) and Yvornaz (1588) appeared. Since the Middle Ages, Yvorne has been owned by the Lords of Aigle, who have been under the sovereignty of the Counts of Savoy since the 13th century.

With the conquest of Aigle by Bern in 1476, Yvorne came under the administration of the Aigle governorate . As a result of an earthquake, a landslide occurred on March 4, 1584 on the slope above Corbeyrier, which also severely affected Yvorne and claimed numerous lives. With the support of Bern, the village of Yvorne was rebuilt a little further south from 1608.

After the collapse of the Ancien Régime , the village belonged to the canton of Léman from 1798 to 1803 during the Helvetic Republic , which then became part of the canton of Vaud when the mediation constitution came into force . In 1798 it was assigned to the Aigle district. It was not until 1831 that Yvorne became a politically independent parish when it was separated from the large parish of Aigle.

Yvorne and its hamlets of Vers-Morey, Vers-Monthey and Les Rennauds have preserved the character of typical wine-growing villages with closely spaced wine-growing houses from the 17th to 19th centuries. The church also dates from the 17th century. In the vineyard above the village is the Château de Maison Blanche or Château d'Yvorne, which was built in 1573 and was spared the landslide 11 years later. After a fire in 1974, the castle was rebuilt with a stately round tower.

Political communities in the District d'Aigle