Corbeyrier is a municipality in the district of Aigle in the canton of Vaud in Switzerland . 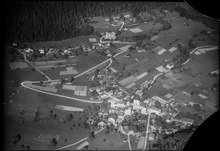 Corbeyrier is 920  m above sea level. M. , 3.5 km north of the district capital Aigle (linear distance). The village extends on a southern slope on the eastern flank of the lower Rhône valley, on the slope of the Tour d'Aï, in a panoramic position around 550 m above the Rhône plain.

The area of ​​the 22.0 km² municipal area covers a section of the Vaudois Alps. The southern part of the municipality lies in the area of ​​the Torrent d'Yvorne torrent on the slope of Corbeyrier. In front of the village are the two forest hills Champillon and Châtillon . Along the stream, the area extends down into the vineyards near Yvorne.

To the north, the municipality extends over the mountain ridge with the limestones Sex des Nombrieux ( 1805  m above sea level ), Sex des Paccots ( 1806  m above sea level ) and Sex du Parc aux Feyes ( 1856  m above sea level ) Alpine pastures in the Eau Froide catchment area. This brook forms the northern border of Corbeyrier. The Argnaule nature reserve is located here with the mountain lakes Lac Pourri , Lac Rond and Lac des Nervaux . In the east the border runs over the Chaux de Mont , on which 2205  m above sea level. M. the highest point of Corbeyrier is reached, and along the limestone walls of Tour d'Aï and Tour de Mayen. In the far north-east the area extends over the pass crossing from Ayerne (the main watershed between the Rhone and the Rhine ) to the catchment area of ​​the Petit Hongrin . In 1997, 2% of the municipal area was in settlements, 52% in forests and woodlands, 36% in agriculture and a little less than 10% was unproductive land.

Corbeyrier was a predominantly agricultural village until the second half of the 20th century . Even today, viticulture (in an area of ​​around 10 hectares above Yvorne) as well as dairy farming and cattle breeding in the highlands have an important role in the income structure of the population. Further jobs are available in local small businesses (carpentry) and above all in the service sector. In the last few decades the village has also developed into a residential community. Many workers are commuters who work in the larger municipalities of the Rhône Valley.

Since the beginning of the 20th century, the emerging tourism brought an economic boom. Corbeyrier developed into a resort with several hotels and guest houses. With the beginning of the Second World War , the hotel industry suffered a slump. Since the 1950s, several hotels have been converted into holiday colonies. At the Ayerne pass crossing there are some training facilities of the Hongrin military area on the parish of Corbeyrier.

The community is located off the major thoroughfares on a connecting road from Yvorne to Ayerne. The village is connected to the public transport network through a postbus course that runs from Aigle to Corbeyrier.

The Corbeyrier area has belonged to the Dukes of Savoy since the Middle Ages . With the conquest of Aigle by Bern in 1476, Corbeyrier came under the administration of the Aigle governorate . As a result of an earthquake, a landslide occurred on March 4, 1584 on the slope above Luan, which destroyed numerous houses in the village. With the support of Bern, Corbeyrier was subsequently rebuilt.

After the collapse of the Ancien Régime , the village belonged to the canton of Léman from 1798 to 1803 during the Helvetic Republic , which then became part of the canton of Vaud when the mediation constitution came into force . In 1798 it was assigned to the Aigle district. It was not until 1828 that Corbeyrier, which belonged to the parish of Aigle, became a politically independent parish.

Political communities in the District d'Aigle