This article deals with the grape variety, other uses of the term can be found under Saint-Laurent . 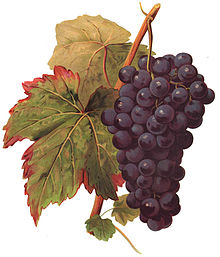 St. Laurent in the book by Viala & Vermorel

St. Laurent is a highly aromatic red wine from the Burgundy family .

The vine is a natural Burgundy seedling.

The origin of the variety is in France or Lower Austria.

The St. Laurent was introduced to Germany from France around the middle of the 19th century by the German pharmacist and viticulture pioneer Johann Philipp Bronner . From there, the grape variety spread to neighboring countries, where it is still relatively common in Austria . In Klosterneuburg it was first planted and spread 1860th The first written mention of St. Laurent in Austria dates back to 1860.

The name may be due to the fact that the first berries are ripe for eating around Laurence Day (August 10th). The fact that the municipality of Saint-Laurent in the Médoc has anything to do with the naming is considered to be impossible.

The yield is medium, but uncertain.

The variety in Austria has grown to 415 hectares since 1999 and expanded to 778 hectares by 2009. From 2009 the area under cultivation decreased to 724 hectares (2015) and is particularly common in the Thermenregion and Neusiedlersee wine-growing regions .

The vineyards in Austria were distributed among the individual growing areas in 2009 as follows:

The grape variety was part of the mixed set in viticulture for a long time in Germany , but has almost died out since the 1950s. The remaining area under vines is said to have been just 27 hectares. With the renaissance of red wine there towards the end of the 20th century, this old variety also received new honors. In Germany in 2010 657 hectares (= 0.7% of the German vineyard area) were planted with the St. Laurent grape variety, after only 185 hectares were surveyed in 2001.

The vineyards in Germany were distributed among the individual growing areas as follows in 2015:

In terms of quality, the St. Laurent lies between the undemanding Portuguese and the high-quality Pinot Noir or Pinot noir . Its berries are less thin-skinned and therefore not as prone to injury as those of the Pinot Noir. The wine is of medium body and has an intense scent of wild berries and black cherries .

The red Zweigelt grape variety is a new Austrian variety from 1922 by Friedrich Zweigelt (1888–1964), later director of the Federal Research Institute for Viticulture and Fruit Growing Klosterneuburg (1938–1945), from St. Laurent and Blaufränkisch . The Zweigeltrebe is the most common red grape variety in Austria. Like the Zweigelt, André comes from a cross between Blaufränkisch and St. Laurent. The variety originated in Velké Pavlovice / Großpawlowitz in the Czech Republic in 1961 and has been registered in the state list of varieties of the Czech Republic since 1980 . She was bred by Jaroslav Horák (1922–1994) at the Institute Šlechtitelská stanice vinařská ve Velkých Pavlovicích .

Neronet is also a red grape variety. The intersection of the new variety was made (German spelling: Wilhelm Kraus) by Vilém Kraus at the Department of gardening and landscaping of the Mendel University of Agriculture and Forestry Brno in Lednice , Czech Republic. Neronet is a cross of (St. Laurent x Blauer Portugieser ) x ( Alicante Bouschet x Cabernet Sauvignon ).

Gm 6494 (or Geisenheim 6494) was a seedling population that was crossed in 1964 by Vilém Kraus from the grape varieties Zarya Severa x St. Laurent. Kraus offered the seedlings to Helmut Becker (1927–1990), who worked at the Geisenheim Research Station at the time, who recognized the importance of this material and further processed it in breeding in progeny tests. The seedling 'Gm 6494-5' was selected from the seedling population Gm 6494 due to its special performance and was later propagated and put into practice under the variety name Rondo as an independent grape variety. Via the crossing Gm 6494, the St. Laurent was included in the new varieties Bronner , Baron , Cabernet Carbon , Prior and Souvignier gris .