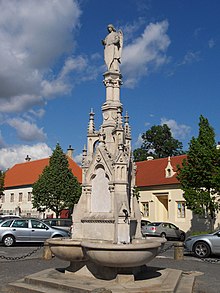 Jubilee fountain on the market square

Lednice (German Eisgrub ) is a municipality with 2366 inhabitants in the Czech South Moravia . It is located on the right bank of the Thaya , eight kilometers northwest of Břeclav (Lundenburg) near the Austrian border and belongs to the Okres Břeclav or Jihomoravský kraj (South Moravian Region) . Lednice is registered with the Lednice Castle as part of the Lednice-Valtice Cultural Landscape on the UNESCO World Heritage List.

The neighboring towns are in the south Valtice (Feldsberg) , in the north Bulhary (Pulgram) and in the northeast Podivín (Kostel) .

In the 11th to 13th centuries there was a great movement of settlements from west to east. Moravia was ruled by the Přemyslid dynasty from 1031 to 1305 . In order to use larger areas for agriculture and thus achieve higher yields, the colonists advertised them with privileges such as ten years of tax exemption (German settler law). Until 1150, the area around Mikulov (Nikolsburg) and Znojmo (Znaim) was populated by German-speaking immigrants from Lower Austria . The ui dialect that was spoken until 1945 and the layout of the village show that they originally came from the Bavarian areas of the dioceses of Regensburg and Passau . They brought new agricultural equipment with them and introduced the high-yield three-field economy .

Over the centuries the name changed several times. So one spoke of "Izgruobi", "Eysgruob", "Aysgrueb" and "Eysgrueb". Eisgrub was granted the right to hold a weekly market as early as 1286, but the place only became a real market town towards the end of the 16th century. In 1426 the church was burned down by the Hussites . Only around 1500 is a pastor mentioned again in the village.

In the middle of the 16th century the Bohemian Brothers took over the parish, so that the place took on the evangelical faith. In 1601, the owner of the estate, Karl von Liechtenstein , reintroduced the Catholic faith. During this time, Croatians were settled in the area. A few years later they fled from an invasion of the Turks around 1600. Until the expropriation in 1945, Eisgrub was the main seat of the main line of the House of Liechtenstein . This built a magnificent castle in the Tudor Gothic style in Eisgrub .

Towards the end of the Thirty Years War , the residents of Eisgrub suffered a Swedish occupation from 1645 to 1646. After the war, 86 houses in the village were destroyed. Later the place suffered from the plague and Turkish invasions . Registries have been kept since 1688, land registers since 1567. In the 18th century a small Jewish community developed in the village.

During the German-Austrian War in 1866, Eisgrub was occupied by Prussian troops. In the 19th century, Prince Johann II of Liechtenstein built a new town hall, a school and a 7 km long aqueduct. In 1884 the Eisgrub volunteer fire brigade was founded. A local railway from Eisgrub to Lundenburg connected the place and the property of the rulership with the main railway lines. Around 1900 a women's hospital was opened by the Sisters of Mercy of the Order of St. Vincent erected by Paul . The House of Liechtenstein also had a poor house built in 1905. During excavations in the castle park, Roman coins from the 2nd century were discovered. Large parts of the population lived from agriculture. Viticulture itself decreased over the centuries in the municipality, instead the wine trade in Eisgrub soon came to the fore. There were four annual markets and one weekly market in town. The annual markets were always on the Monday after Epiphany (January 6th), on the fourth Sunday after Easter, on Aegydius (September 1st) and on the first Sunday in Advent. The weekly market was always held on Wednesdays. In addition to a flourishing small business, there was a sawmill, a canning factory, a cement factory, a pottery factory, a brick factory and a taxi company.

After the First World War , the multi-ethnic state Austria-Hungary disintegrated . With the Treaty of Saint-Germain , Eisgrub, whose inhabitants were 92% German South Moravians in 1910, became part of the new Czechoslovak Republic . In the interwar period , new settlers and newly appointed civil servants increased the influx of people of Czech nationality. During the land reform, starting in 1924, around 2/3 of the princely property was expropriated and largely given to Czech settlers. The place was electrified in 1924. In 1931 a canal system was built in the place. The growing attempts at autonomy by the Germans led to tensions within the country and further to the Munich Agreement , which forced the cession of the Sudeten German territories to Germany. On October 8, 1938, German troops entered the town. Eisgrub belonged to the Reichsgau Niederdonau until 1945 .

In the spring of 1945, roadblocks, trenches and tank traps were erected around Eisgrub. A forced evacuation was ordered on April 14th. One day later, up to 700 people left the place. Most of the refugees returned to Eisgrub in May 1945.

The Second World War claimed 141 victims among the local residents and ended on May 8, 1945. The territories transferred to Germany in 1939, including Eisgrub, were reassigned to Czechoslovakia . Before the onset of post-war excesses fled from the end of May, many German citizens or were in "wild expulsions" over the nearby border into Austria sold . So on May 19, 1945 around 400 people. This resulted in deaths among the civilian population. A legal processing of the events did not take place. With the exception of three people, the remaining 474 German local residents were forcibly evacuated between March 15 and October 3, 1946 in ten organized expulsion transports via Nikolsburg to West Germany. Francis E. Walter's report to the US House of Representatives attests that these transports were never carried out in a “proper and humane” manner. According to the Beneš decree 108, the entire property of the German residents as well as the public and church German property was confiscated and placed under state administration.

In accordance with the original transfer goals of Potsdam, the Eisgruber located in Austria should be transferred to Germany. Nevertheless, about a third of them were able to stay in Austria, the majority of them settled in Germany, two families emigrated to Canada and one family each to Australia and the USA.

The Lednice municipality consists of the districts Lednice and Nejdek (Neudek) , which also form cadastral districts.

Seal and coat of arms

A seal can only be found for the year 1614 or 1629. The size of the seal changed three times until 1918, but the seal image remained the same. It showed a divided oval shield in a dense wreath of leaves. Blazon : In its upper half grow three leafy oak branches, each with an acorn, in the lower half of the shield there is a butted stake.

Although there was no formal award of the coat of arms - there is no evidence of an award presumed for 1614 - the heraldic specialist literature from the 19th / 20th Century the shield from the seal as a market coat of arms. The interpretation and color details are inaccurate: while the post is interpreted as a building made of brick and seven silver acorns (three large between four smaller ones) are mentioned in the upper half of the shield, another book of coats of arms shows the post black and gold nested in the red field.

The Faculty of Horticulture and Landscaping of the Mendel University of Agriculture and Forestry Brno with over 1,100 students has been based in Lednice since 1985 .

The castle after an engraving by Johann Adam Delsenbach in 1848

Say from the place

There was a multitude of legends among the German residents: