from Wikipedia, the free encyclopedia
This is the spotted version , flagged on July 15, 2020 . There is 1 pending change that has yet to be viewed. 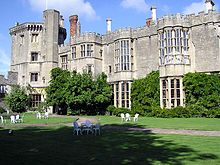 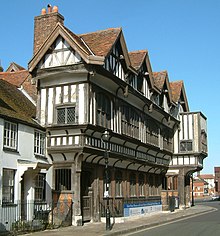 As Tudor style (English. "Tudor style" ) or Tudor Gothic is in the English architecture of the last period of the Gothic style in transition to Renaissance during the reign of Tudor (1485-1603) indicates that seamlessly at the Perpendicular style joins.

Characteristic is the architecture, which adheres to late Gothic detail forms and which only hesitantly takes up elements of the Renaissance, so the Tudor arch is a squat form of the Gothic pointed arch . A "typical" Tudor facade is characterized by rectangular or polygonal ( derived from the octagon ) flanking turrets and bay windows , lancet windows, partly rectangular with a cross , partly with Tudor arches and often crenellated wall ends (also in churches), sometimes interrupted by triangular gables , sometimes lined up Triangular gables without battlements, as well as filigree chimney architectures on the roofs. Symmetry does not play a role in the early Tudor style, rather the diversity of the individual facade sections is emphasized.

A particularly striking feature of the Tudor style is the half-timbered architecture , which repeats the above-mentioned forms in wooden architecture. The asymmetrical aspect of timber construction is underlined by the different half-timbered forms of the individual floors and structures. The Tudor framework was characteristic of late medieval urban architecture in England, and is still visible today, especially in Chester .

Aftermath of the Tudor style

In the further development of the Tudor style (referred to in English art history as Elizabethan architecture , followed by Jacobin architecture ) the Gothic style elements, including the Tudor arch, declined. The facades are also becoming increasingly symmetrical.

Ultimately, elements of the Tudor Gothic style also survived the Baroque architecture of the British Isles. While Tudor was still being built in parallel to the "modern" style of Palladianism throughout the 17th century, Gothic in England experienced a renaissance as early as the 18th century when many castles and country houses were rebuilt or redesigned in Gothic Revival .

In historicism in the middle of the 19th century, the early Tudor style was taken up again in an eclectic form and was later spread in the former British colonies and on mainland Europe. Hotels and train stations , but also private residential buildings, were built in this New Tudor style. In English this is called Tudor revival or mock Tudor . An example of this is Friedrichshof Palace in Kronberg (Ts.), The main train station in Wroclaw and Kórnik Palace near Posen.

Tudor buildings in the British Isles

The town hall of Peitz in neo-Tudor style