Babelsberg Castle, view from the south

Babelsberg Palace was built in two construction phases as the summer residence for Prince Wilhelm, who later became Kaiser Wilhelm I, and his wife Augusta , who came from the Saxon-Weimar family . It stands in the park and district of the same name in the Brandenburg state capital Potsdam . The architects Karl Friedrich Schinkel , Ludwig Persius and Johann Heinrich Strack carried out the planning . The conversation between King Wilhelm I and Bismarck took place in the palace and the adjacent park on September 22nd, 1862 , and ended with Bismarck's appointment as Prime Minister and Foreign Minister.

South side. In the west, the Glienicker Bridge
as a spherical panorama

Babelsberg Palace is under the administration of the Prussian Palaces and Gardens Foundation Berlin-Brandenburg and as a world cultural heritage within the entire Potsdam ensemble under the protection of UNESCO . The architecture of Babelsberg Castle served Schinkel student Friedrich Hitzig as a template for the construction of Kittendorf Castle (1848–1853) in the Mecklenburg district of Demmin.

Since the beginning of the 19th century, Prince Wilhelm was striving to build his own summer palace. After much hesitation, King Friedrich Wilhelm III approved . In 1833 his second oldest son built a new building on the Babelsberg . In the same year, Karl Friedrich Schinkel began planning. He had draft drawings of a Gothic-looking castle, which his master student Ludwig Persius had created for the prince couple as early as 1831. In addition to the clear forms of classicism that was generally prevalent at the time , the Gothic architectural style of English origin also corresponded to the taste of the time, mixed with a transfigured view of the Middle Ages . In the romantic setting, castles were seen as symbols of a united German nation.

Princess Augusta had studied the English Gothic style intensively and acquired in-depth knowledge. Due to their firmly established ideas about the appearance of the castle, there were repeated differences of opinion with the architects. Schinkel planned moderate Gothic forms. However, the difficult builder wanted - according to her personal taste - rich decor, especially inside. Another problem was the financial resources approved by the king only for a castle the size of a country house . So the overall plan could not be implemented at first.

The smaller part of the complex was built in the first construction phase. Large windows with neo-Gothic elements let a lot of light into the interior of the yellow brick building. An extension in the shape of an octagon was used as a dining room and, after the later renovation, as a tea room. The pointed arched windows, which almost reach the ground and are closely lined up, allow many visual connections to the landscape. The first part of the castle was inaugurated in October 1835.

Since the marriage of King Friedrich Wilhelm IV, who had ruled since 1840, remained childless, his younger brother Wilhelm was appointed heir to the throne. Due to the new tasks, the castle seemed too small and not representative enough. The execution of the overall design could now begin. Karl Friedrich Schinkel died in 1841 while the planning was still in progress. His successor Ludwig Persius tried to keep the Schinkel Plan, but like his predecessor he had to bow to Augusta's constant change requests . The connection to the extension building at the back is made by the two- storey dance hall. Its octagonal floor plan takes up the shape of the tea room again. In the new west wing, apart from many other rooms, there were apartments for the children of the prince couple and a hall-like dining room. A mighty tower forms the end. When the foundations for the extension were in place, Persius also died in 1845. 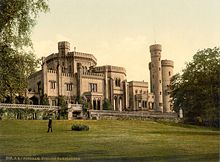 Johann Heinrich Strack received the order to continue. His architectural ideas were more in line with the client's taste. After the completion of the west wing, the second inauguration took place in October 1849.

The Babelsberg Park planned by Peter Joseph Lenné was continued and completed by Prince Pückler from 1843 onwards . An exhibition on these works and the restoration of the park in the 21st century took place in Babelsberg Palace in 2017.

After the death of Wilhelm I in 1888, the imperial successors preferred other castles as residence. A rebuilding of the palace for Crown Prince Wilhelm, planned in 1907 and estimated at 2.5 million marks, based on designs by court building officer Albert Geyer , was not carried out.

The furniture was largely lost due to looting after 1945. From 1949 the Academy for Political Science and Law of the GDR used some rooms as a judges' academy . The lecture halls were in new buildings from the 1950s behind the castle that were demolished in 2008. From 1954 to 1957, the Babelsberg Palace was home to the Film and Television Academy , which had been founded on the premises of the palace.

From 1963 the building housed the Museum of Prehistory and Early History , which was open to the public from 1967. Finds from the preservation of monuments from the districts of Potsdam, Frankfurt / Oder and Cottbus were exhibited here, including material from the imperial burial ground of Kemnitz . Until the opening of the Wall in 1989, the castle was located in the GDR border area with West Berlin and was therefore difficult to access.

The main building in the English Gothic style was built in the first phase of construction. Together with the extension in the second construction phase, the building ensemble occupies an S-shaped floor plan. The clear structure of the facade of the main building was given up for the extension. With turrets, bay windows and various window shapes, it was given a completely different appearance and corresponded to the architecture that was later referred to as the 'castle style'. The round tower on the west side of the castle is dominant.

The interiors are largely provided with neo-Gothic decor and are well preserved. 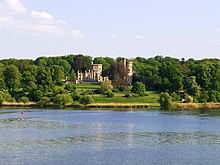 View of the park of the same name that surrounds the castle, directly on the banks of the Havel