Hermann Ludwig Heinrich Count von Pückler-Muskau , from 1822 Prince of Pückler-Muskau , (born  October 30, 1785 at Muskau Castle ; †  February 4, 1871 at Branitz Castle ) was Count of a Free Class , Lieutenant General , Landscape Architect , Writer and World Traveler ( his pseudonym as author and traveler: "The Deceased" or "Semilasso") and at that time a well-known member of high society. In 1822 Pückler was raised to the rank of prince .

Pückler reached Meroe in Sudan in May 1837 and had his name engraved on the pyramids there, as well as on the temples of nearby Musawwarat 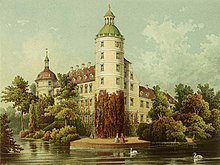 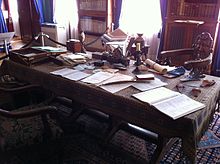 Prince Pückler's desk in the library of Branitz Castle

Hermann von Pückler-Muskau was the first of five children of Count Ludwig Carl Hans Erdmann von Pückler (1754-1811) and Countess Clementine von Callenberg (1770-1850), who gave birth to him at the age of 15. Pückler grew up with three sisters in the Muskau Free Class , the largest of the four Upper Lusatian Free Classes. His brother died of dysentery in childhood . His grandfather Georg Alexander Heinrich Herrmann von Callenberg lived in the house.

His mother, as he put it in a letter to his father when he was 16, treated him like a toy “without even knowing why she was soon beating me, now caressing me.” Father Erdmann Graf Pückler was considered sullen and withdrawn. In the same letter, Pückler described his upbringing: “In the early years of my childhood I found myself in the hands of partly stupid, partly rough servants, who treated me pretty much as they please.” Only his grandfather, Count von Callenberg, and his tutor Andreas Tamm liked the young one Earl, Tamm, however, was forced to walk early. His successor was Friedrich Brescius , who was only allowed to teach him for a short time. After the death of his mother's father in 1795, the nine-year-old was sent to the Herrnhutern in Uhyst for four years , then to the pedagogy in Halle and finally to the Philanthropinum in Dessau . The strict pietistic upbringing at the “man's hat hypocritical institution” (Pückler) in Uhyst justified his later aversion to Protestantism . When he expressed himself religiously, a decided pantheism emerged. In old age he converted to the Roman Catholic Church .

In 1800 he enrolled to study law at the University of Leipzig , but broke it off early and began a military career (1802-1806 lieutenant in the Saxon Guard du Corps in Dresden ). He eventually went on extensive trips - often on foot - to Provence and Italy . After his father's death in 1811, he soon handed the administration of Muskau over to his friend, the poet Leopold Schefer . As a lieutenant colonel and adjutant general of the Duke (since 1815 Grand Duke) Karl-August von Sachsen-Weimar-Eisenach , he took part in the Battle of Leipzig . In the following campaigns against Napoleon he acted as a liaison officer to the Russian Tsar Alexander I and was then briefly appointed military governor of Bruges .

In 1812 he traveled to England for the first time with Leopold Schefer , where he discovered his calling as a horticultural artist in view of the parks there. After the Congress of Vienna in 1815, Pückler's part of Lusatia fell from Saxony to Prussia . According to historians' estimates, Pückler was one of the fifteen largest landowners in the Kingdom of Prussia.

On October 9, 1817, he married Lucie von Hardenberg (1776-1854), nine years his senior , divorced von Pappenheim , daughter of the Prussian State Chancellor Karl August von Hardenberg . In 1822, Pückler was elevated to the status of a prince, although in contrast to the Silesian Free Classes of Oels, Trachenberg, Carolath and Pless, the Free Classes of Muskau were not recognized as a principality. In 1826 he divorced Lucie pro forma , with whom he remained lifelong friendly regardless. Lucie fulfilled the role of a mother for him, because he was sexually oriented towards underage girls.

The indebted park and garden designer wanted to travel to England to get married again rich. Pückler spent many months there between 1825 and 1829 in search of a wealthy heiress. He admired the lifestyle of the English landed gentry, which he regarded as the best element in English society. Nevertheless, in his letters to his wife Lucie, he sharply criticized the ruthless expulsion of the rural population in Ireland by English nobles who intensified sheep farming in Ireland. He did not find a bride, but his travelogues became a literary and financial success in Germany, then also in England and the USA. The prince therefore decided to travel to North America, but missed the ship's departure due to a duel .

Instead, he made a trip to Egypt via Algiers , where he was received as a state guest by the Khedive Muhammad Ali Pasha and was given a palace and staff for his stay. He continued to travel to Sudan until 1838, when he returned to the south of Khartoum, exhausted. In 1837 he bought Machbuba , about 12 years old , on the slave market in Cairo , who accompanied him on the further journey. He then took her back to Europe with him, but she only lived for a short time as his mistress in Muskau. The girl died on October 27, 1840 in his castle and was buried in Muskau. He also traveled to the Middle East - meeting Lady Hester Stanhope -, to Constantinople - he later tried unsuccessfully to become the Prussian ambassador there - and to Greece .

Politically, he represented liberal positions and was close to the Prussian reformers around Freiherr vom Stein . He advocated political self-government at the local level. This, along with his declared pantheism and his extravagant lifestyle, made him suspect in the reactionary Prussia of the Biedermeier era. On the other hand, however, Pückler, following the official German national line, actively participated in the Germanization of his predominantly Sorbian subjects and neglected popular education in his rule. He remained connected to the military - so he was given the character of a colonel in 1826 and as a major general in 1833 . Since 1862 he stood à la suite in the army and was appointed lieutenant general in 1863 . As such, he belonged to the headquarters of the Prussian king in the German-Austrian war in 1866 . However , the 85-year-old was denied participation in the Franco-Prussian War in 1870.

Since he had taken over financially with the creation of his first park in Muskau, he sold the Muskau registry in 1845. He moved to his hereditary castle in Branitz near Cottbus . He used the proceeds from the sale of Muskau to have the Branitz Castle rebuilt (under the strong influence of Gottfried Semper ) and to again create a landscape garden based on the English model, today's Fürst-Pückler-Park .

Prince Pückler was known beyond his military career as reckless and restless: in 1815 he ascended with a Reichard free balloon , in 1837 he traveled to the Nile Cataracts .

Until his death in 1871 he devoted himself to writing. He was the first German writer to use paper for carbon copies or a further development of Watt's press (which is in the museum holdings of the Fürst-Pückler-Museum Park and Branitz Castle).

Since cremation of the deceased was forbidden for religious reasons, he resorted to a provocative ruse and decreed that his heart should be dissolved in sulfuric acid and that his body should be bedded in caustic soda , caustic potash and caustic lime . He was buried on February 9, 1871 in the Tumulus - a lake pyramid in the park lake of the Branitz Castle Park. Since he was childless, the palace and park fell to his successor to the majorate, his nephew, Count Heinrich von Pückler , after his death , cash and inventory to his niece Marie von Pachelbl-Gehag, née. from Seydewitz. The literary estate of the prince was inherited by the writer Ludmilla Assing on the condition that she write the author's biography and publish his unprinted correspondence and diaries.

Among connoisseurs, he is considered a genius of landscape art , his further development of the "English park" in the landscape parks of Muskau ( Fürst-Pückler-Park Bad Muskau ) and Branitz is often even placed above Lenné and Sckell . Both parks and those of his students (especially Eduard Petzolds , 1815–91) made international schools as far as North America and are still among the special highlights of landscape design in 19th century Europe.

What made both parks particularly costly was the fact that Pückler had huge amounts of topsoil brought in from more distant areas on ox carts because the sandy subsoil was unsuitable for the planned vegetation. In addition, he succeeded for the first time in transplanting fully grown trees. He had them drive up on a special wagon and prepare the ground at the new location to be “tree-friendly”. In this way, he was able to implement his famous concept of the " visual axes " when designing the parks.

Pückler, who had only been granted and appreciated his options for visiting the English country house and access to the gardens in England in part, decided free access to his landscaped gardens and expanded this to everyone.

He was active as a narrator, reporter and letter writer. His literary fame among contemporaries is based on the anonymously published letters of a deceased . Originally, these were actually letters to his wife, and it was her idea to publish the letters in print. They quickly became bestsellers in Germany, England and France.

Their stylistic quality helped them to achieve this - keen-eyed access to speaking situations, intimidating sharp-tonguedness, especially with regard to one's own status, lack of prudishness, effortless irony. The bourgeoisie, ducked in the reaction time before 1848, gained insight into the aristocratic milieus that were shielded from them because they had access to the leading houses of Europe as a nobleman and let their readers participate in these experiences. As a dandy , he stood out from his peers. He also had an extensive circle of friends and acquaintances among artists and writers - for example Karl Friedrich Schinkel , Leopold Schefer , Bettina von Arnim , Rahel , Karl August Varnhagen von Ense and Heinrich Heine . In addition, he was familiar with numerous exotic countries and was able to keep up with Ottoman viceroys and Arab emirs on an equal footing. He knew exactly how to portray this suggestively and mockingly.

However, the original letters from Lucie von Pückler-Muskau and Leopold Schefer were edited in some bare-bones before going to press , so as not to impair the readers' ideas about him, which he later disliked according to his letters.

During his travels, Pückler also created “Memory Pictures”, a kind of diary in four unprinted volumes, which contains informative comments on English gardens and landscapes, but also on the culture and population, as well as some art prints and caricatures acquired on site. 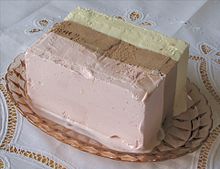 The continued effect of Hermann Pückler (the “green prince”) was helped by the fact that, as a multifaceted figure, he was very keen on public echo, which not least shaped the wealth of anecdotes about him, but also that he was upset by the opponents of young Germany Reputation as a Luftikus, womanizer or adventurer confirmed.

But its aftermath gradually suffered from the fact that in the field of landscape gardening as well as in the field of literary and local historiography and biography, very different groups of researchers worked successfully but without institutional networking on Pückler: landscape architects and horticulturists, literary historians, cultural historians, local researchers. Attempts to bring them all together and to include other disciplines are only recent.

The following landscape parks in Germany are connected with the work of Hermann von Pückler-Muskau :

Letter from (then still) Count Hermann from 1811

(Volumes 1 and 2 are actually volumes 3 and 4 in the inner chronological order, correspondingly volumes 3 and 4 are the first two. This edition was published twice, this time only by Hallberger; with a description of the English park of Warwick , the Edgar Allan Poes Park of Arnhem .)