After participating in the First World War, Rave, the son of a pharmacist, studied art history, classical archeology and literary history in Bonn from 1918 and received his doctorate in 1922 with a thesis on the church of St. Severus in Boppard and the Romanesque gallery building. On the recommendation of his teacher Paul Clemen , he came to the administration of the National Gallery in Berlin, where he was soon appointed curator and headed the Schinkel Museum .

Rave worked with the director of the Nationalgalerie at the time, Ludwig Justi, to build a collection of modern art for the Nationalgalerie . Justi was dismissed by the National Socialists in 1933 and replaced by Alois Schardt . After this too had fallen out of favor and his successor Eberhard Hanfstaengl had refused to collaborate in the confiscation of modern works of art for the exhibition “Degenerate Art” by the National Socialist art politicians Adolf Ziegler and Wolfgang Willrich , Rave took over the provisional management of the collection in the Kronprinzenpalais and in 1937 became director of the Nationalgalerie, whose modern collections he defended during the Nazi era. He retained this position after the war , but resigned in 1950 when the split in Berlin and thus also in the National Gallery had solidified. Until 1961 he was head of the art library in Berlin.

Rave's preferred field of work was the Prussian art of the decades around 1800. In particular, he devoted himself to Schinkel research and in 1939 he became the editor of the series Karl Friedrich Schinkel: Lebenswerk . In 1949 Rave's book Kunstdiktatur im Third Reich appeared , which critically deals with the National Socialist art policy, in particular the “Degenerate Art” campaign. 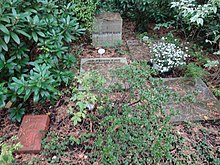 Paul Ortwin Rave died in Idar-Oberstein in 1962 at the age of 68. He found his final resting place in the Zehlendorf forest cemetery in Berlin. The grave was dedicated as a Berlin honor grave from 1992 to 2014 .