The title of this article is ambiguous. Further meanings are listed under Bettina von Arnim (disambiguation) . 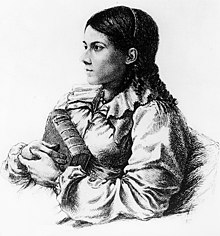 Bettina von Arnim around 1809, in an etching by Ludwig Emil Grimm

Bettina Brentano was the seventh of twelve children of the wholesale merchant Peter Anton Brentano and his second wife Maximiliane La Roche (daughter of the writer Sophie La Roche ). The noble family from Italy were wealthy. She owned the Haus zum Goldenen Kopf , later run by Bettina's brothers , the headquarters of a flourishing export and import company from which Bettina inherited a considerable inheritance. Bettina was called "the goblin" by her siblings early on, and the same thing happened later in Berlin society.

In 1793, Bettina's mother died. The daughter was therefore educated until she was 13 (1794–1796) in the Fritzlar Ursuline School (a monastery near Kassel). After her father's death, she lived with her grandmother Sophie La Roche in Offenbach am Main from 1797 , and later in Frankfurt am Main. Her sister Kunigunde Brentano was married to the legal scholar Friedrich Karl von Savigny and lived in Marburg , where Bettina lived with them for some time.

In 1804 friendship and correspondence began with Karoline von Günderrode (suicide in 1806 in Winkel am Rhein).

1806–1808 the folk song collection Des Knaben Wunderhorn was published by her brother Clemens Brentano and Achim von Arnim and their collaboration on Arnim's newspaper for hermits .

In 1807 (when she was 22 years old) she met Goethe for the first time in Weimar (recommended by Wieland as Sophie La Roche's granddaughter).

In 1810 she followed the Savignys to Berlin. On this trip she arrived in Vienna on May 8th and stayed with her sister-in-law Antonie Brentano , who introduced her to Ludwig van Beethoven at the end of May . If you follow her own letters and memories, she only met Beethoven three times before she left the city on June 3rd and traveled on to Prague with the Savigny family . However, this encounter shaped them significantly. In 1811 Bettina Brentano married Achim von Arnim , whom she had already met in Frankfurt as a friend and literary work colleague of her brother Clemens Brentano . The Arnims were married for twenty years until his sudden death in 1831. The couple lived mostly separately - while Bettina lived in Berlin, Achim managed the Wiepersdorf estate .

The marriage had seven children:

In 1824 she designed a Goethe monument, the drawing of which she presented to him and the model of which was brought to Weimar - the monument was executed by the sculptor Karl Steinhäuser, and in 1855 it was erected in Weimar.

Bettina von Arnim's literary and social engagement only came into the public eye after the death of her husband in 1831, whose works she published. The new autonomy made possible by the widowhood led to a strengthening of their public work. She became the editor of his "Collected Works". During the cholera epidemic in Berlin, she got involved in social aid measures in the slums and cared for the sick. On the occasion of the accession to the throne of the Prussian King Friedrich Wilhelm IV. In 1843 she published the social report This book belongs to the king . The work, consisting of fictional dialogues between Goethe's mother and the mother of the Prussian king, was banned in Bavaria .

The later art and cultural historian Jacob Burckhardt (1818–1897) studied in Berlin from 1841–1843, was received by Bettina von Arnim and described her in a letter to his sister Louise on January 29, 1842 as follows: “A 54-year-old mother, small but of a beautiful posture, with real gipsy features in the face, but as wonderfully interesting as a female head seldom; beautiful, real auburn curls, the brownest, most wondrous eyes that have ever occurred to me. "

In the disillusionment that followed the failed revolution of 1848 , she wrote the sequel Conversations with Demons in 1852 , in which she advocates the abolition of the death penalty and political equality between women and Jews . Her extensive correspondence to determine statistical information for her poor book caused a sensation. The book was banned by the Prussian censors even before it was published , as Bettina von Arnim was suspected of having instigated the weavers' revolt .

Bettina von Arnim's grave next to the village church of Wiepersdorf

It was close to the ideas of the early socialists ; In 1842 she met Karl Marx , but stuck to the idea of ​​a people's king . The king should be the first citizen of a community of citizens and with them create the state in which they wanted to live.

In 1854 Bettina von Arnim suffered a stroke from which she did not recover.

On January 20, 1859, she died with her family, with the Goethe monument she made at her side. She was buried next to her husband at the church in Wiepersdorf . On her tombstone the year of birth is wrongly stated as 1788, in fact she was born in 1785.

It is depicted on the DM 5 note from the last Deutsche Mark banknote series that was published in 1992 .

The Bettinaschule in Frankfurt's Westend is named after Bettina von Arnim.

Bettina von Arnim was known for her numerous contacts with personalities from politics and culture: 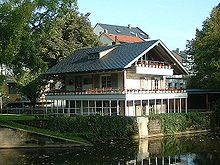 In 1806 Bettina Brentano's friendship with Goethe's mother Katharina Elisabeth Goethe began . At first the poet had not replied to Bettina's letters, which seemed to him enthusiastic. But a year later she was allowed to visit Johann Wolfgang Goethe , whom she greatly admired, for the first time in Weimar . An exchange of letters began between the two, which after Goethe's death became famous under the title Goethe's Correspondence with a Child . In 1811, the year she married, after a public argument between her and Goethe's wife Christiane, there was a break with Goethe. In a painting exhibition by Goethe's confidante Johann Heinrich Meyer , Bettina von Arnim had made derogatory comments about the works of “Kunschtmeyer”. Christiane then tore the glasses off her nose, and Bettina called Christiane an "insane blood sausage". From then on, Goethe banned Bettina von Arnim and her husband from his house. When he met the couple a year later in Bad Teplitz , he took no notice of them and wrote to his wife: "I am very happy that I have got rid of the madmen." Repeated letters in which Bettina desperately asked him to contact him again, he left unanswered.

Edward Walden believes in his book Beethoven's Immortal Beloved (2011) evidence of having found that Bettina von Arnim Beethoven's Immortal Beloved might have been - the addressee of that famous letter, the composer of 6-7. Wrote to a woman in Karlsbad in Teplitz in July 1812 . He is essentially based on two letters allegedly written by Beethoven to Bettina from the years 1810 and 1812, which, however, have long been exposed as Bettina's inventions. Walden himself admits: "If this letter to Bettina [from 1812] is genuine, it would be conclusively proven that Bettina was the Immortal Beloved , but the original is lost and its authenticity is strongly questioned nowadays." But even if this letter were if it were real, that would not change the fact that Bettina von Arnim - with her husband and sister Gunda - did not arrive in Teplitz until July 24, 1812, when Beethoven had written the letter from Berlin. She was not in Karlsbad at the time in question.

Bettina von Arnim published her correspondence with Johann Wolfgang von Goethe , Karoline von Günderrode , Clemens Brentano, Philipp von Nathusius and Friedrich Wilhelm IV. In some very heavily edited form. These letter books, which were composed according to the principles of romantic poetics, were often mistaken for authentic documents by readers, which led to allegations of forgery against Bettina von Arnim.

In particular, the book Goethe's correspondence with a child , published in 1835, was a sales success and had a strong influence on the image of Goethe in the years that followed, especially among the Romantics. The original letters were published in 1929. In the epistolary novel Die Günderode she processed the months of her friendship with Karoline von Günderrode in 1804 and her suicide.

Bettina von Arnim experienced and continues to experience very different assessments. Contemporaries described her as a "cricket-like, untreatable creature", as a goblin-like being. But you can also see her as an emancipated, gifted and curious woman who successfully campaigned for personal independence and intellectual freedom, for herself as well as for other people.

Christian Dietrich Grabbe wrote about Bettina's Goethe book: “The preface begins with the fact that the book is not for the bad, but for the good. Bettina, but the good guys will get angry, you've read the disgusting things. "

Ludwig Tieck wrote in 1835 in a letter about “Goethe's correspondence with a child”: “You cannot know as I do, how this fatal book is a single gross lie. In our times, nothing has made me so outraged as this writing. "

Bettina von Arnim's life and especially her relationship with Goethe are dealt with in great detail by Milan Kundera in his novel Immortality . Kundera sees Bettina as a woman who tried all her life to acquire her own fame through contact with outstanding personalities of her time and the suggestion of a deep emotional relationship with them. This interpretation is illustrated mainly by the analysis of her correspondence with Goethe, the changes she made in the publication and the public dispute with Christiane Goethe.

Sarah Kirsch draws a picture of her personal attitude towards life in the GDR in the 1970s in the Wiepersdorf cycle , which was created during a working week in the "[v] olkseigen castle". The general plot is the stay of a writer who is reminiscent of the author, in the "[e] honorable [n] beautiful [n] house [with] the double roof". In the second part, she depicts the Wiepersdorfer scenery “[t] he beautiful windows in the painting room”, “outside” “[m] aifrischer Park” with the “smiles [the]” “stone pictures” the narrowness of her high-rise apartment “in the hurtful square area ”and admiringly addresses the landlady:“ Bettina! Here you sat with seven children [...] I should write to the king ”. In the ninth part, the poet, alluding to Bettina's letters to Friedrich Wilhelm IV., Focuses on the similarities between the private and political situation: “Bettina, everything is the same. We are always alone when we write to the kings of the heart and to those of the state ”.

In Christa Wolf's novel No Place. Nowhere (1979) is Bettina von Arnim part of the Winkeler Gesellschaft, in which Heinrich von Kleist's (fictional) encounter with Karoline von Günderrode takes place in 1804 .

Bettina von Arnim is the female protagonist in The Erlkönig Maneuver (2007) by Robert Löhr . The historical novel primarily depicts her conflict between her idol Goethe and her husband Achim von Arnim. 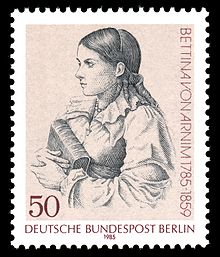 Berlin special stamp (1985) for the 200th birthday, after an etching by Ludwig Emil Grimm

On this hill I overlook my world!
Down into the valley, gently accompanied by a lawn, crisscrossed
by the path that leads across,
the white house set up in the middle,
what is it that makes sense here?

On this hill I overlook my world!
I also climbed the steepest heights of the countries,
From where I can see the ships go,
And cities far and near by mountains proudly surrounds,
There is nothing that keeps my gaze captivated.

On this hill I overlook my world!
And can I look over paradises,
I longed to go back to those meadows,
Where your pinnacle of your roof confronts my gaze,
For that alone delimits my world.