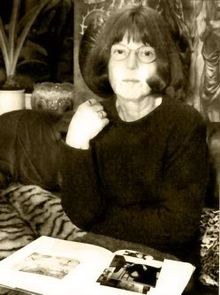 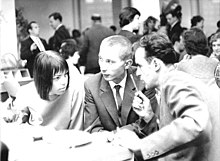 Sarah Kirsch was born in the parsonage in Limlingerode as Ingrid Hella Irmelinde Bernstein; her grandfather Paul Bernstein baptized his granddaughter on May 19, 1935 in his church next door. She spent her childhood and youth in Halberstadt from 1937/38 . Her father was a telecommunications mechanic. Her strong interest in nature was expressed, among other things, in the fact that she began an apprenticeship in forestry after graduating from high school, which she soon broke off. From 1954 to 1958 she studied biology in Halle (Saale) and obtained the title of diploma biologist. In 1958 she met the poet Rainer Kirsch , with whom she was married from 1960 to 1968.

On the occasion of the 25th anniversary of the Academy, Günther Deicke , Volker Braun , Sarah Kirsch, Wieland Herzfelde , Franz Fühmann and Stephan Hermlin (from left to right) read . Günther Rücker (5th from left) was in charge of the discussion .

From 1960 she published lyrical texts in anthologies and magazines under the first name pseudonym Sarah , which she had chosen in protest against the annihilation of the Jews in the Third Reich . From 1963 to 1965 she studied with her husband at the Johannes R. Becher Literature Institute in Leipzig . From 1965 both lived as freelance writers in Halle (Saale) and Sarah Kirsch became a member of the GDR Writers' Association . In 1965 she and her husband published the volume of poetry Talk with the Saurian , for which they both received the Erich Weinert Medal , the FDJ's art prize . Two years later, in 1967, she published her first volume of poetry under the title Land Stay .

After her divorce from Rainer Kirsch in 1968, she moved to East Berlin , where she gave birth to her son Moritz in 1969 from a brief relationship with Karl Mickel . There she worked as a journalist, radio operator and translator. In 1973 she published the poetry volume Zaubersprüche as well as the prose volumes The Panther Woman and The Unbelievable Mountain Waves at Sea . In the same year she became a board member of the GDR Writers' Association. In West Germany, a first selection of poems was published by Langewiesche-Brandt in 1969 , followed by another in 1974 under the title It was this strange summer as a bibliophile edition of the Berlin hand press. As the first to sign the declaration of protest against Wolf Biermann's expatriation , she was expelled from the SED and the GDR Writers' Association in 1976 . The following year, 1977, Sarah Kirsch received permission to move to West Berlin with her son .

In 1978 she became a member of the PEN Center of the Federal Republic of Germany and received a scholarship from Villa Massimo in Rome, where she met Wolfgang von Schweinitz , with whom she lived in the following years. In 1980, Sarah Kirsch, together with Günter Grass , Thomas Brasch and Peter Schneider, wrote an open letter to Federal Chancellor Helmut Schmidt , in which they called for a critical attitude towards American foreign policy. In 1992 she declined an appointment at the Berlin Academy of the Arts , as it offered shelter to former employees of the State Security . In 1996 she took over the Brothers Grimm Professorship at the University of Kassel and was also a guest lecturer at the Johann Wolfgang Goethe University in Frankfurt am Main in 1996/97 . After moving from West Berlin, the poet lived with her son Moritz from 1981 to May 1983 in Bothel , Rotenburg district. It was there that she created her collection of poems, Katzenleben , published in 1984.

Kirsch's estate is in the German Literature Archive in Marbach . Parts of it can be seen in the permanent exhibition of the Modern Literature Museum in Marbach.

Sarah Kirsch is considered one of the most important German poets. Her poetry is open in form, mostly without rhyme and in free meter. Nevertheless, the rhythm in the sense of the breathing rate plays a major role, as does line breaks and line leaps that create a flow or breathlessness. Kirsch often combines technical or old-fashioned expressions with a casual tone.

Her metaphor is characterized by images that take their starting point from everyday, nature or landscape contemplation, but are alienated or experience a surprising twist. Sarah Kirsch often contrasts precise observation of nature with the emotional life of the lyrical self or political reflection. While the discussion of war and National Socialism predominated in early poems, later the landscape poem and reflections on the world crisis of civilization dominate. Kirsch does not belong to any school, but is sometimes assigned to the New Subjectivity . Kirsch named Annette von Droste-Hülshoff as a literary role model , and her work is also influenced by Johannes Bobrowski and Wladimir Majakowski . The publication of the long-standing correspondence between Sarah Kirsch and Christa Wolf caused a sensation, in which both writers openly examine professional and private topics beyond everyday GDR life.

In Sommerstück , Christa Wolf tells - like Sarah Kirsch in Chronik Allerlei-Rauh  - of a summer vacation in Mecklenburg in the 1970s, together with friends who renovated old farmhouses. Although reference is made to the fictional character of the summer piece [s] , z. B. "Bella" clearly recognizable as Sarah Kirsch in Wolf's characterization and assessment.

Bella lives with her little son Jonas with a friend and there cultivates her hatred of the unfaithful lover (reference to The Meropsvogel ), who prevents her from writing because he has not sent a sign from France for weeks while she tears up her letters to him again and scatters the snippets in the wind. In a conversation, she suddenly announces her departure, which some have already suspected. (One day I'll jump out of there.) In this context, in contrast to the milder perception and self-perception of the All-Rough- Me narrator, the time of upheaval with the impending tensions that overshadow the holiday atmosphere is noticeable: in 1976, both writers will end excluded from their association after they signed an open letter against Wolf Biermann's expatriation .

Christa Wolf reacts differently to Kirsch and reflects this self-critically in Sommerstück : “Something would change, today we all say we knew it couldn't stay that way. [...] The scream that sat in our throats was not uttered. We have not come out of our skin ”.

Sommerstück begins with two quotes from Kirsch: The first sentence is the heading of the poem It was this strange summer . A second poem, the motif of which is taken up in the course of the plot as a bird of prey circling over the group of friends, precedes the story: The air is a bird of prey So I never circled over people and trees [...] and fly away through the summer!

In 1998, in her hometown Limlingerode, today part of Hohenstein , the support association “Dichterstätte Sarah Kirsch e. V. ”, which since 2000 has reconstructed Kirsch's birthplace, the former parsonage next to the church , with funds from the State of Thuringia , the German Monument Foundation Bonn and the Monument Association Thuringia and opened in 2002 as“ Sarah Kirsch's poet's place ”. Sarah Kirsch has attended readings several times since 1997.