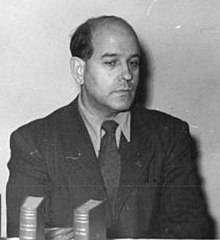 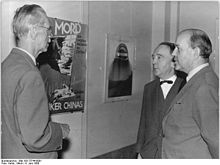 Wieland Herzfelde, right, in 1960 in conversation with Otto Nagel , left, and his brother John Heartfield about one of his photomontages.

Wieland Herzfelde (actually Herzfeld ; born April 11, 1896 in Weggis , Switzerland ; † November 23, 1988 in East Berlin ) was a German publicist , author and publisher . In 1916 he founded the Malik publishing house , which specialized in avant-garde art and communist literature. 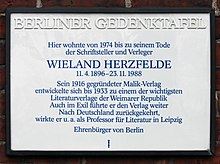 Wieland Herzfeld was born the third of four children of the writer Franz Held (actually Herzfeld) and his wife Alice Stolzenberg. He followed his older brother Helmut Herzfeld to Berlin in 1914, where he studied German and medicine . Since his youth he had a desire to become a writer and wrote his first poems at a young age. Since March 1914 he published his work under the name Wieland Herzfelde with an "e" appended, as he was called by Else Lasker-Schüler . His artistic plans were interrupted in 1914; Herzfelde went to the First World War as a volunteer . The experiences at the front shocked him and in 1916 he and his brother decided to publish a magazine against the war. The first edition of Neue Jugend appeared in the same year and was banned by the government the following year.

The Malik-Verlag emerged from the project Neue Jugend in 1917 , initially specializing in the publication of politically explosive magazines (including Die Pleite , Der gegen ) and art portfolios by George Grosz . In the same year Herzfelde was discharged from the army. His brother Helmut Herzfeld, who now called himself John Heartfield , was a co-founder of the publishing house and responsible for the extravagant design of the publications. Gradually the company changed from a magazine to a book publisher, became the mouthpiece of Dadaism and supported the Soviet Union with its publications .

Herzfelde maintained personal contacts with many Berlin artists, including Harry Graf Kessler , Else Lasker-Schüler and Erwin Piscator , who offered him financial and moral help in his work. On December 31, 1918, the day the Communist Party of Germany (KPD) was founded, Herzfelde, Grosz and Heartfield joined the association. Harry Graf Kessler noted in his diary about Wieland Herzfeld's political positions and assessments: “He openly claims to be a communist and supporter of the Spartakusbund . He says not for sentimental ethical reasons like Liebknecht, but because communism is more economical than our current mode of production and is necessary for the impoverishment of Europe. He also considers terror to be necessary, because human nature is not good in itself and therefore coercion is necessary. However, it doesn't have to be bloody terror; he had a form of boycott as terror in mind. The Spartacus uprising was not somehow prepared and organized in an amateurish way. The talk of Russian organization and Russian money is nonsense. The uprising broke out against the will and the expectations of the leaders. "

In the 1920s the publishing house was expanded to include an art gallery, the Grosz Gallery, and a bookstore. In April 1921, Herzfelde and Grosz had to appear in court. It was about a lawsuit for insulting the Reichswehr , which the Reichswehr Ministry had initiated . The occasion was exhibits from the First International Dada Fair in 1920: Grosz's portfolio God with Us and the stuffed soldier with the pig's head, designed by Schlichter and Heartfield. The court imposed fines of 300 marks against Grosz and 600 marks against his publisher Wieland Herzfelde.

When Hitler came to power, it became impossible to publish left-wing books. Herzfelde hid with friends from the Gestapo and finally found refuge with Ernst Rowohlt . In 1933 he fled to Prague, where he resumed publishing. After the official closure of the Malik publishing house in Berlin in 1934 by the National Socialists , Herzfelde relocated the company headquarters to London for legal reasons, but continued to manage the publishing house from Prague. Here he began to publish works by Johannes R. Becher and Ilja Ehrenburg, among others, and together with Anna Seghers to publish the magazine Neue Deutsche Blätter , which was directed against the “brown culture” in Germany. During this time, Bertolt Brecht's “Collected Works” was published . On November 3, 1934, the Deutsche Reichsanzeiger published the third expatriation list of the German Reich through which he was expatriated .

He and his brother fled to London in 1938, received a visa for the USA in 1939 and finally emigrated to New York. Here began the hardest time for Herzfelde and his family, as they had to start a new life without any financial reserves or friendly financiers. Five years after his arrival in America, he was able to realize his wish to found a publishing house for German exiled authors. He founded the anti-fascist Aurora publishing house together with Bertolt Brecht, Lion Feuchtwanger , Alfred Döblin , Heinrich Mann , Ernst Bloch , Ferdinand Bruckner , Oskar Maria Graf , Berthold Viertel , Ernst Waldinger and F. C. Weiskopf in 1944. This had to be closed again two years later because Herzfelde was heavily in debt. In New York he was a participant in the Oskar Maria Graf regulars' table .

Herzfelde returned to Germany in 1949 and became professor of literature at the University of Leipzig (first for “Sociology of Modern World Literature” at the Faculty of Social Sciences; then for “Literature and Art Criticism” at the Philosophical Faculty). He wrote poems, stories, essays and worked as a translator. After John Heartfield's return in 1950, he created sets and book sets. From 1954 to 1961 Herzfelde was professor of sociology of modern literature at the Faculty of Journalism.

Wieland Herzfelde continued to campaign for the principles of socialism, but received little support or recognition as a publisher in the GDR . Like many comrades who sought refuge in Western Europe or the USA during fascism, he was temporarily excluded from the party. In the years 1952 to 1962 he devoted himself entirely to the publication of the 14-volume “Collected Works” by Leo N. Tolstoy . 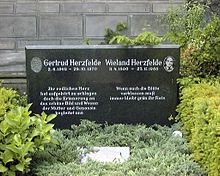 Grave of Wieland Herzfelde in the Dorotheenstädtischer Friedhof in Berlin, here still with the old tombstone designed by Herzfelde himself

In 1968 his brother John Heartfield died. In the same year the Deutsche Akademie der Künste organized the exhibition “Der Malik-Verlag”, whereby the reprint of the Neue Jugend was followed by a series of reprints of all Malik magazines and selected books. In West Germany, too, the publisher's work was honored through several exhibitions. He died on November 23, 1988 in Berlin. The grave, as the honor grave of the city of Berlin in the Dorotheenstädtischer Friedhof , is in the department CH. On November 23, 1995 , a Berlin memorial plaque was attached to his former home, Berlin-Weißensee , Woelckpromenade 5 .

Herzfeld's name was the Wieland-Herzfelde-Oberschule (or grammar school) in Berlin-Weißensee . After it was merged with the Bühring Oberschule in 2006, it was renamed Primo Levi Gymnasium in 2007 .