From 1953 to 1954, Winkler took painting and drawing lessons from Jürgen Böttcher (artist name Strawalde ) and became a member of the artist group Erste Phalanx Nedserd . The group strived for artistic work without compromise. For this reason, the members of the artist group were not allowed to study at the academy: from 1956 he applied four times without success to the Dresden University of Fine Arts and the Berlin (East) University of Fine Arts . Members of the artist group were also denied membership in the Association of Visual Artists of the GDR . They therefore had to earn a living as workers or craftsmen. From 1955 to 1956 Winkler was an apprentice draftsman at DEWAG . After dropping out of his apprenticeship, he worked as a stoker, night watchman, postman and small actor , including in the film Year 45 by Jürgen Böttcher, who had already included him in his banned short documentary Three of Many in 1961 .

In 1966 Winkler became a candidate for the Association of Visual Artists, now under the pseudonym AR Penck , which was chosen after the geologist and Ice Age researcher Albrecht Penck . Since 1969 he had increasing problems with the Ministry for State Security of the GDR : Penck's pictures were confiscated, his membership in the " Association of Visual Artists of the GDR " (VBK) was rejected.

In May 1971, Winkler founded the artist group Lücke together with Steffen Terk , Wolfgang Opitz and Harald Gallasch , which existed until 1976. From 1973 he worked under the pseudonym Mike Hammer and TM (also contracted: TM ). After military service in 1974 and above all the award of the Will Grohmann Prize in 1975 by the Academy of the Arts in West Berlin, the state security controls increased. In 1976 Penck met his West German painter colleague Jörg Immendorff , with whom he worked in the following years. In their work they campaigned for the abolition of the German-German border as well as for dissidents , among them Rudolf Bahro and Robert Havemann . From 1977 the customs confiscated Winkler's paintings - who from 1976 also signed a Y.

In May 1979, when Winkler's studio was broken into, various works and records were destroyed. On August 3, 1980, he was expatriated and moved to the West. He initially lived in Kerpen near Cologne. In 1981 the Goethe Foundation in Basel awarded him the Rembrandt Prize. In 1983 Winkler moved to London and in 1985 was awarded the Aachen Art Prize. In 1984 he was represented at the exhibition From Here - Two Months of New German Art in Düsseldorf . In 1988 he took part in the exhibition Made in Cologne , in the same year he was appointed professor of painting at the Düsseldorf Art Academy . After his retirement in 2003, Winkler lived and worked in Dublin , Ireland.

The autodidact created "worlds" and "experience spaces", filled with symbolic abbreviations. In his pictures he used stick figures and graphic symbols that are reminiscent of cave paintings , Asian calligraphy and graffiti . This is how his standard pictures were created in the 1970s . Under this term, Penck understood an art movement that uses such simple, archaic symbols that any viewer can penetrate the resulting images - such as traffic signs or trademarks . In 1995, his 2.5 ton bronze sculpture Standart T (x) , which is 6.4 meters high, was erected on the roof of the Penck Hotel in Dresden .

Penck took part in Documenta 5 in Kassel in 1972 in the Individual Mythologies department and was also represented as an artist at Documenta 7 (1982) and Documenta IX in 1992. For Documenta 6 (1977), pictures of him were planned, the exhibition of which was prevented by the influence of an unofficial employee of the State Security of the GDR on a Hessian parliamentarian.

Penck was counted among the " new wild animals " in the 1980s . During this time he also appeared as a drummer and keyboardist in the group Triple Trip Touch (aka TTT or TTT ), which he founded together with Frank Wollny - frequent joint appearances with Frank Wright , Frank Lowe , Jeanne Lee , Alan Silva , Peter Kowald , Helge Leiberg , Clarence Sharpe and Louis Moholo followed.

For the French winery Château Siran , one of the nine wineries in the Crus Bourgeois Exceptionnels classification , he designed the label for the 1989 vintage, the year in which the Berlin Wall fell. In 1991 he designed a BMW Z1 as a BMW Art Car for BMW .

On November 12, 2005, the sculpture Die himmlischen Stürzer (a five-part marble ensemble), which Penck had created in collaboration with Frank Breidenbruch and whose value was probably several hundred thousand euros, was damaged by the ghost ride of a driverless excavator. The sculpture was inaugurated on November 13, 1996 in Wuppertal .

Penck was never fixated on painting alone. He wrote poems, essays and theoretical texts. He also appeared as a jazz musician (vocals, drums, double bass, guitar, flute and piano) and published recordings on which he provided his own cover motifs. 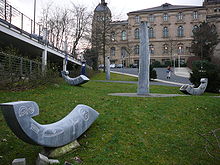