The title of this article is ambiguous. Further meanings are listed under Kerpen (disambiguation) .

To the east of the city center of Kerpen, the Erft (coming from the Eifel) runs with the Erftauen and divides the community, further east is the Ville . The Neffelbach runs from Nörvenich coming to the northeast and is still flowing to Kerpener municipality in the Erft. To the south of Kerpen, isolated foothills of the northern Eifel still protrude into the lowlands. Kerpen is also in the Jülich-Zülpicher Börde .

The districts are listed with their population figures from 2018. In some cases, there are still hamlets added to the districts.

The urban average in 2014 only 47% (2011: 49%) of the population believed that they were Roman Catholic and 15.4% (2011: 16%) believed that they were Protestant. 37.6% of the population were statistically recorded as persons without information on their denominations (if available) (2011: 35%). The proportionally most “Catholic” districts in the urban area are Manheim (13.8% above the urban average), Buir (+ 11.8%), Mödrath (+ 11%) and Blatzheim (+ 10.7%). The Catholic population is the least represented in the large districts of Sindorf (6.4% below the total city share), Kerpen (−2.8%) and Horrem (−2.2%). The Protestant population is proportionally most strongly represented in Neu-Bottenbroich, Horrem and Buir. For the first time in 2014 in Sindorf, and thus also for the first time in a district of the Kolping City, the Catholic population was no longer the largest population group: 43.9% of Sindorf residents are now listed in the population statistics as people without information on their denomination - this group is thus 3.3 percent larger in Sindorf than the Catholic population group.

Kerpen was first mentioned in a document in 871 under the name "Kerpinna". After the Battle of Worringen in 1288, Kerpen became a Brabant enclave in the middle of the area ruled by the Electorate of Cologne and the County of Jülich , which helped Kerpen to become truly independent. The Duchy of Burgundy took over the Brabant inheritance, which passed to the House of Habsburg after the death of Charles the Bold in 1477 . When King Charles V divided the empire among his sons in 1522, Kerpen and the Netherlands fell to the King of Spain . Kerpen remained Spanish until the Peace of Utrecht in 1712 - in the 1970s the now defunct inn “King of Spain” in today's Stiftsstraße reminded of it.

Kerpen then became an independent imperial county under the Count of Schaesberg with the Lommersum that was lordly connected to him . With the seizure of the Left Bank of the Rhine by French revolutionary troops , Kerpen lost its independence in 1794, but became the seat of the canton in 1798. The Mairien Blatzheim, Buir, Kerpen, Sindorf and Türnich belonged to this canton . The canton of Kerpen was assigned to the arrondissement of Cologne in the Rur department . In 1815, after the Congress of Vienna , Kerpen became part of the Prussian Rhine Province in the Bergheim (Erft) district . Kerpen received city ​​rights in 1941 .

Today's Kerpen was created on January 1, 1975 from the then city of Kerpen and seven previously independent municipalities as part of a municipal reform through the Cologne Act of 1974. Most of the city districts are still separated from one another by large open spaces and have therefore retained a certain degree of independence.

The Manheim district will give way to the Hambach opencast mine by around 2022 . In a vote, the residents chose Kerpen-Dickbusch as the resettlement site. The new Dickbusch location has been under construction since spring 2012. Since 2016, residents who have moved in can also purchase a plot of land.

The partnership with Oświęcim / Auschwitz emerged in 1993 from the relationships between the respective secondary schools, which were established after Poland opened to the West in 1991.

Coat of arms, banner and flag

As a banner: "Gold (yellow) -red-gold (yellow) in a ratio of 1: 4: 1, striped lengthways with the city's coat of arms shifted upwards over the middle."

As a hoist flag: "Gold (yellow) -red-gold (yellow) in a ratio of 1: 4: 1, striped lengthways with the heraldic shield shifted to the pole."

Collegiate Church of St. Martin in the center of Kerpen

See also : List of museums in the Rhein-Erft district 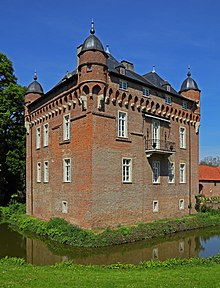 Kerpen lies with the nature reserves Kerpener Bruch / Parrig and Dickbusch, Lörsfelder Busch, Steinheide in the Rhineland Nature Park . The new information center for the northern part of the nature park, the Gymnicher Mühle on the Erft, is on the other side of the border with Gymnich . For a few years now, the recultivation area of the former open-cast lignite mine in Frechen has also become a natural landscape with several lakes, etc.; it has been since the Pope's visit to the XX. World Youth Day in 2005 known as Marienfeld. The largest lake here is the Boisdorfer See .

The Erftlandring kart track in Manheim is known beyond the local borders as Michael Schumacher's house track . The Flinke Flitzer soap box club has existed for young racing enthusiasts since 1977 . Since it was founded in 1977 to 2008, the club has already won a second and a third place at the German championships. The four-season pool Erftlagune in Sindorf and the Türnich outdoor pool are places for water sports. A mini golf course is operated in Türnich .

Kerpen has been able to call itself a bicycle-friendly city since 2012 .

Kerpen and its districts are still characterized by the lignite industry in the vicinity of the Rhenish lignite mining area with opencast mines and briquette factories. The Frechen opencast mine in the east is charred - there is a recultivation area with the Marienfeld known from the 2005 World Youth Day - (smaller fields such as the Louise mine near Brüggen / Türnich with briquette factories I and II were already exhausted in 1952), the new Hambach opencast mine moves closer to the district of Manheim. The only reminder of the Sindorfer Glashütte from 1911 to 1978 is Hüttenstrasse with its former company apartments . The lignite power stations on the Villerücken are not far and also offer Kerpeners work. The car accessories company Visteon has its European headquarters with approx. 770 employees in Sindorf. European significance and the NATO - military airbase Nörvenich . The air force soldiers stationed there are housed in the Kerpen Boelcke barracks and in the Nörvenich barracks Haus Hardt . As announced on October 26, 2011, the Boelcke barracks in Kerpen was closed in 2015. By 2017 [obsolete] the number of 980 soldiers employed at the air base is to increase to 1,110 in 2011. In addition, the cable network operator Unitymedia has its technical center in Sindorf. In addition to the German headquarters of the IT system service provider Computacenter with 4,700 employees in Germany, the company Boll & Kirch Filterbau with its approx. 600 employees is one of the largest employers in Sindorf. The retail trade in Kerpen is also not to be underestimated. Through the creation of the EKK (Erft-Karree-Kerpen) in Kerpen with its large chain stores OBI, SATURN, Staples, Roller and Intersport, as well as many smaller trading companies, Sindorf also has the "Modepark" with companies such as Modepark Röther , C&A , Woolworth , KiK u. v. m. an important shopping center was built, which also attracts many customers from neighboring cities.

The converted Sindorf S-Bahn station on the Cologne – Aachen line

Kerpen is located at the motorway junction ( Kreuz Kerpen ) of federal motorways 4 and 61 .

The federal highways 264 and 477 cross in Blatzheim . The districts are developed internally and with the neighboring communities by bus routes operated by the Rhein-Erft-Verkehrsgesellschaft in the Verkehrsverbund Rhein-Sieg (VRS), which are supplemented by a collective taxi system. There are a total of three motorway exits in the city and three very close by in the immediate vicinity. The Aachener Straße from Cologne ends directly between Kerpen-Sindorf and Bergheim-Ahe.

In Horrem station , the largest station in the city, at the junction of the Cologne – Aachen – Brussels line , the Erftbahn branches off to Bedburg via Bergheim. In addition to regional trains, there is also the S-Bahn , which runs the Cologne – Düren section.

The first CO 2 -free train station in Germany has been in Horrem since mid-2014 . Since the old station building was dilapidated and no longer up-to-date, the “green” station was built in Horrem. The building has a photovoltaic system with an annual output of 31,000 kilowatt hours. Energy for heating and cooling is generated by means of geothermal energy and solar thermal energy is used to heat water . The public toilets are supplied with water from the rainwater collected on the green roof . The combination of LED lighting and daylight in conjunction with the other measures ensures that this station does not produce any CO 2 . A pilot project that will certainly also be used in other cities in the future.

Today's city of Kerpen has a total of three train stations; Buir, Horrem and Sindorf. The city ​​center of Kerpen no longer has a rail connection. In 1913 the Bergheimer Kreisbahn was nationalized. In the 1950s, parts of the line (especially the Mödrath station) had to give way to an open-cast mine. The line was gradually dismantled in the 1960s.

The city is connected to several cycle routes:

Kerpen has two cinemas, which are also used for cultural events and meetings of the clubs: the traditional Capitol from the 1950s, modernized, with two halls and the Euromax with five halls.

There are several telephone prefixes in Kerpen:

Cities in the Rhein-Erft district