The title of this article is ambiguous. For the English term for the free speech see Soapbox

Soap boxes are small four-wheeled vehicles that you have constructed yourself from wood , plywood , GRP , CFRP or similar materials or are assembled from prefabricated kits. They have no drive and are moved on sloping stretches solely by the downhill force . The steering of the soap boxes acts with steering ropes or another steering device on the front rigid axle , which is pivoted as a whole ( turntable steering ). Soap boxes can go up to 50 km / h, the racing rules of the DSKD say that in Germany the speed of 60 km / h must not be exceeded at any point in the race.

Since 1904, races for children have been held in Germany with self-made “children's automobiles”. Oberursel near Frankfurt am Main is considered the birthplace of the children's car races in Germany. In 1904 and 1907 several such races took place in the Taunus , which were inspired by the major events of the Gordon Bennett Cup in 1904 and the Kaiserpreis race of 1907. The participants, almost exclusively boys or their fathers and relatives, tried to reproduce the racing cars as true to life as possible in miniature form.

The soapbox sport later developed completely independently of these early races. The name Soapbox ( English : soap box ) comes from the USA and was designed by the US newspaper photographers Myron E. Scott coined by the Daily News in Dayton, Ohio, when he photographed adolescents in 1933 when tinkering of children automobiles. To do this, they used wooden packaging boxes in which companies delivered soap and cheese to retailers, but also discarded prams, tin tubs and the like. Scott called the small vehicles “soap boxes” in his reports. The first larger "Soap Box Derby", ie soap box race, took place on March 19, 1933 in Dayton with 362 registered little drivers, including a few girls. From 1935 until today, the US and World Championships will be held in Akron , Ohio. The decisive factor for choosing this location was that the city administration made a permanent race track available to the race organizers. The main sponsor until 1972 was the company Chevrolet , which belongs to the General Motors group. In Germany, General Motors subsidiary Adam Opel AG was the main sponsor and organizer until 1972 .

It was not until after the Second World War that the American soap box sport came to Germany. The first major soapbox races of the post-war period took place there in 1949. The starting point was the efforts of the US troops stationed in Germany to organize recreational activities that would serve the youth. The Soap Box Derbies, which were in full bloom in the USA at the time, were the model for the German soap box races.

Proud figures were already reported in the first ten years. 60,000 German boys drove soapboxes, 214 cities were involved. In 1949, i.e. in the first year of the organized combination of soap box races with a final championship, 12 major events were organized in various cities in the then US occupation zone in Germany and in Berlin.

The championship race took place in Munich on Theresien-Wiese , on a wooden track of 220 m length, with the start from a high ramp that swung up to the foot of the Bavaria monument. A year later, the championship was held in Stuttgart , on a road racing track in front of 20,000 spectators.

The year 1951 brought the big boom. Opel had established an organizational center in Rüsselsheim and, through its activities, expanded the soapbox derby to cover the whole of Germany. In 1951 there were also uniform wheel sets for the first time, and Adam Opel AG, as patron and creator of the German Championship, called for the competition for the grand Opel Prize . This gave all soapbox racing drivers a special incentive to work and participate. Training grants and a 14-day trip to the USA for the first winner, including participation in the world championship in the soapbox race in Akron , were announced as part of the grand Opel Prize . In addition, 20 participants were allowed to drive through Germany through the most beautiful regions of their homeland for 18 days.

On this basis, the races took place across Germany in front of a large crowd and with enthusiastic participation. Many clubs, especially ADAC groups, made their employees available, and newspaper publishers also helped.

In 1952 new organizers were added; the ADAC took on the races nationwide. The national championship was held for the first time this year, as in all subsequent years, in the Duisburg city ​​forest on Uhlenhorststraße. The cooperation of the organizational center at Opel in Rüsselsheim with the ADAC throughout Germany, the Opel dealers and the ADAC Presidium in Munich set a framework that was maintained for many years.

The federal championships in the German Soap Box Derby were the big events in the lives of boys and girls, here the championship of 1970 with Rudolf Breinl (3rd prize, Oberursel), Heinz Gerding, (1st prize, Haltern) and Karl-Heinz Hartrampf ( 2nd prize, Münsingen). Behind them, from the left, ADAC-Gau sports director Kurt Bosch, the general director of Adam Opel AG, Ralph Mason, and the mayor of the city of Duisburg, Arnold Masselter .

For organizers, i.e. motor sports clubs and Opel dealers, there was an almost 100-page manual in which all the details about the race track, soap boxes and the necessary and related advertising were suggested. Soap box races were competitions with a great local and nationwide response. Slide advertising, poster advertising, insertions, insurance, directing tasks, entry badges, circulars, invitations are keywords that outline the spectrum of organizations. There were six test centers - to check the axles, the brake cables, the steering wheels, the steering columns, the wheel angle and the track width. In the first five controls there were 36 items that were checked per soap box. The final inspection then took place in the sixth round.

Until 1972, Opel supplied the wheels and steering for the boxes and also provided the building description, which was based on the US model. This was necessary because the winner of the "German Soap Box Derby" should be able to compete in the All-American Soap Box Derby in the USA.

With the withdrawal of Adam Opel AG and subsequently also the ADAC from the soap box sport, the withdrawal of important local sponsors and, above all, the Opel dealer network, the importance of soap box sport in Germany declined sharply. In Germany, the German Soap Box Derby eV, based in the Moselle community of Klüsserath, organized the races.

Soap box race 2007 in the North Sea resort of Otterndorf

In Switzerland, an event from 1934 in Biberstein is known as the oldest soapbox race. The first regulations and guidelines for the construction of the soap boxes and the implementation of the races were issued in 1970 by General Motors Suisse SA and Rivella AG .

After General Motors withdrew in 1974, the races of the Swiss championship ran until mid-1990 under the patronage of Rivella.

Since the 1991 season, the LISTA Group, together with the AMAG Group, had assumed patronage. These patronage holders received ideal and financial support from the Swiss Touring Club and the Swiss Carrossier-VSCI Association. At the end of 1992 TCS and at the end of 1993 AMAG withdrew from soapbox racing.

From the 2003 season onwards, in addition to the two long-term main sponsors LISTA and VSCI, CASTROL was won as a further main sponsor. From the 2007 season this main sponsor has been replaced by the Motorex company .

In 1973 and 1974 the Salzburger Nachrichten held two races in Salzburg , back then on the Salzburgring .

From October 1977, the ÖAMTC organized soap box races and the soap box Grand Prix together with Wunderwelt for several years.

In 1996, from a private initiative, the Soap Box Club Austria (SKCÖ), based in Neumarkt am Wallersee , had organized more than 100 races by the end of 2009, in which 6,000 children and young people took part.

Nostalgic fun race in Oberursel (Taunus). The young women wear sailor suits based on the fashion of 1904.

The Austrian umbrella association for soap box racing has existed since 2007.

Since General Motors withdrew from the soapbox sport, so-called "fun soapbox races" have been held more and more frequently in addition to races according to fixed regulations, in which, in addition to speed, creativity is also given more attention. Mostly these are organized by non-related associations or commercial companies for marketing purposes . These "fun races" are becoming increasingly popular in Switzerland. After the strictly regulated races lost their popularity, "fun races" are increasingly being held. 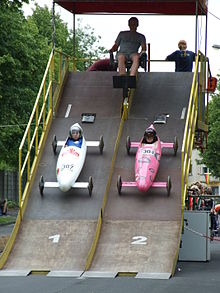 The racetracks are usually between 250 and 500 meters long and have a slight incline, so that due to their condition, a maximum speed of 60 km / h cannot be achieved at any point. The vehicles start from a launch pad. If the safe course of the race is no longer guaranteed in wet conditions, the race must be stopped. The winner is determined from the shortest total time of all runs.

The drivers must always wear protective helmets and the vehicle must be equipped with safely functioning brakes. Precise regulations apply to weight, total length and wheelbase . In Germany the German Seifenkisten Derby e. V. (DSKD) as the umbrella organization. In the approximately 50 races that are organized each year by various clubs and other organizations in Germany, children, young people and adults start in five age and type classes:

Individual organizers, such as the youth welfare organization “Die Schlawiner” in Remscheid, use a special safety engineer to inspect the vehicle . Missing weight can be added in all classes by ballast made of wood or metal.

At races in the different places there are preliminary runs in these classes to the annual German championship, in which the respective winners can participate.

Memorial plaque at the Vordertaunusmuseum, market square in Oberursel

In 1982, at the initiative of the then Opel employee Wilfried Abt, Adam Opel AG gave the city of Oberursel its extensive soap box archive. When the Vortaunus Museum was opened in 1987 , the “fast boxes” could initially be admired in a special exhibition. Later, the colorful speedsters led a rather shadowy existence in a small room in the museum's vaulted cellar. After some reconstruction and renovation work in the main building of the Vortaunus Museum, it was finally possible to show visitors a completely redesigned soap box exhibition.

The newly designed room on the first floor of the museum houses a replica of a children's car, numerous soap boxes, historical photos, components, flags and much more. Short texts inform about 100 years of children's car and soap box races.

The original film material in the archive has been revised and the most impressive film passages have been compiled for the DVD “Soapbox memories of the 50s and 60s of the 20th century”. Museum visitors can also see this piece of contemporary history in the exhibition room.

The oldest "box" dates from 1949 and bears the label "Stars and Stripes - German Youth Activities US Army". In the meantime the exhibition has grown. The youth club Mettinger Seifenkisten Derby e. V. donated a cigar-shaped senior box to the Vortaunus Museum, with which Gerrit Eichholzer won the 52nd German Championship and the 3rd European Championship in Stromberg in 2000.

Since October 3, 2009 there is the first museum in Buggingen that only exhibits soap boxes. This museum was built by Martin Rapp under the leadership of the soap box friends Buggingen. In the museum there are older and original soap boxes from different countries.