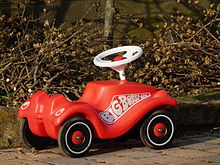 The Bobby-Car is a toy car for young children from the age of twelve months. It is (in the Classic version) a red, almost 60 centimeters long and 40 centimeters high, four-wheeled plastic car. It has been produced by the company BIG-Spielwarenfabrik since 1972 in Germany (until 1998 in Fürth , where it was invented, since 1998 in Burghaslach ). After Ernst A. Bettag's death in 2003, the Simba-Dickie-Group took over the company in 2004. The name Bobby-Car is protected. An alternative designation would be "Lauflernfahrzeug" or "Rutschauto" (because of the sliding on the floor). The Bobby-Car brand has been marketed by the glam licensing agency in Munich since 2010 . In 2005, BIG expanded its range to include the New Bobby Car series, the design of which is adapted to the automotive design of the 21st century.

The almost 2 kg chassis of a standard bobby car is made from colored polyethylene granulate. This granulate is heated to approx. 200 ° C and shaped using extrusion blow molding . After cooling down, the axles , wheels and the steering wheel are assembled , all of which are manufactured using the injection molding process. Around 2,000 Bobby Cars are manufactured every day in the BIG plant in Burghaslach . 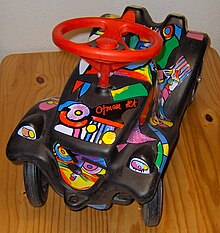 The Bobby-Car was developed to make it easier for young children to learn to walk. There is also a kind of seat shell in the middle in which the child can sit like on a motorcycle. It can move the car around by paddling with its legs. The bobby car has a fully functional steering. Today there are numerous accessories such as push rods, whisper tires, trailers and the like. The basic model is now produced in different colors and designs (e.g. police, Hello Kitty etc.). Special editions were also produced that discard the classic design and are based on contemporary real cars ( Mercedes-Benz SLK , Porsche, etc.). In cooperation with the tire manufacturer Fulda , a special edition was created which, instead of the usual hard plastic wheels without a profile, is equipped with solid rubber wheels with a profile, which are an almost original model of the Carat Exelero high-speed tire from Fulda.

To date, more than 17 million Bobby Cars have been built. According to the manufacturer, this makes it the world's best-selling children's slide-in car.

In the 1990s, adult driver races emerged as another use of the bobby car. The plastic body is stable enough even for adults, but the steering and axles have to be modified due to the increased speeds of up to 100 km / h and more, and the body is poured with concrete to increase the weight. Such a modified bobby car is also known as a downhill bobby car.

Championships, similar to soap box races , are held on closed, sloping streets . The racing season starts in May each year and ends in September. The BIG Bobby Car races are held by the Bobby Car Sport Association. The founding association of this sport, MiniCartClub Deutschland e. V., however, this is not a pure BIG Bobby Car race, as vehicles from other manufacturers (not only BIG) are permitted. Both clubs start in different age groups, from the children's class to the professional class.

The races take place not only in Germany, but also in neighboring countries, e.g. B. Luxembourg or Austria. The races are usually organized by or with the support of various Bobby Car clubs. Throughout Germany there are well over 20 different individual associations that are organized in the corresponding umbrella organizations.

The speed record of a professional racing bobby car according to the official regulations was set by Marcel Paul from the Bobby Car Club Altenhain on September 7, 2012, during the test drive at the Festival of Speed ​​2012 in Gedern , at a speed of 115 km / h set up.

In 2010, the production company Sobeho Records released the children's musical Big-Bobby-Car . It tells the fictional story of the Bobby Car family that waits in vain for the arrival of a new Bobby Car.

The idea for this came from the musician Rainer Grasser, long-time director of the music school in the southern district of Fürth . The production of the musical was worked out together with the producer Caba Kroll. The focus of the musical is the song Big-Bobby-Car , from which the studio producer Henning Reith created a danceable maxi version.

In January 2020, the German artist Roland Eugen Beiküfner produced an object for the exhibition "Waves and Thoughts" with the title "MEERESRETTUNG" with a Bobby Car, a Bobby Car trailer, a swimming board, six Rosenthal glasses, sand from the Baltic Sea, the Mediterranean and the Atlantic and plastic waste.

In August 2012, the daily newspaper taz jokingly named the Bobby Car the “most environmentally friendly car of the year”.