Neumarkt am Wallersee is a municipality in the northeast of the Austrian state of Salzburg with 6402 inhabitants (as of January 1, 2020). The municipality, which is located northeast of the provincial capital Salzburg and consists of twelve individual localities, is partly structured in a rural way. Neumarkt is a focal point of the region, the service sector is also economically dominant. The former market town was raised to a town council in 2000.

Neumarkt am Wallersee is located at 552 m above sea level on the east bank of the Wallersee around 22 km northeast of the provincial capital Salzburg in the district of Salzburg-Umgebung (Flachgau). The municipality is thus part of the Salzburg Lake District . Its maximum west-east extension is around 7.9 km, in north-south direction around 7.6 km. The area is 21.4 km², of which almost exactly a third (mainly the southern part of the municipality) is forested. Neumarkt is part of the judicial district of Neumarkt bei Salzburg with the seat of the district court.

With its location in the Salzburg Alpine foothills , the entire northern urban area around the lake is slightly hilly. In the south and southeast, with the foothills of the Grosse Plaike and the Kolomannsberg, there are elevations of up to around 1000 meters in altitude (highest point in the community: Lehmberg, 1027  m ). Their ridges form the municipal boundaries to Thalgau in the south and Oberhofen am Irrsee in Upper Austria in the east.

Apart from the Wallersee there are no large rivers in the entire city. The streams in the northeast drain to the north into the Mattig , all the others to the west into the Wallersee and then over the Fischach into the Salzach .

The city consists of the four cadastral communities

The twelve individual villages and their population numbers (as of January 1, 2020) are

The municipality is a member of the regional association Salzburger Seenland and the Seenland Tourismus GmbH.

The city borders the following municipalities:

Neumarkt am Wallersee was founded according to plan by Salzburg's Archbishop Eberhard II around 1240. The decisive factor was the location on the northern border of the archdiocese , where the sovereign needed a “guard” to consolidate his presence. Within a short period of time, the Novum Forum (= new market) assumed a key economic position. The privileges that Neumarkt was endowed with - the toll law, the bar and trade privilege, the right of residence and the weekly market law  - contributed significantly to the fact that Neumarkt am Wallersee developed into an economic hub. The lively business traffic particularly favored the establishment of larger trading companies, restaurants , mills and tanneries . To meet the local demand for beer, no fewer than five breweries were built here .

The two Prince Archbishops Wolf Dietrich von Raitenau and Paris Graf von Lodron expanded Neumarkt into a fortress and border bastion in the 17th century. The Salzburg cathedral master builder Santino Solari was commissioned in 1638 to build the bulwark as a defensive structure . Neumarkt also became the seat of the Neumarkt nursing court .

The second coalition war in 1800 and the third coalition war in 1805 hit the community badly. Finally, the great market fire of 1879, which destroyed eighty objects, and the parish church fire in 1887 caused devastating damage to the people of Neumarkt. The community only recovered after the Second World War. More and more guests followed, and its importance as a central location and focus community for services in the entire region increased rapidly. At the request of the municipality, the Salzburg state parliament decided in 2000 to raise Neumarkt am Wallersee to the status of a municipality , which was implemented on September 24 of the same year, the Salzburg state holiday.

The city's coat of arms is: "In gold, a red, left sloping bar, in the upper field a silver, red-tongued lamb growing out of the bar". 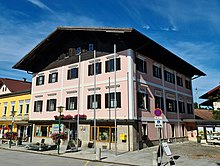 See also:  List of listed objects in Neumarkt am Wallersee

The place Sommerholz and the local baroque branch church of St. George are on the pilgrimage route Via Nova . A Georgi ride takes place there every two years . The Austrian section of the Way of St. James also leads through Neumarkt am Wallersee .

There are four musicians' associations in Neumarkt:

In the education sector, Neumarkt has a school center with

In addition to the usual administrative and supply facilities of a municipality, there is also a district court in Neumarkt. The social facilities include a library and a retirement home.

The city has several sports facilities (soccer field, tennis courts, volleyball court), and on Wallersee there are two bathing beaches as well as a surf school and a marina. There is also the possibility of boat and bike rental. There is also a campsite by the lake. There is a hiking trail leading around the entire lake. There are also hiking opportunities in the southern mountains. The Mozart Cycle Path also leads through Neumarkt , a cycle path that leads from Salzburg and Flachgau over parts of Upper Bavaria to North Tyrol.

Neumarkt also has a share in the Wallersee-Wenger Moor European protected area on the north bank of the Wallersee .