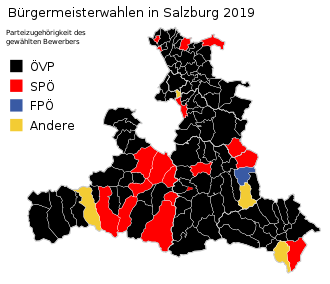 Mayoral elections: the candidates with more than 50% of the vote were elected in the first ballot

The municipal council and mayoral elections in Salzburg 2019 were held in the province of Salzburg on March 10, 2019.

As a result of the election, the mayors of 108 municipalities were elected in the first ballot, ie they received more than 50% of the vote. In 11 municipalities (city of Salzburg, Hallein , Seekirchen , Oberndorf , Zell am See , Elsbethen , Mattsee , Bad Hofgastein , Oberalm , St. Johann and Straßwalchen ) no candidate achieved an absolute majority, so that a runoff election took place on March 24, 2019. In the city of Salzburg, the ÖVP mayoral candidate came first in the first ballot with 41.4%.

Municipal council and mayoral elections in the state of Salzburg